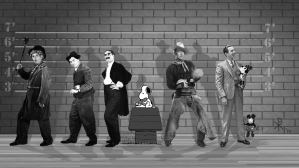 Who wrote the Bible?

Welcome back to our series on the authorship of the Bible. In this post we will explore evidence that points to Matthew, Mark, Luke, and John as the writers of the four canonical gospels.

Setting aside for now discussions about canonicity, inerrancy, and textual criticism, how much confidence can we have that the four gospels were written by their traditionally-accepted authors?

Because none of the gospel writers identified themselves by name as the author of the text, these foundational books of the Christian faith remain technically anonymous. It is no surprise therefore that skeptics seek to discredit the claims of Christianity by questioning the traditional authorship of the gospels. Likewise it is no surprise that well-meaning proponents of the faith get in over their heads when it comes to defending the traditional authorship. As you can see from spirited discussions like this one (be sure to read the comments), the facts can easily become blurred by the voices entangled in debate. Our position on Veracity is that we’re all about the truth and that readers can decide for themselves without being told what to think. Personally, I think scholars give themselves too much credit for what they ‘know’−on both sides of the debate. Worldviews influence interpretation. Got it. END_OF_DOCUMENT_TOKEN_TO_BE_REPLACED

4 Comments   |  tags: Areopagus Journal, Chrisitianity, Hierapolis, How We Got the Bible, Nestle-Aland Critical Apparatus, The Gospels, veracity, Who Wrote the Bible? | posted in Apologetics, The Gospels