Heaven and Hell: by Bart Ehrman, An Extended Review

The historical development of these ideas is the subject of Bart Ehrman’s Heaven and Hell: A History of the Afterlife. Bart Ehrman is perhaps the world’s best known critic of evangelical Christian faith, having grown up in the evangelical world until he deconverted out of it in graduate school. His New York Times best selling Misquoting Jesus has made him one of most widely read biblical scholars in our day at the popular level, sought after by the media almost every time a major story arises within Christianity.

With such a title, Heaven and Hell: A History of the Afterlife really peaked my interest. As you will read in this review, I really got into it and made dozens of notes. For over the past few years during the COVID pandemic, I have known of several friends who died of the disease, some of whom were at a relatively young age. I, myself, had a close brush with death about four years ago, after an automobile slammed into my bicycle on a busy road, throwing me back into the driver’s windshield. Thankfully, the only major injury I had was a concussion, that knocked me out cold for about an hour. The paramedics told me that I could have easily died, if the driver had hit me at a higher rate of speed. So, the topic of the afterlife is pretty pertinent to me, a lot more urgent than when I was a teenager, when I thought I was invulnerable to death. 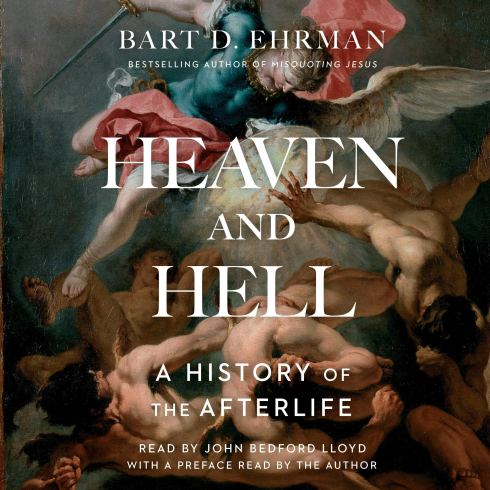 END_OF_DOCUMENT_TOKEN_TO_BE_REPLACED

I did one of these back in 2020, but some fairly big news stories warrants another installment for this year. First, some might have heard that BibleGateway.com has removed the Passion Translation from its website. I found the following meme on Brent Niedergall’s biblical studies blog that made me chuckle, based on the Star Wars theme:

What was all of the fuss about? Well, the Passion Translation, advertises itself as “a modern, easy-to-read Bible translation that unlocks the passion of God’s heart and expresses his fiery love—merging emotion and life-changing truth.”

Well, a number of Bible scholars and pastors think otherwise. The Passion Translation has been popular among a number of charismatic and Pentecostal Christians, written by a missionary who has faithfully served for the Gospel in Latin America for many years, Brian Simmons, who claims to utilize the original languages, Hebrew and Greek, and … wait for it … Aramaic, to produce the English text. While we can commend the good natured intent, the problem with the “Aramaic” part is that relatively little of our ancient original sources for the Bible are actually found in Aramaic. It makes one wonder what the publisher means by “Aramaic.”

As a paraphrase, the Passion Translation has a lot of interesting ways of freshening up the text. But as British pastor/teacher Andrew Wilson puts it, the problem is that the Passion Translation is marketed as a translation, when it really should be called a paraphrase. The promotional materials claim: “Recent biblical scholarship has begun tracing many of Jesus’ teachings back to an original Aramaic source. Some even argue the original Greek manuscripts were translations of even more original Aramaic sources.”  Wilson contacted Australian theologian, Michael Bird, who was cited as an authoritative source for this claim, and Wilson’s way of telling it is quite colorful:

‘I actually followed this up with Mike Bird, and his response was short and to the point; I won’t quote it, but it was effectively Australian for “I don’t think this person is correct.”’

YouTube apologist and pastor Mike Winger did a whole slew of videos, interacting with scholars who found all sorts of issues with the Passion translation (Craig Blomberg, Douglas Moo, Alex Hewitson and Brad Bitner, Tremper Longman, Darrell Bock,  Mike Winger’s one hour summary). If you have any charismatic friends who absolutely love the Passion Translation, you might want to send them a few of these Mike Winger YouTube videos.

Probably the bigger news this year concerns the recent update to the New Revised Standard Version (NRSV) for 2021/2022, marketed as NRSVue, or NRSV Updated Edition. The NRSV is the endorsed Bible of the National Council of Churches, and the NRSV is pretty much the standard in mainline circles and in academia.

The older NRSV comes from a completely reworked version of the 20th century mainline standard translation, the Revised Standard Version (RSV), which was put together starting in the late 1940s with the New Testament, followed by the finished Old Testament being published in 1952 (some did not like the RSV then). After World War II, the National Council of Churches was known as the American wing of the World Council of Churches, resulting from a renewed emphasis in the ecumenical movement and world evangelization, after military servicemen were scattered all across the world, fighting in World War II. Since then, the National Council of Churches (NCC) appears to have drifted to the left theologically, as conservative evangelical churches kept their distance from the NCC. Along with that was skepticism among many evangelicals towards the NCC standard bearer Bible, the RSV….. despite the fact that one of my favorite professors in seminary loved the late 1980s edition of the RSV.

By the late 1980s, it was felt that the RSV was getting a bit “long in the tooth,” so the NCC bagged it. Interestingly, the conservative evangelical book publisher, Crossway, picked up the copyright of that old RSV, made some changes more suitable for conservative readers, and released a new Bible, the English Standard Version (ESV). While the venerable King James Version (KJV) and the New International Version (NIV) still remain the most popular Bible translation for conservative evangelical Christians, support for the ESV appears to be gaining more and more as the years go by.

The NCC decided to go with a different approach and came out with the NRSV in 1989, which became controversial for its use of “gender-neutral language.” In partnership with the Society of Biblical Literature, the NRSV Updated Edition (NRSVue) was finished in late 2021. A massive 10,000 substantial edits were made to the original NRSV, with 20,000 minor revisions, many of them described in this paper put out by the publisher. The NRSVue is destined to become the mainline standard Bible translation, superseding the previous NRSV. Here is a short sample of some of the changes:

Do not let the reference to “mainline” scare you immediately, as the NRSVue is really one of the most competent translations available (… although there is a catch, as I will note in a moment). In my Bible reading, I like to compare popular evangelical Bible translations, like the ones I love, such as the English Standard Version (ESV), the New International Version (NIV), and the Christian Standard Bible (CSB) with the NRSV, … and now the NRSVue. In many ways the NRSV/NRSVue actually offers a more word-for-word sense of what the text is saying, in some cases. I frequently use the Harper Collins Study Bible, which uses the NRSV, to see if the NRSV will keep some of the other translations honest.

Nevertheless, the catch with the NRSVue is there is still an interpretive bias that peeks through every now and then, which tends to be progressive, appealing to its more liberal National Council of Churches constituents. More and more progressive elements have made their way into the new NRSVue. For example, The Institute on Religion and Democracy posted a pretty scathing review of the new NRSVue.

The most controversial example comes from the Updated Edition’s revision of 1 Corinthians 6:9-10:

The highlighted phrase “men who engage in illicit sex” is more ambiguous, as compared to the same phrase found in something like the Christian Standard Bible (CSB): “males who have sex with males.” The CSB rules out all sexual relationships between males, whereas the NRSVue leaves a door open. Is it therefore possible for men to have non-illicit sex with one another, and that still be okay in the Apostle Paul’s mind? On the other hand, other passages in the new NRSVue that deal with the same topic are more traditional, like Romans 1:27:

… and in the same way also the males, giving up natural intercourse with females, were consumed with their passionate desires for one another. Males committed shameless acts with males and received in their own persons the due penalty for their error.

As YouTube apologist and Bible reviewer Tim Frisch points out, the NRSVue has plusses and minuses with it.

On the flip side, in another important area, the NRSVue is using recent insights from the Dead Sea Scrolls, more so than other modern translations, to give us a more and more accurate Old Testament. So that is a good feature.

It is also important to note that a number of the biblical scholars working on the NRSVue project are simply well-regarded scholars, who may or may not be persons of Christian faith, though most are professing Christians.

One final note to add to this 2022 Bible translations update: The so-called Legacy Standard Bible, that came out over the last couple of years, got a revision recently. For those unfamiliar with the Legacy Standard Bible (LSB), you mind be interested to know that this translation was done by seminary professors at the Master Seminary, the seminary associated with Southern California pastor John MacArthur. Tim Frisch highlights some of the changes.

For you American readers of Veracity out there, I hope you have great Fourth of July weekend!!

Mark Ward put out a video on the NRSVue controversial readings just a few days after I published this post. This is excellent and sober analysis: