Did Jesus “Descend into Hell?” (Explained in 3 Minutes)

So, what did Jesus do between his death on Good Friday and his Resurrection on Sunday morning? The early church had a line in the earliest known creed, the Apostles Creed, which reads “He descended into hell,” according to the 1662 version of the Book of Common Prayer, the version familiar to most English readers.

Most Christians who affirm this creed, and believe it, recite this line without thinking much about what it means. Other Christians refuse to recite this part of the creed, believing that this line is not in alignment with the Bible. So, what’s story with the whole “descended into hell” stuff? Is it in the Bible or is it not?

The CredoHouse, out of Oklahoma, develops fantastic educational resources geared to help average Christians gain a handle on advanced theological concepts. I highly recommend them for use in adult Sunday School classes. In this 3-minute video snippet, Michael Patton, the lead instructor at the Credo House, does a great job succinctly tackling the subject that would probably take hours to sufficiently unpack.

The key controversial verses behind the “He descended into hell” clause are mainly Acts 2:31, 1 Peter 4:6, and 1 Peter 3:18-20, leading many Christians to traditionally believe in the so-called “Harrowing of Hell,” when Jesus preached to the souls that died previously to the appearance of Christ upon the stage of world history. Listen to how Michael Patton summarizes other various viewpoints.

The Heart of the Gospel: The Death of Christ (Explained in 90 Seconds)

As Christians remember the darkness that covers Good Friday, let us prepare ourselves for the light of Christ’s Resurrection.

I am not always encouraged by how he interacts with other points of view, on non-essential doctrines, but in this 90-second video, promoting his latest book, California pastor John MacArthur draws out a key verse from Isaiah 53, to explain the heart of the Gospel, the death of Christ.  The only thing I would tweak would be to clarify that the Son of God was in complete union with the Father, such that the Father and Son fully gave together, to satisfy the requirements to deal with sin, and reconcile us to God.

“Chrislam,” Rick Warren, and the Internet Lie That Never Dies

Christians are called to be people of the truth (John 17:17). Sadly, some Christians have a persistent habit of misrepresenting the truth, by the way they (mis)use the Internet.

Take the example of pastor Rick Warren and the supposed “Chrislam” controversy. Rick Warren is the pastor of Saddleback Church in Southern California. For years, Rick Warren has taken an interest in building relationships with Muslims, so that they might hear the Gospel of Jesus. As Rick Warren says, “You cannot win your enemies to Christ. You can only win your friends.” Yet as a pastor of one of America’s largest churches, such a high profile personality comes under a lot of scrutiny.

Sadly, another Christian leader, a tele-evangelist (I will not name the man), became suspicious of Rick Warren and popularized the terminology of “Chrislam,” accusing Rick Warren of trying to combine Christianity and Islam together into a single new religion, and denying the faith. Rick Warren, in 2011, publicly denounced the accusations as false.

Now, just to be clear, I have no dog in this race. I have never met Rick Warren. I have never been to his church. I have never heard him preach, but others tell me that he is a great evangelist. I read a short pamphlet/book he wrote a few years ago, and I thought it was somewhere between pretty good and OK. Not the best thing I have ever read. But not bad either. I am sure God has and will continue to use his writings to change the lives of many people. It just was not necessarily the type of reading I personally go for.

In 2012, an article in a local, secular newspaper, the Orange County Register, printed a story that sought to confirm the reports of Warren’s “Chrislam” views and activities.  Unfortunately, the newspaper article contained many errors, according to Saddleback Church. Shortly after the article was published, Rick Warren made statements intended to correct the misinformation. Sadly, some Christians, including the above mentioned tele-evangelist, spread the Orange County Register story, like wildfire on TV and the Internet, without ever bothering to ask Rick Warren directly, if the story was accurate or not.

Fast forward to 2018, and if you do a Google search, for something like “Rick Warren chrislam,” you will get an amazing 200,000+ hits, most of them repeating the same type of accusations made six years earlier in 2012, that Rick Warren addressed within days of the Orange County Register article.

It is like the Internet lie that never dies.

If you have been tempted to pass on such old rumors like this to your friends, there is this pesky little command, in the Ten Commandments, that you might want to be aware of:  “You shall not bear false witness against your neighbor” (Exodus 20:16).

The video below should pretty much dispel such rumors, which is an interview that Rick Warren had with a leading Calvary Chapel pastor, a year or two ago. Much of the lingering controversy involves Rick Warren’s signature in 2007 on a Christian response to the Yale “A Common Word” document, written by Muslim leaders. The Christian response was open to misinterpretation on several points, but it was meant to commend Muslim attempts to call for peace and dialogue, and rejecting violence, and not to be a final statement on doctrine. For more about the related “A Common Word” Yale document, see this earlier Veracity post.

What Happens When A Believer in Jesus Dies? 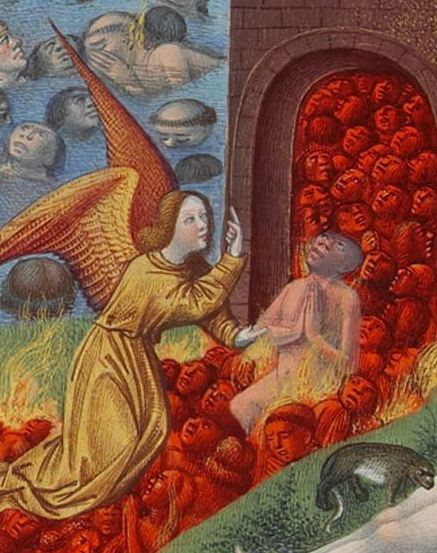 What happens when you die? That is a good question.

In the history of the church, the concept of purgatory looms large. But purgatory has had a bad rap with (most) Protestant Evangelical Christians, ever since Martin Luther made his famous protest in the 16th century, against indulgences. Purgatory is a doctrine that tries to explain what happens during the so-called intermediate state, and it captivated the mind of the Western medieval church, and still remains official Roman Catholic church teaching today. Like (most) Protestants, the Eastern Orthodox also reject the Roman Catholic legalistic framework of purgatory, but they agree with the ancient practice of prayers for the dead, admitting to some ambiguity on the question, more than what most Protestants will tolerate.

I include the caveat of “most” Protestants rejecting purgatory, as there have been notable exceptions in the minority. The influential 20th century apologist C.S. Lewis was known to be drawn to the doctrine. In the early 21st century, Protestant theologian Jerry Walls has written extensively defending what he believes to be a “biblical” view of purgatory. Then there are the views of Charles Augustus Briggs, a late 19th century American Presbyterian theologian, whom we will focus on in this blog article, who raises some interesting questions, suggesting some form of purgatory, though not exactly like what Roman Catholicism teaches.

So, what is purgatory, generally speaking? Purgatory is not hell, but neither is it exactly heaven.  It is more like a preparatory stage before a believer can enter heaven. The lingering effects of sin, after death, must be “purged” before a believer fully and finally enters the presence of God.

The Protestant Reformation rejected the medieval, Western Christian view of purgatory, largely because the Scriptural support for it was found to be lacking. Purgatory owed more to the accumulation of Western tradition than it did to solid exposition of the Bible. Just ask any informed Protestant Christian.

But does the Bible specifically rule out purgatory, as a possibility? That turns out to be a very interesting question, too. It stems from the fact that not all Protestants agree on what is the best, most Scriptural alternative to purgatory. The reality is, the question of what happens when we die, for believers, remains somewhat of a mystery. END_OF_DOCUMENT_TOKEN_TO_BE_REPLACED 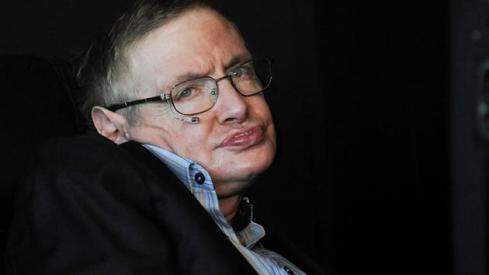 I was munching on my second piece of pie this afternoon, when I heard the news that Stephen Hawking had just died.

I work at a university, and it can be a geeky place, at least for the scientifically inclined. Stephen Hawking was not simply a brilliant scientist, who managed to think big thoughts, even while dealing with a terribly debilitating disease. He was an international celebrity, a champion for a scientific worldview. So, it is only fitting that Hawking would end his earthly life on what is now known as “Pi Day,” the mathematician’s holiday, March 14…  ( 3.14… get it??)

Science has a certain allure, in that a growing segment of the world’s population believes that science can solve the world’s problems. Many have left “religion” behind, particularly Christianity, as Western culture has been gradually, yet successfully, displacing Christendom with a secular world outlook. We see this in the story of Stephen Hawking.

I first read his wonderful and amazing A Brief History of Time over a Christmas break, and it still leaves my head spinning. This was Hawking’s 1988 blockbuster popular science book, that sought to put heavy-duty concepts like the Big Bang, gravity, and the nature of time down on the bottom shelf. During those days, Hawking indicated that the laws of physics “may have been decreed by God, but God does not intervene to break the laws.” But within a few years, Hawking began to change his tune: “It is not necessary to invoke God to … set the universe going.”  By 2011, he made this statement on a Discovery Channel documentary, “We are each free to believe what we want and it is my view that the simplest explanation is there is no God. No one created the universe and no one directs our fate.”

Well, science does have extraordinary explanatory power, but there is quite a bit of hubris in Hawking’s statement. Someone put some humor to this, in a Twitter feed: 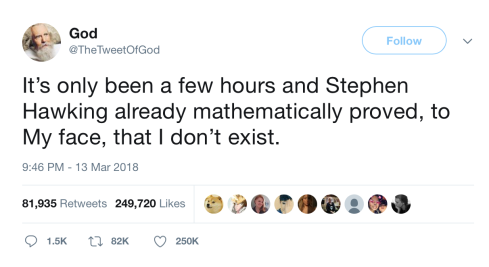 Yes, the world has lost an extraordinary human being, in Stephen Hawking. Nevertheless, a more modest assessment of what science can and can not do, is sorely needed. This is where informed Christians need to step up to the forefront, and engage our culture. Trying to use science to somehow “prove” God is not going to work. What we need to show is that science does not stand in conflict with the Christian faith. We need to artfully say that the story of the Bible has the greatest explanatory power, that includes, not excludes, the story that science is trying to tell.

Christians are great consumers of science-inspired technologies, from Google to iPhones to modern medicine. However, many Christians see science itself as a threat to faith, or they are too busily occupied with disputes among themselves to engage the great challenges of our day. This does harm to the witness of the church. Believers need to stand together. Let us pray that Christians gain the wisdom and the courage to boldly tell the story of Jesus Christ to a skeptical world.