Idols and Images: Ten Commandments, Yes, But How Do You List Them? 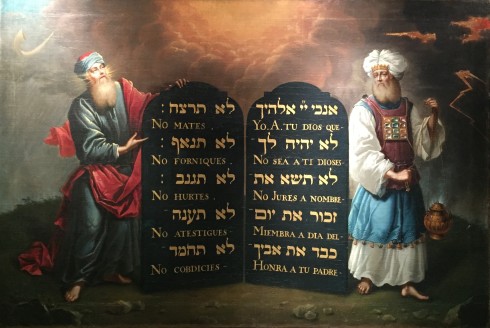 Moses and Aaron, with the Ten Commandments: Aron de Chaves (1674)

I received a little pushback offline on a previous post about dream catchers. I kind of expected that.

The Ten Commandments are derived from two passages from the Bible, Exodus 20:1-17 and Deuteronomy 5:4-21, texts that are very close to one another in content. But careful study demonstrates that not every Christian identifies all of the commandments in the exact same manner. However, contrary to some misguided assertions, there are no mainstream Christian traditions that have “changed” the Ten Commandments. Rather, the problem is in how different traditions have grouped the various commandments together.

An obvious question to start off with would be, so why “Ten” commandments? Well, we have three passages in the Bible that directly tell us of “ten words” given to Moses at Sinai (Exodus 34:28, Deuteronomy 4:13, and Deuteronomy 10:4).

However, the Bible was not divided up into a verse numbering scheme until the Protestant Reformation, in the 16th century. Therefore, in the early church, there was no intuitively clear way to group the Ten Commandments together. Even the Jews have had their own unique pattern of grouping the “commandments,” and it has not matched 100% with any Christian version. END_OF_DOCUMENT_TOKEN_TO_BE_REPLACED