Should a Christian Have a Dream Catcher in Their Car? 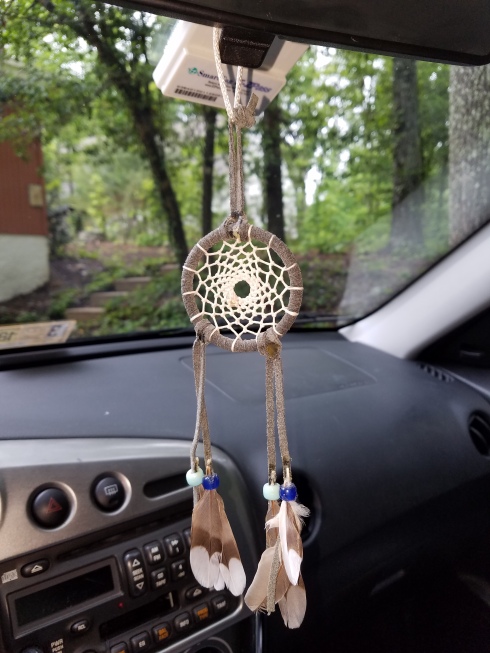 A number of years ago, my parents took a cruise ship to Alaska. On that trip, my mother found an attractive dream catcher, and she gave it to me as a birthday gift. I hung it up in my car, around the rear view window mirror, just as a way to remember her, and her thoughtful gift to me.

So, I was really caught off-guard a few years later, when a Christian friend of mine was offended that I had that dream catcher hanging in my car. Some Native American cultures historically revere dream catchers as religious symbols, intended to protect children from bad dreams and evil spirits. But the larger Pan-Indian movement in the 20th century, in an effort to raise awareness of Native American cultures among the majority population, adopted the dream catcher as a cultural symbol. Not all Native Americans share the exact same spiritual beliefs as the Ojibwe tribe, from where the dream catcher most probably originated years ago. My mother looked at it as a memorabilia keepsake, something she wanted to give to her son.

I support most of what Oakes is saying, but I take a different personal position. It is important to remember the context for Romans 14. There were Christians in the first century, who came out of pagan backgrounds, where eating food sacrificed to idols was readily practiced. Such practices would offend the conscience of those believers from those backgrounds, so this is why the Apostle Paul urged other believers, from different backgrounds, to carefully avoid insulting the conscience of the more sensitive believers, by avoiding such practices.

In the case of my Christian friend who objected to my mom’s dream catcher, this friend had no Native American background. Much less did this friend have any association with the Ojibwe tribe. Neither was this true of my mom, nor myself. Therefore, it was not anyone’s conscience that was being “offended,” but rather it was the rumored idea my friend had in their mind, of a dark power, that possibly someone, somewhere might be troubled by the presence of a dream catcher.

Though I appreciate my friend’s concern, that followers of Christ should reject idols, my response is this:

The effort that we could expend in trying to remove all  things in our lives that might possibly offend someone, somewhere in the world, is a fool’s errand. To apply Romans 14 in this manner, takes the text out of its appropriate, New Testament context. It would be a form a perverse legalism to constantly police our lives, searching for those practices or artifacts that might trouble someone, somewhere. The meaning of symbols constantly changes across various cultures today, being appropriated and re-appropriated with different meanings, quite frequently.

For example, the radical Islamic State (ISIS) has destroyed countless precious cultural artifacts of ancient Syrian culture, all in the name of stamping out idolatry. Technically, those Muslims were right in declaring various statues as polytheistic idols, from a past era. But would someone be tempted to worship these idols today? Possibly, but this is highly, highly unlikely. Most moderns view these artifacts as testimonies to history, and we therefore grieve their loss. As such destructive ideological extremism spreads, the preservation of valuable cultural heritages becomes more important than ever.

Just think about the evolution of the swastika, discovered by archaeologist Heinrich Schliemann, and more recently, the Confederate flag. At one time, these were symbols with positive meanings, but not anymore.

A popular, American Coca-Cola pendant, before the Nazi’s adopted the swastika as their symbol, and ruined it for everyone.

As Christians, we regularly use terms like “Sunday,” “Monday,” “Tuesday,” “Wednesday,” etc., to describe the days of the week. The Quakers of the 17th and 18th centuries refused to use that terminology for weekdays, as those names correspond to pagan gods, which were worshipped hundreds of years ago, during the pre-Christian era of Europe (the same logic applied to the first eight months of the Roman calendar). So those early Quakers would use terms like “first day,” “second day,” “third day,” etc., all very biblical terminology, to faithfully describe the days of the week. But to my knowledge, there are no people today, nor in the 17th century, who come or came from such pagan backgrounds, who might have or had such sensitive consciences. I do not see Christians today clamoring for altering the names of weekdays, who wish to rid our minds of such supposedly pagan mindsets, who might be tempted to worship the sun (Sunday), or the moon (Monday), or Thor, the god of war (Thursday).

Now, suppose I actually know someone, who would ride in my car, who really came from a background, where a dream catcher did possess some religious or spiritual meaning. They might see my dream catcher as an implicit endorsement, tempting them towards a spiritually harmful practice.

This would be an area where Romans 14, with respect to “disputable matters,” would be applicable. I would hope that in this case, I would discreetly take down my dream catcher, and slip it into my glovebox. I would not want something I have to become a stumbling block in their journey towards Christ.

But until then, I like having that dream catcher visible, as a way of remembering how much my mother cared for me. If there are any other Christians, who continue to object, I would say this: They probably have too much time on their hands, and they would be better off putting their efforts to rid our lives of “idols” to better use.

Clarke Morledge -- Computer Network Engineer, College of William and Mary... I hiked the Mount of the Holy Cross, one of the famous Colorado Fourteeners, with some friends in July, 2012. My buddy, Mike Scott, snapped this photo of me on the summit. END_OF_DOCUMENT_TOKEN_TO_BE_REPLACED
This entry was posted on Tuesday, May 16th, 2017 at 6:24 pm and tagged with disputable matters, dream catchers and posted in Apologetics. You can follow any responses to this entry through the RSS 2.0 feed.
« The Quest for the Historical Saint Francis
Who Is Clarke Morledge? »

6 responses to “Should a Christian Have a Dream Catcher in Their Car?”