The Silver Chair: C.S. Lewis Against the Seduction of Secularism 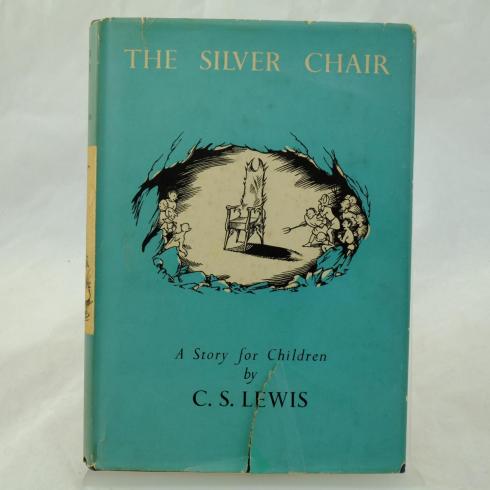 C.S. Lewis’ 1953 fantasy children’s novel has a scene where Jill and Eunace, the human children, along with their faithful, yet gloomy companion and Marsh-Wiggle, Puddlegum, have been living underground, for what seemed like forever. In their search to find Prince Rillian, they were stuck in a maze of dark caverns and sailing the Sunless Sea, in a world governed by a witch, the Lady of the Green Kirtle. The children and Puddlegum have not seen the sun for a long, long period of time. The Green Lady seeks to enchant the others, in hopes of preventing them from returning to Narnia, and meet up with Aslan:

“There never was a sun,” said the Witch.

“No. There never was a sun,” said the Prince, and the Marsh-wiggle, and the children.

For the last few minutes Jill had been feeling that there was something she must remember at all costs. And now she did. But it was dreadfully hard to say it. She felt as if huge weights were laid on her lips. At last, with an effort that seemed to take all the good out of her, she said:

C. S. Lewis had grown up as an atheist, eventually becoming a Christian, where the love of Christ showed him the truly reality of things. The Green Lady represents for Lewis the seductive power of secularism, bent on keeping us from seeing reality, as it really is. Prince Rillian had been imprisoned, in a spiritual haze, by the power of the Silver Chair, keeping him in spiritual bondage. The Green Lady was hoping to lure the young humans as well into her control, and away from Aslan.

But the children, Puddlegum, and the Prince were able to break free from the clutches of the Green Lady. The Green Lady was exposed as a deceptive serpent, and killed by Prince Rillian. The group was then able to clearly make their way back to the surface, and see the sun again in Narnia.

While there are many competitors to a Christian worldview, I find that Lewis had it right, that the greatest threat of all is secularism, whereby “religion” is shoved into a little, privatized corner. The “real” world, according to secularism, is a world whereby God is dismissed as a fantasy, an irrational, non-evidenced belief, that has been superseded by the world of reason, science and technology. The belief in “scientism,” that contends that only that which can be demonstrated scientifically is really true, reigns supreme in a secular world. The supernatural world of Narnia is merely an illusion, a “virus of the mind,” to quote Richard Dawkins.

The secular atheist rejects the God of the Bible because of insufficient evidence. There is no “sun” and there is no “Aslan” because we have not seen either, living in this secularized world. Well, at least, we have seen no evidence for either in a really, really long time.

And yet, Jill was compelled to remind the others about Aslan.

Like Jill, the Christian community is that assembly of people who are called to remind others about Aslan, to bear witness to the story of Jesus, the truth of the Gospel.

Sadly, there are times whereby the Christian church has reversed the roles, content to live in the land of the Sunless Sea herself. I have spoken with many an agnostic or atheist, who felt a sense of relief, when they were able to crawl out of their experience, in what they perceived as the dark world of “Christianity,” and discover the world “above” whereby they see the “sunshine” of reason, empiricism, and scientism.

I find that when atheists adopt this narrative, it is generally an indicator that the kind of “Christianity” that they emerged out of is one of a Christian community that has forgotten its true calling. Such a distorted “Christianity” has resorted to a type of navel gazing, that seems so self-absorbed with its own internal affairs, that it has forgotten its primary mission; that is, to be the Jills of planet earth, to remember and speak out words of true hope to a lost world, “There’s Aslan.”

After all, properly understood, the Christian faith is not opposed to rationality or scientific exploration. There is no war between the Bible and science.

Nor does genuine Christian faith seek to impose some archaic standard of morality on others today, merely lifted out of a Bronze age, that is better left forgotten. Rather, Christian morality seeks to illuminate the true of nature of what it means to be human.

Furthermore, a distorted “Christianity” often loses sight of the unity believers are called to have with one another.  As author Mac Pier puts it, “Disunity within the church breeds atheism in the world.” Such disunity can often introduce discouragement among the believers, such that we care less about God’s larger mission, to spread the Good News of Jesus. Instead, many Christians will often travel the path of least resistance, going along with the flow, seduced by the voices of the Green Ladies of this life.

As a Christian, are you being lulled into the enchantment of a purely secular world, or are you like Jill, who must remember something at all costs?