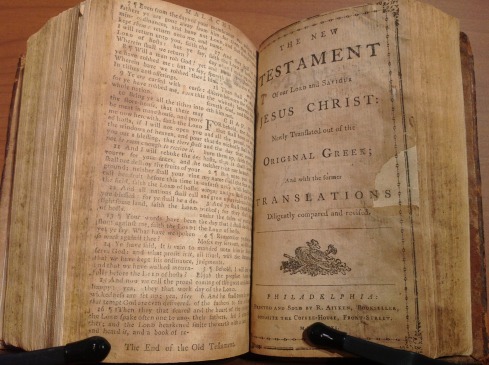 The Aitken Bible, the “Bible of the American Revolution,” remains a source of confusion, for many Christians today. A rare copy of this Bible is on display at the new Museum of the Bible.

The Museum of the Bible, which opened in Washington, D.C. in November, 2017, seeks to educate visitors about the role of the Bible in America. We need such a museum, as an examination of the evidence reveals a number of misconceptions people, even some Christians, have had about America and the Bible.

Prior to the American Revolution, most of the colonies embraced some form of public commitment to Christianity. For example, in those days, the Church of England was the official faith of my native state Virginia (then a colony), supported by law and the collection of taxes. If you considered yourself an “Episcopalian” or an “Anglican,” you were in good company.

But if you were a Baptist, you might have problems. For example, weddings performed by Baptist clergy were not legally recognized in the colony of Virginia. So, if you were Baptist, and you could not abide by the wedding liturgy of the Church of England, you were in trouble. For according to the law, you and your Baptist spouse would be “living in sin,” unless an Anglican priest married you.

The favoritism towards the Church of England, in Virginia, lasted through the Revolutionary War period. The Church of England, which became the “Episcopal Church” in America, was finally disestablished in the new state of Virginia, in 1786. This was accomplished by the passing of the Virginia Statute for Religious Freedom, a document anticipating the religious freedom clauses of the federal Bill of Rights, amended to the U.S. Constitution, in the early 1790s. The traditional link between Christian church and state was effectively broken, by America’s Founding Fathers. But even as late as 1902, Virginia’s religious freedom clause, in the state constitution, still maintained this admonition, originally written in 1776, “it is the mutual duty of all to practice Christian forbearance, love, and charity towards each other.”

Therefore, a common secularist canard, that Christianity was never really part of the founding of America, can be easily dismissed. True, Christianity, broadly speaking, was not, in a strict sense, the “official” religion of America, in the early decades of the young republic. The Founding Fathers, and American leaders after them, were certainly not opposed to the spread of Christianity, but they were increasingly inclined not to make explicit, governmental endorsements of the faith. However, for all practical purposes, Christianity was the de facto standard of faith, towards the latter end of the 18th century, and even into much of the 19th and early 20th centuries.

Let us consider the evidence: You should take a minute to view the following YouTube advertisement, promoting the Museum of the Bible’s (MOTB) grand opening. On display is the so-called Aitken Bible, what the museum calls “the Bible of the American Revolution.” Pay careful attention to how the MOTB frames the story, and then keep reading: