The Bible, Rocks and Time, A Review 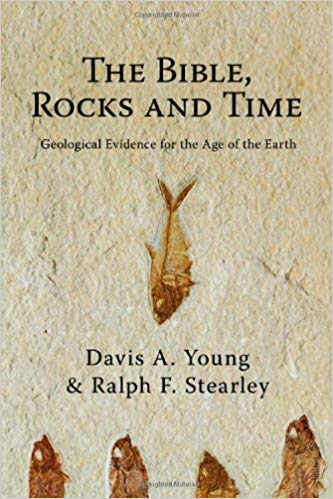 The Bible, Rocks and Time. Davis A. Young and Ralph F. Stearley make a definitive and exhaustive case for Old Earth Creationism, from a geologist perspective.

I remember the day I stumbled across Davis A. Young’s, Christianity and the Age of the Earth, tucked away on the “new books” shelf of my college library, in the spring of 1983. Friends had invited me to attend a Wednesday night Bible study, studying the Book of Genesis, in the home of a local pastor. My head was swirling with confusion, as I learned all about the idea that the earth was only 6,000 years old. But in my science classes, ever since falling in love with science as a first-grader, I was learning a quite different story, of the modern scientific consensus, that the earth was 4.54 billion years old.

My college pastor was (and I am sure, still is) one of the sweetest and kindest of men I have ever met, a genuine, sincere and godly person. He did not have much of a science background, but he was passionate about the truthfulness of God’s Word, and I was eager to learn. He just “knew” that the “days” of Genesis were literal 24-hour periods, which for him, implied a Young Earth.

My science professors at college, on the other hand, several of whom told me that they were Christians, had relatively little knowledge of the Bible, as compared to my pastor. But they assured me that the great antiquity of the earth was well established, beyond a reasonable doubt, a reality that I had known at least something about since elementary school.

So, who was right? My pastor? My science professors? How was I to sort this whole thing out?

My questions had landed me into having a full-blown crisis of faith. I had not grown up in an evangelical church, so I had no background in skepticism about radiometric dating methods, that so many kids today in home-schooled families regularly ingest, from their online science curriculums.  But I had also become a follower of Jesus in high school, having realized that my nominal church upbringing was pretty weak when it came to understanding the Bible and its authority. So, here I was in college, confused as to whom to believe. Do I trust my pastor? Do I trust the scientists? Is the truth of Christianity tied to a belief in a 6,000 year old earth, contradicting the modern, scientific consensus? END_OF_DOCUMENT_TOKEN_TO_BE_REPLACED