Was Jericho a “City” or a Military Fortification? 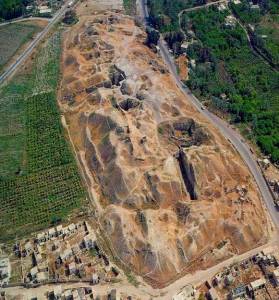 The ruins of ancient Jericho, scarred by over a hundred years of archaeological digs, as seen from the air. It would probably take no more than an hour or so to walk around the “city.”

I had the privilege of visiting the Holy Land some years ago, and one day our tour bus drove through the modern city of Jericho. At one point during our drive, our tour guide announced that we were passing the ancient site of Jericho. But before I had enough time to pull out my camera, we were gone and left the ancient “city” far behind.

It was not quite what I had imagined. As a kid, I was accustomed to hear the story of how “Joshua fit the battle of Jericho,” and destroyed the “city.” Now, when I think of “city,” I think of a relatively large population area. My hometown, Williamsburg, Virginia, is fairly small by the standard of most cities today, about 9.1 square miles in size, or just a little under 6,000 acres. Contrast that with ancient Jericho, which is approximately only 6 acres in size.

That’s about less than half the size of my small neighborhood.

Wow…. If ancient Jericho was really a “city,” then it must have been a really, itsy-bitsy small one. I suppose the people in such a really small “city” could have been packed in like sardines, but it got me thinking about what the Bible says in Joshua 6 about the “city” of Jericho. What are we to make of this?
END_OF_DOCUMENT_TOKEN_TO_BE_REPLACED