How Does the Gospel of Mark Really End?

Yesterday’s Easter sermon covered the last few verses in the Gospel of Mark…. or did it?

If you pick up any copy of any modern English Bible translation, Mark 16 starts off telling the reader that the women came to the tomb, where Jesus was laid after the crucifixion, early on Sunday morning, only to find that the stone at the entrance of the tomb had been rolled away, and a “young man” (an angel perhaps?) sought to answer the questions that the women had in their minds at that moment:

‘And he said to them, “Do not be alarmed. You seek Jesus of Nazareth, who was crucified. He has risen; he is not here. See the place where they laid him. But go, tell his disciples and Peter that he is going before you to Galilee. There you will see him, just as he told you.” And they went out and fled from the tomb, for trembling and astonishment had seized them, and they said nothing to anyone, for they were afraid’ (Mark 16:6-8 ESV).

It is a very awkward ending to the Gospel. This unknown figure announces that Jesus has been risen from the dead, but there are no resurrection appearances of Jesus to the women. That is really odd, but that is what you have here. 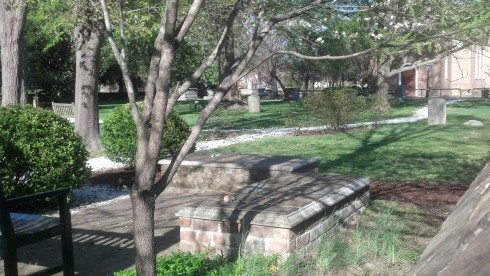 The graveyard at Bruton Parish Church, in Williamsburg, Virginia. What if you were among the women to visit the grave of Jesus, and Jesus was not there, but someone told you that Jesus had been raised from the dead?

However, what is interesting is that most every modern Bible translation will then include a note. The English Standard Version (ESV) modestly reads, “Some of the earliest manuscripts do not include 16:9–20.”  The New International Version (NIV) is bolder and more direct, “The earliest manuscripts and some other ancient witnesses do not have verses 9–20.”

Most of these modern translations will then have a footnote describing what is called the “shorter ending of Mark.” They will often include, in the main body of the text, what is called the “longer ending of Mark.” The most interesting feature of the “longer ending of Mark” is that it includes the infamous snake-handling verse (Mark 16:18), that some Christian groups in Appalachia use as a prooftext for handling live snakes in their worship services (Link to creepy National Geographic story on snake handling).

So, what is the story with these alternative endings for Mark?

Many Christians familiar with the King James Version (KJV) of the Bible will notice that there is no note at the end of verse 8, but that verses 9-16 are included anyway (the longer ending of Mark).  Many therefore conclude (understandably) that the longer ending is the authentic ending for the Gospel of Mark.

However, most scholars (Christian and non-Christian) do not believe that the “longer ending” (or even the “shorter ending”) of Mark are authentic. But scholars differ as to why most of our earliest sources lack anything after verse 8. Perhaps Mark just left the Gospel as a cliff-hanger at the end. Perhaps the original ending to Mark’s Gospel simply got lost, as though the last few inches of Mark’s papyrus got ripped off. A handful of scholars even suggest that some type of oral tradition gives us the alternative endings to Mark that are found after verse 8. Others say that it just seemed too awkward for Mark to end the Gospel at verse 8, so other endings were invented to smooth out the ending of the story.

The bottom line is that we simply do not know how to account for Mark’s abrupt ending at verse 8. Aside from the snake-handling verse, which is perhaps an allusion to Paul being bitten by a snake on the island of Malta, and surviving (Acts 28:1-7), (and the related bit about drinking poison), there is nothing in verse 9-16 that is not repeated or covered elsewhere in the New Testament. No theological problems here. So, we do not lose any specific Christian doctrine if we recognize verses 9-16 as not being authentic.

But it does make for some interesting conversation!!

For a “shorter” summary of the broad scholarly consensus on Mark 16:9-20, you might want to briefly look at the 2 1/2 minute video below from a recent Mike Licona debate. For a “longer” summary, you can consider Mike Winger’s 2-hour video teaching on the topic. Mike Winger is one of most popular Christian Bible teachers / apologists today on YouTube, with over 400,000 followers. As a church pastor, with a YouTube channel on the side, Mike Winger says he spent 150 hours researching this topic. Did you ever think it was possible to spend 150 hours studying the final 12 verses of the longer end of Mark?

Clarke Morledge -- Computer Network Engineer, College of William and Mary... I hiked the Mount of the Holy Cross, one of the famous Colorado Fourteeners, with some friends in July, 2012. My buddy, Mike Scott, snapped this photo of me on the summit. END_OF_DOCUMENT_TOKEN_TO_BE_REPLACED
This entry was posted on Monday, April 18th, 2022 at 6:30 pm and tagged with Easter, Gospel of Mark, longer end of mark, longer ending of mark, Mike Licona, Mike Winger, Resurrection, textual criticism and posted in Apologetics, The Gospels. You can follow any responses to this entry through the RSS 2.0 feed.
« Zombie Apocalypse on Good Friday?
Why I Trust the Bible: Bible Translator Bill Mounce Answers Real Questions and Doubts »