While we are talking about conspiracy theories….

Some of the buzz this past month in social media is about the docu-series by Netflix, The Family. The Family purports to tell the story of Doug Coe, who died a couple of years ago. He was the leader of a pretty amorphous group that has sponsored the National Prayer Breakfast, for decades, attended by Presidents, Congressmen, and other world leaders.

The whole objective? According to “The Family,” otherwise known as the “Fellowship Foundation,” they are about introducing “the person and principles of Jesus, which are at the core of our mission and message,” to men and women in the halls of political power, bridging the divides that separate and alienate people.

But apparently the writers behind the Netflix production see something more sinister at work. A review of the docu-series, at Vermont Public Radio, contends that “a secretive group has been grooming young, Christian men for leadership positions in American politics for decades, all the while ingratiating itself with presidents and congressmembers of both parties — and sidling up to some dictators around the world.”

I met Doug Coe’s son, Jonathan, while I was in college, just a year or two before Jonathan died of cancer. His enthusiasm for knowing Jesus was infectious, and he and some other friends encouraged me, and some of my other college buddies, to see what they were doing in Northern Virginia.

I had nearly zero interest in politics, and in the post-Watergate era, I disliked politicians generally. But in such a divided world, where it seemed like Republicans and Democrats were at one another’s throats all of the time, in the midst of international tensions surrounding the waning years of the Cold War, perhaps some time in Washington D.C. would give me a more positive view of how Christian faith might make a difference for good, in the public sphere.

I lived at Ivanwald, a house where young Christian men live in Arlington, run by “The Family,” for about a month after college. There I attended Bible study meetings, washed dishes, pruned some shrubbery at another home that serves as an informal retreat center, and got to meet a few Congressmen. Some were Republicans. Some were Democrats. I actually was privileged to pray with them. It was encouraging to see how these political figures, who could be so acrimonious in public, were also able to find common ground in private, by discussing the leadership principles of Jesus Christ.

Quite a few of these Congressmen seemed quite sincere in their faith. Some others, I were not entirely sure about. And one or two of my fellow Ivanwald housemates knew very little about the Bible, spouting some ideas that lacked theological depth and cohesion. But the odd apples were rare. Most everyone else was great to be around.

It was all very low-key. I also played lots of volleyball. After my few weeks there, I started my new job after college, and said goodbye to many of those new friends. I have kept up with several of them, on and off over the years, drifting away somewhat as we all got involved with our families, other friends, and jobs, among other things.

Wow. I never would have thought that I had been part of some “secretive group,” doing something so insidious as praying together and playing volleyball.

Jeff Lucas, a Christian reviewer of the film, put it this way at Premier Christianity magazine, over in the U.K., and he expresses the problem with the film exactly:

So how do you attack a group for showing love and support? First of all, cue spooky music throughout the docudrama, a cheap stunt. Put a frightening stanza as a background to shots of Julie Andrews running up a hill declaring that those hills are alive, and you can easily give the impression that that singing nun might be a serial killer and a member of the illuminati. The haunting chords create a conspiratorial atmosphere, which colours everything that is said.

But then in this series, not much is said. The notion seems to be that all influence is conspiratorial, and collaboration is criminal, a laughable notion not only in DC, but in any political arena, which is all about impact and partnership. And in this gospel according to Netflix, Christian influence is especially evil.

I shake my head in disbelief. It really makes me wonder. Why even bother to put the money into making a film series like this, supposedly “exposing” how political leaders, across political divides, come together around events like the National Prayer Breakfast?

Journalist Jeff Sharlet, who wrote the two books that served as the basis for the film series, also lived at Ivanwald, though I never overlapped with him. I am not sure what really got him there to Ivanwald in the first place, and what made him so ultimately hostile to it all, but he sure has a creative imagination.

While some people like conspiracy theories regarding how scientists, government educators and agencies, and museum curators have duped the public for decades regarding science, others like conspiracy theories about spiritually-minded people trying to manipulate Congressmen to think about God more over bacon and eggs, to impose some sort of “theocracy” on an unsuspecting public.

That kind of narrative is really ridiculous.

Alas, with every conspiracy theory there is a grain of truth to it. As any Christian can tell you, sharing your faith with another person involves some risk. You never know absolutely or completely if that person you are befriending might betray your trust, and use you for ulterior motives. Those involved with “The Family” have sought to reach out to some rather unsavory characters, just as Jesus sought to do with tax collectors and prostitutes. Furthermore, some drawn into those outreach efforts have had their faith built on shaky ground.

Some political elites can be really nasty people. Even spiritual sounding ones. As a result, Christians can be easily manipulated themselves by those who are solely motivated by the thirst and intoxicating lure of power. Christians are not immune from such temptation. As Sophie Gilbert writes in this mixed review for The Atlantic, there are people in the halls of political power who have exposed some in “The Family” to the darkest side of the political world.

NEWSFLASH: Political elites can cheat on their spouses, look for inappropriate favors, etc., just as easily as your unsuspected neighbor who hates politics can, too. Betrayal hurts people, no matter where it is.

If there is anything of value in the Netflix feature, it will hopefully serve as a wake-up call to Christians, to remind us of the seductive nature of power, particularly political power, that we might proceed with extreme caution when dealing with matters of state. In that sense, Jeff Sharlet has a valid point. The low-key nature of “The Family” has made it difficult to instill the most proper level of accountability, in those outreach efforts.

Yet what worries Jeff Sharlet, and his cohorts behind the Netflix production, is the fear that Christians have been working secretly behind the scenes to pull the levers of power, as a way of subverting American democracy. In other words, there is a conspiracy afoot, and concerned Americans need to put a stop to this. The silliest thing about this narrative is that it completely ignores the evidence, that trying to get a bunch of diversely-minded Christians together, to conspire much of anything is really difficult to do.

Surely, some viewing The Family will view all Christians with the deepest suspicion, fully consistent with conspiracy theory thinking. Likewise however, many people of various outlooks and perspectives will continue to look upon any and everyone in the political realm (and one another) with similar fear and mistrust, regardless of how spiritual faith plays into the mix.

So while The Family rightly observes how Christians can get their spiritual interests over-entangled, into the affairs of state, the whole conspiratorial flavor of the film merely reinforces they type of mistrust that continues to divide Americans from one another. The Family missed an opportunity to effectively engage in substantive issues of church-state relations, to create room for having conversations that matter, in a truly pluralistic society. Instead, it leaves the viewer anxious to demonize their ‘religious” neighbor, and shut down conversations.

This is all terribly sad.

Would it ever be possible to find a way to break down the barriers of mistrust that divides us all from one another? Is there anyone able to bridge those gaps that separate us?

Perhaps there is someone who has already done that.

I can think of one.

His name is Jesus.

The Apostle Paul was scrawny, hard on the eyes, not a good speaker, and constantly paid the price for his style and message.  He had lots of scars and baggage.  He made mistakes.  He considered himself, “…less than the least of all God’s people .”  And yet he was one of the most influential people who ever lived.  Two thousand years after his death, his letters are among the most reproduced documents in the history of mankind.

In 2 Corinthians 10 Paul responded to attacks against his ministry and his person.  He acknowledged that he was “timid when face to face” (v. 1),  and  that people were saying, “His letters are weighty and forceful, but in person he is unimpressive and his speaking amounts to nothing” (v. 10).

It occurred to me this week, while thinking about Paul, that I had seen and heard someone who fit the description of being a less-than-impressive speaker, but having a powerful message that touched mankind.  Her name was Agnes Gonxha Bojaxhiu, and she was often called ‘diminutive’.  And like Paul she had detractors.  But she had the courage of her convictions and she was able to demonstrate the mercy and love of Jesus Christ in incredible ways.  And for that she was memorable.

In 1994 she gave a speech at the National Prayer Breakfast, attended by President Bill Clinton and a room full of dignitaries.  I remember that I could barely see her head above the podium, could barely make out what she was saying above the acoustics in the room, and that nevertheless she received a standing ovation.  It’s difficult to watch her speech (below) in some respects because she was not an impressive speaker.  But don’t miss the last minute when she stepped down from the podium.

So what did she say?  Here’s the impressive part—her transcript.  Many parts of her message confronted the views of the powerful people in the room, but she delivered it passionately anyway, to please an audience of one.  She had lived through unspeakable suffering to develop her message.  It’s the living Gospel ,with mandates and complete conviction.  Mother Teresa really walked the walk.  And she had a lot in common with the Apostle Paul.

Here’s a photograph of two renowned women—one was a beautiful lady who brought peace and joy to millions of people, and the other was a princess. 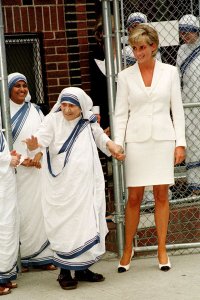