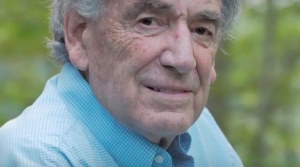 I want to tell you a little bit about one of the most influential, Spirit-led men, that most people will never know. Doug Coe, a leader behind the annual National Prayer Breakfast, and mentor to countless national and world leaders, for the sake of Jesus Christ, died on February 21, 2017.

Doug Coe’s ministry was simple: to help point people towards Jesus. His strategy was simple: to meet with people one-on-one and in small groups, to point people towards Jesus. What made Doug Coe unique was that he did this very quietly, with politicians and other leaders-and-shakers, for over 50 years, in the halls of Congress and the White House, in Washington, D.C. In 2005, TIME magazine labeled Doug Coe as one of the 25 most influential evangelical leaders in America, as the “Stealth Persuader.”

The TIME article needlessly overreaches in describing Doug Coe. But there have been a number of Christians who have had their suspicions, too. The cynicism is to be expected, but in the high-pressure, high-stakes, high-visibility political world of Washington, D.C., Doug Coe was a man that Congressmen and Presidents could simply trust, a man who gently pointed some of the most powerful people on the planet to take small, yet ultimately significant, steps towards Jesus.

No political boundary was too wide to prevent Doug Coe from sharing his message. Hilary Clinton often attended a weekly prayer meeting on Capital Hill, led by Doug Coe, when she was a Senator. Doug Coe brought together the warring leaders of Congo and Rwanda, after building years of friendships with other African leaders. Two years later, Congo and Rwanda, signed a peace treaty. To this day, the National Prayer Breakfast, that Coe helped to run through a movement called the “Fellowship Foundation,” brings together leaders from all over the world to consider the teachings and person of Jesus, connecting these leaders with the inner-city poor and disenfranchised, through service activities.

I had the privilege of meeting Doug Coe in the late 1980s, not too long after I became friends with one of his sons, Jonathan, who helped some of my friends at my college build an off-campus Christian community. Doug Coe avoided public attention, keeping a very low profile, with the Fellowship Foundation, networking people together in quiet ways.

Running a ministry like this, beneath the radar, creates a safe environment for leaders under the scrutiny of the press, and it has led to extraordinary, wonderful spiritual transformations, for which the public is mostly unaware.

However, on a few isolated occasions, the low profile of the ministry that Doug Coe gently facilitated, has had its disadvantages, too. Sadly, when a relative handful of participants  in these small, quiet networks have veered off the “straight and and narrow,” either morally or doctrinally, the Fellowship Foundation really has had no effective means to discipline their “black sheep,”to get them back on the right path. But that probably is the price you pay when working with people with names like Eisenhower, Kennedy, Johnson, Nixon, Ford, Carter, Reagan, Bush, Clinton and Obama. While I am confident that Doug Coe stayed above the fray, the lure of corruption and hubris for those who intermingle with the rich and powerful is a difficult drug to lay aside.

Aside from those who have met him, very few will soon remember the soft-spoken Doug Coe, but he would rather it be that way. In his obituary, Doug Coe was quoted as saying, “I am called simply to be an inclusive ambassador of Jesus Christ’s love. Early on I thought the work of God was evangelism, but I soon realized the only person I could evangelize or disciple was myself. I learned from Billy Graham that the Gospel isn’t three or five points; it’s a Person – Jesus. God is love, and since Jesus is God, then the Gospel is also love.”

Clarke Morledge -- Computer Network Engineer, College of William and Mary... I hiked the Mount of the Holy Cross, one of the famous Colorado Fourteeners, with some friends in July, 2012. My buddy, Mike Scott, snapped this photo of me on the summit. END_OF_DOCUMENT_TOKEN_TO_BE_REPLACED
This entry was posted on Thursday, March 2nd, 2017 at 10:19 pm and tagged with doug coe and posted in Witnesses. You can follow any responses to this entry through the RSS 2.0 feed.
« When the New Testament Writers Quote the Old Testament, … Uh… Are They Crazy?
Should Christians Go See The Shack, the Movie? »