Can We Trust the Bible?

“The Bible says it, I believe it, that settles it.”  Really?!

Here’s a slightly irreverent, very funny, and spot-on lecture by Dr. Wallace given at Dallas Theological Seminary about the “worst Christian slogan ever concocted” (my apologies in advance to people from Arkansas).

Seriously, how much research is there to corroborate Dr. Wallace’s observations and conclusions?  How reliable are the Bibles we have today?

It turns out Dr. Wallace has serious credentials, having conducted exhaustive research in the field of textual criticism.  He founded the Center for the Study of New Testament Manuscripts, highlighted in this earlier post.  Their work was also documented in the first two parts of a three-part series by the Day of Discovery folks.  These videos make an overwhelming case for the reliability and value of the Scriptures (not just the accuracy of the manuscripts).

There are skeptics who will attack the Bible over textual variants.  Take a few minutes to watch these videos, and become acquainted with intelligent, overwhelming, objective research that is easy to understand and easy to use when answering cynics.  As Dr. Wallace notes in his lecture above, it is incumbent upon Christians to enlighten those who dispute the facts, often without considering the evidence—not unlike those who would revert to the cliché at the beginning of this post. 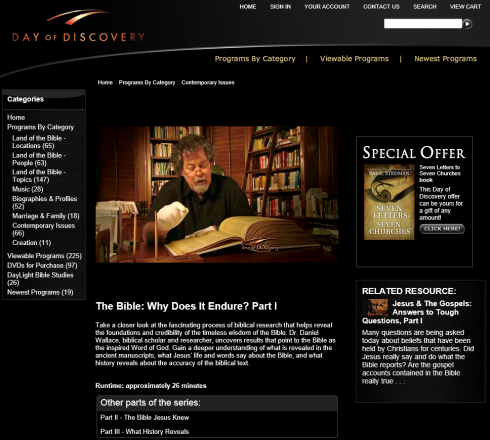 This blog is topical and devotional--we post whatever interests us, whenever. If you want to follow in an orderly fashion, please see our Kaqexeß page. END_OF_DOCUMENT_TOKEN_TO_BE_REPLACED
This entry was posted on Saturday, October 27th, 2012 at 7:09 pm and tagged with Bible study, Christianity, Daniel Wallace, new testament manuscripts, theology, veracity and posted in Apologetics, Topics. You can follow any responses to this entry through the RSS 2.0 feed.
« Parsing Greek
Veracity’s Top 10 Scorers »

5 responses to “Can We Trust the Bible?”