“Theistic Evolution:” Was Everything Perfectly Good Before the Fall? 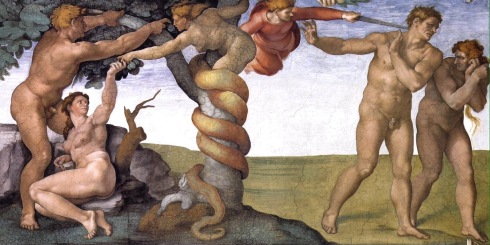 Micheangelo’s depiction of the Fall of Humanity, in the Sistine Chapel. Did evil enter the world, when Adam and Eve sinned, or did evil sneak its way into the world prior to the Fall?

A new 2017 book released by Crossway publishers, Theistic Evolution: A Scientific, Philosophical, and Theological Critique, is an array of essays meant to discourage Christians from embracing so-called “theistic evolution.” But what exactly is “theistic evolution?”

I have never been happy with the term, as it leaves the question of, “who is this particular God?,” up in the air. Is the theos in “theistic” referring to the God of the Bible, or some other divine concept? A lot of people believe in “God,” but that does not mean that they embrace the God as revealed in Jesus Christ.

Instead of “theistic evolution,” the name “evolutionary creationism,” embraced by the folks at Biologos.org, an organization started by Francis Collins, one of the scientists behind the Human Genome Project, is a specifically Christian description, as it grounds the concept of evolution within a biblical concept of creation. But is evolution really compatible with the Bible’s teaching on creation? Do the authors of this new book succeed in promoting its thesis, in dismantling “theistic evolution“? Or to put it another way, in the authors’ efforts to take down materialistic evolutionary philosophy, and its influence on evangelical Christianity, have they set up a straw man?

Theistic Evolution: A Scientific, Philosophical, and Theological Critique contends that the prevailing biological theory of evolution should not be accepted whole-heartedly by Christians, as it works to undermine certain traditional biblical ideas about creation. It is a challenging argument, that the thoughtful Christian, engaging with scientifically-informed skeptics, must wrestle with.

Presumably the authors all hold to an Old-Earth Creationist viewpoint, one that accepts the well-attested antiquity of the earth, while denying macro-evolution. Young Earth Creationists, to the contrary, believe the earth to be less than 10,000 years old. But according to reviews I have surveyed, nowhere does the 1,000-plus page book actually take a stand on the age of the earth.

ReasonsToBelieve president, Hugh Ross, has written a thoughtful (partial) review of the book. Ross, an Old Earth Creationist himself, broadly accepts the book’s thesis, but he also points out some weaknesses. For example, at least one essay proposes that the natural order of the world only became corrupted after the Fall of Adam and Eve in the garden. It is true that God was originally pleased with what he created, declaring it to be all “good.” But does that tell the whole story of what we read in Genesis 1-3? The text also gives some indication that all was not completely hunky-dory by the time Adam and Eve first arrive on the scene.

What does one make of the presence of a crafty serpent in the garden? (Genesis 3:1) If all was created “good,” how did such a deceptive creature make its way into God’s “good” world? Furthermore, did not God command the first humans to “fill the earth and subdue it?” (Genesis 1:28) Why would God insist that the earth be subdued, or domesticated, if there was not some form of elusive chaos permeating God’s good world, that needed to brought under the Creator’s control?

These observations within the biblical text do not necessarily take away from the goodness of creation. Nevertheless, they are there in the text. If we take biblical inspiration seriously, we must still account for all of what the text says. As I understand the term “Evolutionary Creationism,” those who advocate for it are trying to grapple with these biblical observations.

“It seems to me, therefore, a reasonable supposition, that some mighty created power had already been at work for ill on the material universe, or the solar system, or at least, planet Earth, before ever man came on the scene; and that when man fell, someone had, indeed, tempted him.”

The authors of Theistic Evolution go to great lengths to say that “Neo-Darwinism” subverts the Scriptural witness, and there is much to commend this view. But do these criticisms fairly apply to “Evolutionary Creationism?” If I understand Lewis correctly, then it would appear that at least some of the authors of Theistic Evolution may have chosen to ignore the above uncomfortable, Scriptural observations.

As evidenced by the recent furor over Pope Francis’ critique of the traditional translation of the Lord’s Prayer, God’s role in temptation, is indeed a difficult biblical topic. However,the Book of James teaches that God could not have tempted Adam and Eve to sin, so it must have been some force of evil, present in the world prior to the Fall:

“Let no one say when he is tempted, “I am being tempted by God,” for God cannot be tempted with evil, and he himself tempts no one.” (James 1:13 ESV)

Furthermore, the Apostle Paul in the Book of Romans tells us:

“For the creation waits with eager longing for the revealing of the sons of God.” (Romans 8:19 ESV)

But when did this agonizing wait from creation start? Was it after humanity’s fall or prior to the fall?

I do not necessarily agree with all of Hugh Ross’ critique, but I think his review is very much worth reading. If someone has read Theistic Evolution: A Scientific, Philosophical, and Theological Critique, please leave your thoughts in the comments section below, as I would like to know what you think.  Here is the trailer for the book.

Clarke Morledge -- Computer Network Engineer, College of William and Mary... I hiked the Mount of the Holy Cross, one of the famous Colorado Fourteeners, with some friends in July, 2012. My buddy, Mike Scott, snapped this photo of me on the summit. END_OF_DOCUMENT_TOKEN_TO_BE_REPLACED
This entry was posted on Tuesday, December 26th, 2017 at 6:00 pm and tagged with creation, Creationism, Evolutionary Creationism, intelligent design, Old-Earth Creationism and posted in Topics. You can follow any responses to this entry through the RSS 2.0 feed.
« Mission for Rohingya
2017 Year in Review »

One response to ““Theistic Evolution:” Was Everything Perfectly Good Before the Fall?”