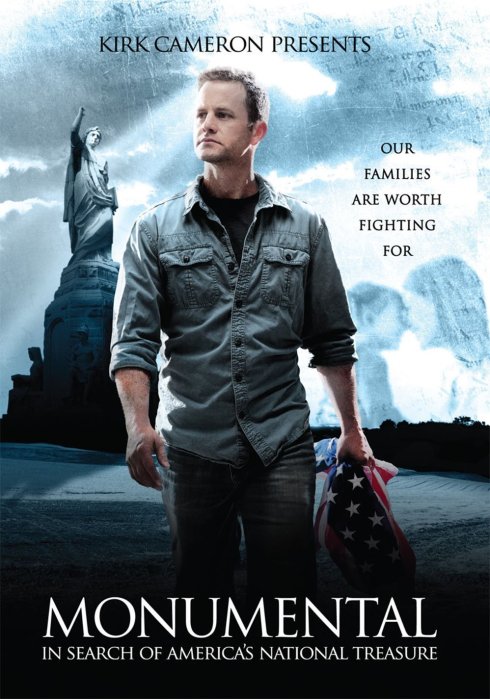 Kirk Cameron’s 2012 film, Monumental, is worth seeing, but only if accompanied by good, historical scholarship to correct the inaccuracies and misguided theology.

I love history. I love it because history tells us who we are. The study of history tells us about where we have come from as individuals and as societies, and it helps to tell us where we are going. We ignore the lessons of history at our peril, as George Santayana said, “Those who cannot remember the past are condemned to repeat it.” Sadly, we live in an age where we suffer as a culture, and particularly as a Christian church, from chronic amnesia. We risk fulfilling the prophecy of Santayana with such terrifying disinterest and apathy.

The story of the Christian faith is rooted in history. The life, death and resurrection of Jesus, as well as the narrative of ancient Israel, are events that exist within space and time. As believers, we are under obligation to get the story right. So, it bothers me when those of us as Christians, who should care the most about history, tend to misrepresent that history, fudging on the story at certain points to advance misguided theological agendas. Even if we deem the motives to be well-intended, we do no favors to the church and the surrounding world with unsubstantiated alterations that distort the telling of that history.

This explains the frustration I felt when I recently viewed Kirk Cameron’s 2012 documentary, Monumental. I was indeed entertained by watching Monumental, but I am not so sure if I was equally educated. As a work of amateur historiography, Monumental is worthy of consideration and a thoughtful discussion starter. But as a serious documentary of responsible scholarship, Monumental falls short. It made me want to plead with Kirk Cameron, the famous actor turned film producer, “can I call for a do-over?” I know that I am just a few years “late to the party,” but please allow me to explain.

A Missed Opportunity to Get History Right: Can We Try This One Again?

On the positive side, Monumental does offer a perspective that goes largely unheard of in the popular, secular media. As he interviews a wide array of scholars and other history buffs, Cameron tells the story of the Pilgrims, those Reformed “Separatists” who found the Church of England in the early 17th century to be a caricature of the true church of Jesus Christ. Against all odds and suffering all kinds of innumerable setbacks, these Pilgrims eventually made their way to Massachusetts Bay to start something new, one of the earliest movements that eventually led to the founding of the United States of America. In many ways, Kirk Cameron tells the story rather well, and I did learn a few things, for which I am grateful. Cameron’s desire to get to the “real” story reminds us that we should not uncritically accept the popular picture of our history, what little there is these days. I respect him for that and applaud his efforts.

In many ways, I share much of Cameron’s same concerns: Can history tell us about the future of America, and Christianity’s role within that future? You are bound to find dozens of reviews from non-Christian sources that will pan the movie. The vitriol and contempt expressed in many such sentiments is something that I believe is uncalled for, as a fellow follower of Jesus. This type of opposition is to be expected by Cameron’s rather forward attempt to get a different message out there. Nevertheless, as a Christian, I must also implore Kirk Cameron that he could have done better.

But to be fair, let us start where Cameron got things right. In the first six minutes of the movie, Cameron begins with a certain critique aimed at the secular left, as well as the Christian dispensationalist right, a message he develops throughout the whole movie.

Yes, there are those among our neighbors who wrongly think that Christianity has only been an insignificant, or even detrimental, part of our American heritage, over the past four hundred years. Overly simplistic, such uninformed judgments reduce Christianity in American history to a form of oppression of native peoples, or other barriers to genuine, true democracy. Likewise, there are many within the church who view the decline of Christian values in our postmodern era as only signs that foretell the “End Times,” and therefore, we should embrace such conditions as a part of God’s purposeful will, with no need to try to change things.

So, it was clear that Kirk Cameron was not merely giving us an analysis of history from the perspective of those who lived it. He was primarily concerned with how such lessons can be applied to Christians living in America today. I was now ready for what would follow.

But soon the trouble began. I nearly laughed out loud at about the 5:13 mark in the program. Cameron tells us that because of the Pilgrim Separatists’ view about the state-sponsored church in the early 17th century, they could be “drawn and cornered” for speaking out against the King of England, James I, who ironically sought to pacify the discontent of his evangelical Puritan subjects with the commissioning of the King James Version of the Bible.

Let us check those English subtitles on the DVD again…

I think brother Kirk meant to say “drawn and quartered,” a horribly bloody form of punishment whereby those convicted of treason would have their limbs pulled apart by horse cart and then have their bodies cut in four pieces.

Who did Kirk Cameron have to fact-check his script? Was he not able to have a scholarly advisor as an editor to catch such errors? Clearly, within those first few minutes, I was painfully made aware that Cameron is just as much of an amateur historian as frankly I am. But why would he release a film with such an obvious gaffe only six minutes into the movie? What other zingers were there waiting for me?

To his credit, Kirk Cameron did interview some reputable scholars, such as one of my favorites, Os Guinness, but the selection of scholars and material chosen from them was uneven. As the film continued on, there were other moments where Cameron himself, or some of the historian “experts” he consulted, made various overstatements, distortions, or dubious claims throughout the film. I kept thinking that there must be some website out there where I could myself go to “fact check” the material presented in Monumental.

Thankfully, Grove City College professor, Warren Throckmorton, has reported on the most egregious errors, and this just from some of the YouTube clips promoting the film before the official release date a few years ago. Throckmorton is a blogger and author who has been trying to help Christians be more informed when popular amatuer historiography gets things wrong.

For example, it is misleading to suggest that the Founding Fathers put up the money to fund the printing and distribution of Bibles, so that as many Americans as possible could have the “Word of God” in their hands. Perhaps, we wish were that it was so, but such wishful thinking does not line up with the historical facts. Led by one such controversial “historian,” Cameron took otherwise interesting stories and fashioned them for purposes alien to the original context, such as this story about the Aitken Bible.

Brother Kirk, you REALLY could have done this better.

Kirk Cameron spent most of his time talking with Marshall Foster, the director of the World History Institute. Marshall Foster is indeed a fascinating speaker, a popular home-schooling educator, and very well read, from what I can tell. I briefly met him about eight years ago, and I can honestly say that I like him. But to my knowledge, Foster has no advanced degree in history. In fact, Cameron managed to avoid talking with ANY doctorally-trained, evangelical Christian historian. Where were the interviews with Mark Noll or George Marsden, some of the finest living historians today AND passionate evangelical Christians? Instead, Cameron preferred to speak with congressmen.

Some may say that my criticisms of the film are nit-picky. And yes, it is mind-boggling to me that Cameron completely missed the story about Jamestown, which is only a few miles away from where I live here in Virginia, so you could easily dismiss my review as disgruntled murmuring.

But you must understand. I REALLY wanted to like this film. Christians SHOULD be engaged in good history telling, and there was just enough of it to make it worth blogging about. The visual quality of the film was well done and the musical soundtrack was engaging. What a great opportunity to get folks excited about history! But even if he got 80% of the film historically right (AT BEST!!!), there is still that 20% of embarrassing errors, that it makes wonder how much of this can you really trust? There were just so many cringe-worthy moments in Monumental that this particular amateur historian wanted to yell out, “Kirk Cameron! Can you do the film over again, and this time get the story right?!”

On second thought, it could be that Cameron’s problem is deeper than the film’s occasional, historical “accuracy” missteps. As Wheaton College professor of history, Robert Tracey McKenzie, says, the fundamental problem with Kirk Cameron’s film is in how he approaches the study of history. McKenzie writes as a fellow evangelical Christian, who likewise shares many of the same concerns that Kirk Cameron has about the state of Christianity within America. However, McKenzie observes that Cameron somehow draws a link between biblical Israel and the United States, as though America is a type of fulfillment of biblical prophecy, whereby America “replaces” Israel in the economy of God. I would encourage anyone who has seen Monumental, or who plans to see it, to read McKenzie’s blog posts of the film for a much needed alternative and necessarily Christian perspective (Read them in order here: #1, #2, and #3, or get the whole series that McKenzie has written about the film, or just read his book The First Thanksgiving, highlighted here on Veracity a few years ago).

It is one thing to be patriotic about our country and be forever grateful for the freedoms that all Americans share. But it is quite another thing as a Christian to somehow draw an analogy between the purposes of God through ancient Israel and the purposes of God through modern America. We are on dangerously thin ice theologically when we view the American nation in a way that borders on idolatry. This is “replacement theology” at its worst.

Can Christians learn something from our Pilgrim forefathers? Absolutely. Can someone who views Kirk Cameron’s Monumental learn something about history? Yes, I “monumentally” hope so. But you really need to arm yourself also with a healthy dose of responsible scholarship to supplement the well-intentioned, though sometimes faulty efforts, of amateur historians like Kirk Cameron.

Clarke Morledge -- Computer Network Engineer, College of William and Mary... I hiked the Mount of the Holy Cross, one of the famous Colorado Fourteeners, with some friends in July, 2012. My buddy, Mike Scott, snapped this photo of me on the summit. END_OF_DOCUMENT_TOKEN_TO_BE_REPLACED
This entry was posted on Monday, January 18th, 2016 at 11:27 am and tagged with Church History, david barton, kirk cameron, monumental and posted in Apologetics. You can follow any responses to this entry through the RSS 2.0 feed.
« Deep Dive Into Romans: Why Saul Became Paul
The Righteous Shall Live By Faith »