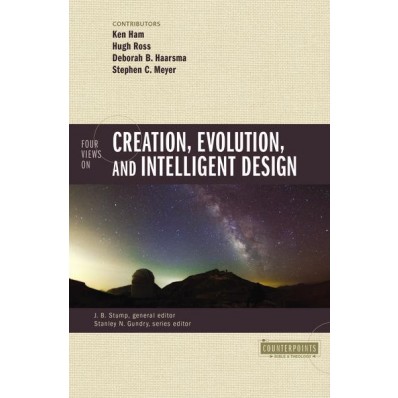 If I had to pick one book that concisely gives an overview of the controversy over human origins, Four Views on Creation, Evolution, and Intelligent Design would be it. Part of Zondervan’s Counterpoint series, this book manages to pull together four of the leading Christian thinkers, about science and faith issues, to have them dialogue with one another in a spirit of charity and mutual respect (…for the most part).

There is simply no other book resource available today that gathers these differing points of view together in one volume, on this difficult topic. That, in and of itself, is a major accomplishment. A verse in Proverbs makes the point: The first to state his case seems right, until another comes and cross-examines him (Proverbs 18:17 CSB). Sadly, many Christians only hear one point of view, failing to consider other perspectives, leading to mistrust of other believers who might see things somewhat differently.

This is not to say all points of view are correct. They are not. There is but one truth. But it is difficult to properly uphold the truth, if you have not taken the time to consider other biblically responsible options. Proverbs suggests that we should hear one another out before making a firm judgment. END_OF_DOCUMENT_TOKEN_TO_BE_REPLACED

Exactly three years ago today, the arguably most recognizable popular advocate for modern science, Bill Nye, debated one of the most controversial leaders in evangelical Christianity, Ken Ham, of Answers and Genesis, on the topic of creation. Since then, this debate has received nearly 6 million views on YouTube, which is a lot for a two-hour debate on science and the Bible.

This past year, Bill Nye returned to Kentucky to take a tour of the new Ark Encounter exhibit, just days after its opening. Cameras were rolling as Answers in Genesis recorded the casual, yet often heated, discussion between these two iconic men. Bill Nye and Ken Ham represent two very opposite ends of the pole on this topic, so I frankly found the discussion rather frustrating and exasperating. It felt like the two sides were just talking past one another. Nevertheless, it gives a good example of the type of challenges Christians face when defending their faith, with skeptics who are enamored by the prospects of modern science.

UPDATE: April 2018.  I originally posted a 2o-minute edited version of the discussion, which has since been taken down. Here is the full 2-hour version, from Answers in Genesis:

Racism, Police Authority, and the Misinterpretation of the Bible 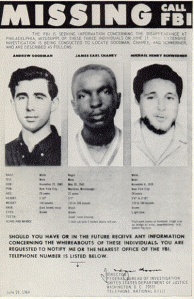 America is caught in the middle of racial conflict, as tensions between law enforcement and African American communities have erupted in violence. However, the problem has deep roots in history. An understanding of these roots will go a long way towards healing and reconciliation. Some of these roots go back to misinterpretation of the Bible.

In June, 2016, the Mississippi attorney general officially closed a 52-year old case involving the murders of three civil rights workers, in the summer of 1964. Members of the Ku Klux Klan in Neshoba County had killed two white men and one African American who had traveled to Mississippi to help segregated African Americans register to vote. The Klansmen feared that the efforts of these three men would lead to the “mixing of the races,” so they sought to teach the civil rights workers “a lesson.”

The Klansmen were aided by one of their number, a local deputy sheriff, Cecil Price, who arranged for the abduction of the three men after a supposed traffic stop and afternoon in jail. The three were taken to an earthen dam, where they were shot and buried, one of them still breathing as the bulldozer shoveled the dirt over them.

Deputy Cecil Price was never convicted of murder, but he was tried and sentenced to six years in prison on civil rights violations, in 1967. The ringleader of the Klan group, Edgar Ray Killen, was finally convicted of manslaughter and put in jail thirty-six years later in 2005, as part of this infamous “Mississippi Burning” case.1

Edgar Ray Killen was a part-time Baptist preacher. Killen had been put on trial back in the 1960s, but he escaped conviction back then due to a hung jury. One of the jurors in that early case claimed that they could have never convicted a preacher.

Price was the “law man,” and Killen had the Bible. Thankfully, men like Price and Killen are an exception, and do not represent in any way all law enforcement authorities or Christian preachers. Yet I sincerely doubt that Price would have been able to self-justify his actions if Killen, the preacher, had not somehow signaled that the terrible actions they ended up all taking were somehow, “Okay with God.”

So, what goes through the mind of someone, like “Preacher” Killen, who can justify such brutality, a man who claims to be guided by the Word of God? How can a law enforcement official, like Cecil Price, go along with such actions? Where do people get the idea, that the “mixing of the races” is something contrary to the Bible, to begin with? END_OF_DOCUMENT_TOKEN_TO_BE_REPLACED

Today, Answers in Genesis, will be opening a brand new museum, ArkEncounter, in Williamstown, Kentucky. Ken Ham, the visionary behind the project, believes that the story of the Bible teaches that a global flood cataclysm enveloped the earth less than 6,000 years ago. To drive home this interpretation of the Bible, Ham’s team has built a full-sized replica of the original ark, as a type of educational, Christian-themed amusement park.

Contrary to the quaint, Sunday-School description of cute giraffes sticking their heads out of the top of the ark, the primary message behind Noah and the flood is deadly serious. Humanity is sick with sin and rebellion against a holy and loving God, and apart from the Good News of Jesus Christ, we all deserve to perish underneath the waves of His holy judgment. While those who believe the Bible embrace these truths, not every believer interprets the scientific details of the flood in the same, precise manner as presented by ArkEncounter.

For example, ArkEncounter promotes the interpretation that the great mountains of the world, such as Mount Everest, were a great deal shorter just a few thousand years ago, prior to Noah’s flood. Therefore, God would not have needed five miles high of water to envelope the planet. Nor would have the animals required oxygen at such a great height, aboard the ark. This presupposes that once the great flood began to recede, a rapid series of plate tectonic movements resulted in the creation of mountains, like Everest, even though no such event is clearly described in the Bible, and no scientific evidence of such catastrophic tectonic movements has been found. Other Christians, on the other hand, believe that Noah’s flood was more local in scope to the Mesopotamian area, though sufficient enough to wipeout the then known, “world of the ungodly” (2 Peter 2:5). Such a large scale flooding event, though not global, does find support within current scientific research.

Several years ago, John Paine and I put together a bunch of posts examining the flood from a biblical point of view:

Also, Old Testament scholar Tremper Longman has a few blog posts, at Biologos.org, looking at the question of what is the ancient and proper literary genre of Genesis 6-9, as the key to understanding Noah and the flood. His answer, briefly? The flood story is “neither literal history nor myth.” It is something far more interesting.

Here is a flyover of the ArkEncounter exhibit:

A year ago today, popular children educator Bill Nye and the president of Answers in Genesis, Ken Ham, debated one another at the Creation Museum in Kentucky. Has anything changed within a year?

Bill Nye was recently interviewed by the folks at BioLogos. Two things stand out to me in the interview:

If you accept the black-and-white categories laid out by both Bill Nye and Ken Ham, it leaves very little room for talking about harmonizing the God of the Bible’s Creative activity with contemporary science without compromising either the Biblical authority on the one hand or modern Science on the other. I was not very thrilled with the debate as it just seemed as though the participants kept talking past one another, something that comes out in the Answers In Genesis video linked below.

Has there been more fruitful dialogue to come out of the Nye/Ham debate over the past year? I will let you be the judge, but from where I sit, it does not help the situation when even Christians find themselves unable to see past their own prejudices, confusing making a stand on the Truthfulness of God’s Word with merely being uncharitable towards others with whom they disagree.

But allow me to make a positive illustration: At the National Conference on Christian Apologetics that I attended in October, 2014, with a few Veracity friends, I had the privilege of meeting Dr. Michael Behe, one of the leading lights of the Intelligent Design movement, discussed here earlier on Veracity. I also met Hugh Ross, the president of Reasons to Believe, a favorite here at Veracity. I told both gentlemen that I was a bit bothered that while there were Young Earth, Old Earth, and Intelligent Design people represented at that conference, the Evolutionary Creationist camp represented by BioLogos was conspicuously absent (this is ironic since WORLD magazine soon thereafter made the counter-claim that BioLogos excluded prominent critics from a BioLogos conference … I guess WORLD magazine never covered the National Conference on Christian Apologetics… more *SIGHING*).

What Michael Behe and Hugh Ross said was refreshingly encouraging. While both  disagreed with the view of Darwinism held by the folks at BioLogos, and both nevertheless continue to try to persuade others to their point of view, both men still count a number of their critics at BioLogos as being friends.

Wow. What a novel concept: Embracing fellow believers in Christ as friends, even when you strongly disagree with them on a particular non-salvation issue.

Perhaps if others in the creation/age-of-the-earth/evolution debate within the Body of Christ had that type of attitude with one another, then when you have debates with folks like Bill Nye, it would not seem like you were always talking past the other person.

Thanks, Dr. Behe and Dr. Ross!