Thinking About Ditching Your Copy of The Message? … Consider This 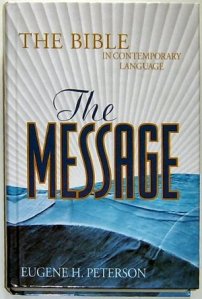 (UPDATE 4:30PM:  PLEASE READ TO VERY END OF THE POST). As some of you probably already know, the veteran Christian author, Eugene Peterson, has apparently changed his views regarding same-sex marriage. Twitter lit up like crazy yesterday, after an interview with Peterson suggested that the author, of great books like, A Long Obedience in the Same Direction, and the popular paraphrase of the Bible, The Message, would perform a same-sex wedding, if he was asked.

Peterson is getting up there in years, and he says he is withdrawing from public life. But with the news yesterday, he joins a growing chorus of evangelical leaders, who have changed their views on same-sex marriage in the church, such as Tony Campolo and HGTV’s Jen Hatmaker. This is disconcerting to those who believe the church is capitulating to pressure from the culture, while others believe that this is a long-due, over-corrective to the church’s mistreatment of gay and lesbian people.

Lifeway Christian Stores is talking about refusing to sell Peterson’s books, while others are suggesting that Christians stop using Peterson’s The Message, in their Bible reading. There are few things to consider here:

A brief look at Peter’s example in Scripture might help. The Apostle Peter was like a lightning rod for the early church, as documented all throughout the Book of Acts. But even though Peter was perhaps the most significant leader in the church, he was not perfect. When Peter started to shun table fellowship with Gentile Christians, the Apostle Paul totally got in his face for his error (Read Galatians 2:11-14). Paul knew that the Gospel was meant for all people, not just the Jews, and persistently challenged Peter upfront. But Paul never discredited the good things Peter had done to promote the Gospel. In the end, Peter eventually changed his mind, and supported Paul’s ministry.

To this day, we are still reading Peter’s two letters (1 and 2 Peter) and the Gospel of Mark, that he collaborated with Mark. If we were to have prematurely written off Peter as being without hope, we would have lost a large chunk of our New Testament! So, there is something to hope for, too, that Eugene Petersen might rethink his position.

For that reason, I plan on keeping my copy of The Message…. but I am still not going to put verse numbers in it!!

Okay, folks. Back away from the bonfire! …. You can put away that gasoline that you were going to pour on your stack of The Message Bibles. ChristianityToday reports this afternoon that Eugene Petersen has retracted his earlier statement regarding same-sex marriage. That was pretty quick, and the whole debacle has some telling lessons on how public statements, issued and heard in sound bites, taken out of context, can cause harm for Christian witness. To the extent, that I said something that misrepresented Eugene Peterson, a man I respect and admire, I sincerely apologize   …… Still, I AM NOT GOING TO PUT VERSE NUMBERS IN MY COPY OF THE MESSAGE, AND YOU SHOULD NOT EITHER!!

As the initial controversy has died down, I will link some helpful posts here, from a variety of perspectives, regarding the Eugene Peterson affair this week, or The Message as a translation/paraphrase. Your feedback is welcome:

Clarke Morledge -- Computer Network Engineer, College of William and Mary... I hiked the Mount of the Holy Cross, one of the famous Colorado Fourteeners, with some friends in July, 2012. My buddy, Mike Scott, snapped this photo of me on the summit. END_OF_DOCUMENT_TOKEN_TO_BE_REPLACED
This entry was posted on Thursday, July 13th, 2017 at 9:05 am and tagged with eugene peterson, kurt eichenwald, same-sex attraction, same-sex marriage, The Message and posted in Topics. You can follow any responses to this entry through the RSS 2.0 feed.
« On Robert E. Lee Statues, the Reformation, and The Danger of Forgetting History
The Book of Zephaniah: In Five Minutes »

2 responses to “Thinking About Ditching Your Copy of The Message? … Consider This”