Does Carbon-14 Radiometric Dating Undermine the Bible (or Confirm It)?

Some Christians are not fans of radiometric dating. They believe that radiometric dating has been used to attack the Bible. These Christians seek to honor God’s Word, so the motives behind the argument against some scientific practices, such as Carbon-14 dating, are well-intentioned. Nevertheless, this approach can be confusing, if not wrongheaded, for the simple reason that Carbon-14 dating actually presents strong evidence for the Christian faith (and not against it).

How can that be? 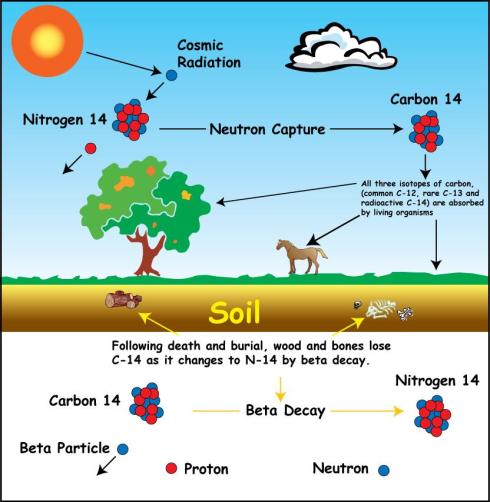 Carbon14 Dating: Friend or Foe to the Christian?? (follow this link to the Australian National University, for the technical details)

Carbon-14 dating is but one of several radiometric dating methods, whereby scientists can determine the ages of things, by examining how quickly certain substances have decayed over time in a sample. Substances, like Carbon-14, will slowly break down, at a rate determined by the radioisotope’s half-life.

Radiometric dating methods, like with Carbon-14, get a bad rap among some Christians, in that the science of radiometric dating is used to suggest that the earth is really, really old… as in millions of years old… which runs contrary to a common view, that the earth is only 6,000 years old. However, it should be clarified that Carbon-14 dating, specifically, can only measure things in terms of thousands of years old, and not millions. But the calibration principle behind Carbon-14 dating, when applied to other substances with a much longer half-life, like potassium, allows scientists to measure dates in the range of millions of years. Therefore, the concern about radiometric dating in principle remains.

But how many Christians know that Carbon-14 dating actually has been used to confirm the Bible? Let me describe a few examples.

In 2003, scientists were able to use Carbon-14 dating to accurately date a tunnel running underneath Jerusalem to redirect the supply of water. According to 2 Kings 20:20, King Hezekiah built a water supply tunnel, when the city was under siege, around the year 700 B.C. The Carbon-14 dating tests, performed on the wood used to make the plaster for the tunnel, gave results that perfectly match the Biblical record.

Now, how cool is that?

Here is another example of the value of Carbon-14 dating: In an amazing discovery in the 20th century, scientists were able to discover the age of the famous Dead Sea Scrolls. The Scrolls are a set of ancient documents, including a large part of the Old Testament, that were recovered from clay jars, preserved for centuries in the caves at Qumran, most probably by a now lost Jewish sect, the Essenes. The Israeli Antiquities Authority concludes that the majority of the Dead Sea documents were written BEFORE the time of Jesus, with only a few scattered documents written, or copied from earlier documents, as late as the 1st or early 2nd century, in the Common Era.

For a seven-minute overview of how carbon radiometric dating works, and how it was used to demonstrate that many of the Dead Sea Scrolls could be dated back to several centuries before Christ, you should view this 7-minute video by Reasons to Believe:

Now, that is pretty cool.

Thanks to Carbon-14 dating, Christians can have increased confidence that the Bible has historical credibility. In other words, Carbon-14 dating provides us yet another set of data points to further confirm that the Biblical writers were not “making up” the story of God, Israel, and Jesus.

Most of you will probably not need to read any further, as this brief explanation of the benefits of radiometric dating, with respect to Christian truth, should be compelling. But if you still want to push back, you might want to read on….

What If You Are Still Skeptical About Radiometric Dating?

In general practice, scientists understand these anomalies and do their best to account for them in their measurements. Otherwise, why would they be using such a tool, if they knew that the tool was inherently flawed or misapplied? That would be like using a stapler to drive in a nail, when what you need is a hammer. Furthermore, just because your hammer missed the nail a few times, does not necessarily mean that you throw away your good hammer!

However, a more general problem concerns whether or not observations made in the present can actually help us know the past. In particular, one critical assumption is that the radiometric decay rates, of different substances, have remained constant over time. For the past seventy years, since radiometric dating has been in use, the decay rates, of various substances, have proven themselves to be very reliable. Using the time-honored principle of the present is the key to the past, advocates of radiometric dating have used this tool to demonstrate the great antiquity of the earth.

Yet some have argued that decay rates have indeed changed throughout history, in an effort to suggest that the scientific consensus for a 4.5 billion year old earth can not be trusted. Instead, we should be thinking about a 6,000 year old earth, which would be consistent with some interpretations of the Bible, that rely on a literal, six 24-hour day view of Genesis 1, for the creation of the world.

In principle, advocates of this type of skepticism might be right. Variable decay rates might explain a young, as opposed, to an old earth. It is within the realm of possibility (though most of my scientist friends tell me that this is a very remote possibility).

But there is a serious problem with this type of skepticism: We currently have no compelling evidence to support the assertion that radiometric decay rates have changed over time to support the Young Earth hypothesis. Scientists have tried various methods to see if decay rates can be altered, including high pressure, radical temperature changes, etc., but the results have been negligible. Still, the decay rates for various substances remain essentially constant. So until contrary evidence becomes available, the scientific consensus regarding the reliability of radiometric dating remains in good standing.

The irony behind such Christian skepticism of radiometric dating is that opponents of the Christian faith have been known to use the exact same arguments in order to attack the Bible! Consider the following example:

One particular critic of orthodox Christianity, Robert Eisenman, contends that the Carbon-14 dating method used to date the Dead Sea Scrolls was flawed (dig into the comments section of this previous Veracity post, to see what I am talking about). To Eisenman, radiometric dating can only give us dates relative to the testing of other samples, and not absolute dates for those samples. This is the same type of argument used by Christian critics of radiometric dating! 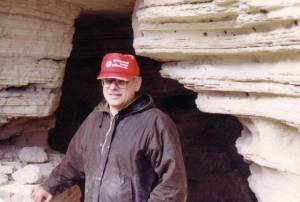 Robert Eisenman, at Cave 4 at Qumran, where the Dead Sea Scrolls were found. Eisenman’s sophisticated, yet ultimately, wacky theory all depends on distrusting the reliability of radiometric dating.

Eisenman believes that the most pertinent of the Dead Scroll documents were actually written after the period of Jesus of Nazareth’s earthly appearance. Eisenman’s ideas are based on the assumption that the Jewish community at Qumran, was really connected to the early Christians, and that a competing group of early Christians effectively “made up” a good amount of the New Testament. If you follow Eisenman’s complex argument, you can come up with an idea that explains away a great deal of the New Testament.

Eisenman’s punch line? Well, James the brother of Jesus, was the real successor to promote Jesus’ teachings (if Jesus even existed), and the Apostle Paul was the great fabricator of what we call “Christianity” today….. Pretty ingenious, but it is an idea that every orthodox Christian I know would completely reject.

If the Dead Sea Scrolls were written during the New Testament era, as Eisenman proposes, it would undercut the current scholarly consensus that the New Testament was built upon a particular Jewish context, that had been well-established for several centuries before Christ.

Perhaps you have never heard of Robert Eisenman before, but you probably have heard of Dan Brown, the well-known author of the blockbuster “novel” The Da Vinci Code. Eisenman’s conclusions differ from Brown’s own conspiracy theory, but their beliefs are both predicated on the same false assumption, namely that the Dead Sea Scrolls were largely the product of the early Christian movement.

Eisenman’s logic borders greatly on being conspiracy-theory through and through, all made possible by a failure to appreciate the reliability of Carbon-14 radiometric dating. Eisenman is a very interesting scholar, but he is wildly out of the mainstream. Even the most liberal, critical scholars of the New Testament think Eisenman is a bit nutty.

I get why some Christians get really leery about radiometric dating, but here is my point: If Christians feel compelled to use the same type of apologetic arguments, against radiometric dating, in support of the Bible, that non-believers use to discredit the Bible, have we really gained anything? You “save” a traditional reading of the Genesis creation story, but you risk undermining the antiquity and credibility of the very text, from which we get the Genesis narrative.

See this previous Veracity blog post from two yeas ago, and another post from a few more years ago, for more on radiometric dating, and why distrusting its reliability can be problematic for the Christian.

Clarke Morledge -- Computer Network Engineer, College of William and Mary... I hiked the Mount of the Holy Cross, one of the famous Colorado Fourteeners, with some friends in July, 2012. My buddy, Mike Scott, snapped this photo of me on the summit. END_OF_DOCUMENT_TOKEN_TO_BE_REPLACED
This entry was posted on Saturday, February 9th, 2019 at 8:00 am and tagged with Creationism, radiometric dating, Young-Earth Creationism and posted in Apologetics. You can follow any responses to this entry through the RSS 2.0 feed.
« Elisha, She-Bears, and the Cursing of Children?
What is an “Elder” of a Church? »

2 responses to “Does Carbon-14 Radiometric Dating Undermine the Bible (or Confirm It)?”