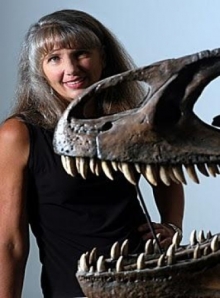 Mary Schweitzer. A mother, North Carolina State University researcher, and innovative dinosaur tissue detective……..Or is she a dupe, misled by her scientific colleagues?

As we lead into week two this coming Sunday of our 2013 Facts and Faith Symposium, we will be exploring the intersection of Biblical faith and Science as it relates to the age of the earth. One question we received this past week was:

What happened to the dinosaurs, and how were they destroyed?

This is a hot question these days, in view of the recent dinosaur discovery in southern Utah. According to National Geographic, researchers have found a new ancestor to the terrifying Tyrannosaurus rex, nicknamed the “King of Gore”. This is an eery reminder of yet another famous discovery of yet another dinosaur …. in Hell.

That’s correct. You heard me right.

There are dinosaurs in Hell.

Well….that is, Hell Creek in nearby Montana.

In Search of Dinosaur Blood

Starting in 1997, a team of researchers found a nearly fully intact Tyrannosaurus rex embedded in a rocky Montana canyon, the Hell Creek Formation. The scientists were hoping to airlift the dinosaur out of the canyon for further analysis. Unfortunately, they were not able to get a helicopter big enough to carry the fossil out of there. With terrible anxiety, the researchers agreed to cut the leg bone of their prize in order to retrieve their specimen in several pieces.

One of the researchers, paleontologist Mary Schweitzer, had an idea. She took some of the bone fragments from the fracture cut and analyzed what was inside. What she found shocked the scientific community. What she found were the remnants of dinosaur tissue and blood cells. How could tissue and blood survive relatively intact in an ancient dinosaur without total decay?

A number of Young Earth Creationists where thrilled by this discovery. This piece of evidence helps to demonstrate their case that the earth is less than 10,000 years old. Surely, the existence of dinosaur blood and tissue indicates a young age for this dinosaur fossil, and therefore for a young earth!

However, what is often not reported by some in the Young Earth community is that Mary Schweitzer, the primary researcher of the dinosaur tissue, is an evangelical Christian. Though Schweitzer grew up with a belief of a Young Earth, further biblical and scientific research led her to accept an Old Earth view of natural history. Her analysis shows that the bones of the dinosaur were found in rock formations that are clearly around 65 million years old, considerably older than what the Young Earth community claims. Granted, the discovery of this dinosaur tissue was not expected, and she has been challenged by others in the mainstream scientific community. Nevertheless, she confidently finds that her discovery is fully consistent with an Old Earth view of God’s creation, and her colleagues greatly respect the quality of her research.

More on Schweitzer’s story can be found on the following video clip from the BBC, and this interview with her here regarding her Christian faith.

This story highlights a problem with how Christians sometimes have conflicting opinions regarding Science and the Bible, illustrated by the type of question we received at our Symposium. The Young Earth community argues that dinosaurs roamed the earth during the time of Adam and later people. Eventually, during the flood of Noah, most, if not all, of the dinosaurs were wiped out. Their fossil remains are a result of the great global flood of Noah around 2400 B.C.

However, this view flies in the face of the bulk of modern science which states that the dinosaurs lived and died out millions of years ago. Scientists who accept an Old Earth view of natural history argue that the mainstream science approach has much, much, much better scientific credibility than the Young Earth view. Furthermore, such an approach does not compromise a confident view of the authority of God’s Word in the Bible when interpreted within the proper context. The dinosaurs would have been long gone eons before the local flood devastated the known world of Noah’s time.

Science is never fixed. We are constantly learning new things, so there is always the slight possibility that the predominate narrative put forth by modern science is incorrect. However, which is the better approach for the Christian? Should we be swimming upstream against the tide of modern science in order to defend the Bible, or should we be seeing how God’s truth revealed in Nature and in the Bible both complement one another?

There are other, less controversial approaches that lend more support for a Young Earth perspective, and at Veracity we try to put forward the best arguments from this perspective, including:

Please note that the above arguments are mostly philosophical and theological in nature, and not entirely scientific. You should study these various arguments, and then you can draw your own conclusion, to see if a Young Earth perspective is more faithful to Scripture and supportive of genuine science than other perspectives. In my view, these arguments are worth serious consideration.

Nevertheless, my primary objection is with certain Young Earth apologetic strategies (though clearly, not all!) that attempt to discredit the mainstream of peer-reviewed scientific work with rather overstated and often clumsy ideas.  When otherwise sincere believers are drawn towards speculative arguments regarding topics like Schweitzer’s dinosaur blood, they make the rather bold assumption that other Bible-believing scientists like Mary Schweitzer are simply swallowing an “anti-biblical” set of assumptions. To their credit, the most responsible Young Earth apologists are quick to point out that there are anomalies that do not fit into accepted scientific paradigms.   But it takes more than just the exposure of anomalies to overturn well-established scientific theory.

For me the deciding factor comes back to the Bible. How do we interpret verses like Psalm 19:1-2 (ESV)?

The heavens declare the glory of God,
and the sky above proclaims his handiwork.
Day to day pours out speech,
and night to night reveals knowledge.

Do we accept God at His Word, or are we tempted to believe something else, like “the heavens hide the glory of God” or “the sky above obscures his handiwork?”

My Bible does not say this. How about your Bible?

Are paleontologists like Mary Schweitzer dupes as some in the Young Earth community claim? Or is the real problem a credibility issue among some in the Young Earth Creationist community, failing to tell their audiences the full story or even sadly misleading their audiences with distorted information? After all, if you find it difficult to believe what a Young Earth Creationist says about science, why would you think that what they are telling you about Jesus Christ is trustworthy?

Meanwhile, Back in Hell

OK. So I overstated in the beginning. We know that dinosaurs are not literally in hell, biblically speaking. Furthermore, most of the folks that I know who would consider themselves as “Young Earthers” are very sincere in their faith and have a deep, genuine abiding love for the Lord Jesus. But I get troubled when I find that sincere, yet not so well-informed, believers will pick up on these type of stories on Christian radio and other media outlets without doing the appropriate critical examination of what is being claimed.   Then these well-meaning Christians will go out and engage in conversation with their educated unbelieving neighbor, and their neighbor will look at them like they have two heads and five arms!

So, when I read Jesus’s rebuke against the scribes and Pharisees that “tie up heavy burdens, hard to bear, and lay them on peoples shoulders” (Matthew 23:4 ESV),  I get very concerned. Very concerned.

We need to pray for one another, that we treat others who disagree with us with gentleness and respect, and that we avoid the temptation to overstate our case, or otherwise misrepresent the arguments of others.

The consequences are serious. The consequences can be eternal. Jesus was giving a stern warning against religious teachers who make it more difficult for others to come into the kingdom of God:

You snakes! You brood of vipers! How will you escape being condemned to hell? (Matthew 23:33, emphasis mine)

Let us walk in wisdom towards those who are without…. and keep our focus on Jesus Christ, instead of drawing attention towards unwarranted and speculative ideas.

Compare the different approaches to Mary Schweitzer’s discovery of dinosaur blood and tissue from an Old Earth perspective and its rebuttal from a Young Earth perspective. Which approach better serves the cause of Christ?

For the best detailed look at the geological evidence for the earth’s age from a Christian perspective in book form, written by men who deeply love Jesus and His infallible Word in Holy Scripture, I would highly recommend Davis A. Young and Ralph Stearly, The Bible, Rocks and Time: The Geological Evidence for the Age of the Earth. It is an updated rewrite of the classic book on this topic, Christianity and the Age of Earth, the book that transformed my life on this topic during my years in college in the 1980s.

The Reliability of Radiometric Dating?

As mentioned above, most responsible Young Earth Creationist apologists will readily admit to the general, overall reliability of radiometric dating, though they believe that the anomalies associated with the different dating methods indicate a need to revise our view of radiometric dating. Typically, these Young Earth Creationists will contend that the rates of decay associated with radiometric dating materials have probably changed over time. Can the rates of decay really change without violating the known laws of physics, or does this come dangerously close to violating God’s declaration that He would no more change the fixed laws of nature than He would reject His covenant with the nation of Israel (Jeremiah 33:25-26)? You decide which approach is most faithful to God’s Word.

Perhaps the most famous (or infamous) dispute regarding the reliability of radiometric dating methods used to determine the age of rocks and their embedded fossils is Steve Austin’s much published report of a serious anomaly in the age of the rocks found at the lava dome of Mount St. Helen’s. Even though the rock formation only goes back to the volcano’s eruption in 1980, Austin’s submission of his samples to the K-Ar method of radiometric dating came up with a date of near several million years, an enormous discrepancy. You will need to get your science geek hat to understand this, but you can read about the Young Earth view of this report here and then you can read about the Old Earth rebuttal here. For a fairly brief, relatively entry-level discussion of modern radiometric dating methods, please view this article with nice graphics at www.nature.com.

Clarke Morledge -- Computer Network Engineer, College of William and Mary... I hiked the Mount of the Holy Cross, one of the famous Colorado Fourteeners, with some friends in July, 2012. My buddy, Mike Scott, snapped this photo of me on the summit. END_OF_DOCUMENT_TOKEN_TO_BE_REPLACED
This entry was posted on Wednesday, November 13th, 2013 at 5:44 pm and tagged with Christianity, Creationism, Dinosaurs, Facts & Faith, veracity and posted in Facts & Faith. You can follow any responses to this entry through the RSS 2.0 feed.
« Symposium 2013 Roundup Week One
Symposium 2013 Roundup Week Two »

2 responses to “Dinosaurs in Hell!!”