The Civil War as a Theological Crisis

A steep, dugout embankment defending Redoubt #1, off of Quarterpath Road, where Confederate troops waited for advancing Federal soldiers to attack from Tutter’s Mill Pond below, during the Battle of Williamsburg. Sadly, relatively very few of my fellow Williamsburg neighbors even know that this place even exists.

Does the American national tragedy over the Civil War have something to teach us about how we are to read the Bible?

As a kid, I grew up near the remains of an oft-forgotten, Civil War battlefield. Whenever I ran among the dugout, redoubt embankments, I always kept in mind the warnings of neighbors to be careful, as there was likely to be found unexploded ordinance somewhere underneath my feet.

On the same day, hundreds of miles away, when Mexico was resisting the French on May 5, 1862, remembered now as Cinco de Mayo, Federal forces met Confederate forces just east of my town, for the Battle of Williamsburg, with nearly 4,000 casualties among both sides. Within a couple of years, the significance of that battle faded, displaced in memory by placenames like Antietam and Gettysburg.

Efforts to preserve the battlefield from being run over by suburban housing developments have been somewhat, moderately successful, though the land, as well as the intellectual debates that the led up to the war, have sometimes been forgotten. I often wonder myself, if such a national crisis could have been averted, without such terrible bloodshed.

Something to Ponder, on the 154th Anniversary of the Battle of Williamsburg

Notre Dame historian, Mark Noll, in The Civil War as a Theological Crisis, makes the case that the dominant mode of thinking among Protestant evangelical Christians, before the first shots were fired in 1861 in South Carolina, was that the Bible should be read literally[1]. The philosophy of the day suggested that a “common sense” reading of Holy Scripture made the Christian individual the most reliable interpreter of the Bible. Simply “reading what the Bible says” is enough to understand the message of sacred Scripture. There is no need to “interpret” the Bible.

Southern proslavery supporters made effective use of this line of thinking, arguing that the Bible nowhere condemned slavery. The Old Testament seemed to justify the institution of slavery, Jesus made no mention of it in the Gospels, and Paul encouraged Onesimus, a runaway slave of Philemon, to return voluntarily to his master. Proslavery apologists drew then what appeared to be an obvious conclusion: the American practice of slavery was sanctioned by the Bible. Did the Apostle Paul not say “slaves, obey your masters” (Ephesians 6:5)? 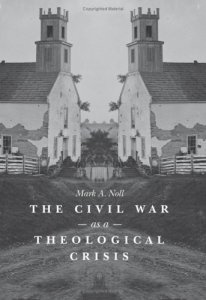 Mark A. Noll’s The Civil War as a Theological Crisis shows us that the failure to read the Bible properly can have devastatingly tragic results.

Northern abolitionist thinkers, particularly along the lines of radicals like William Lloyd Garrison, at first sought to use the Bible as an intellectual weapon against slavery, appealing to the “spirit” of the text as opposed to taking a “literal” approach to the Bible. These abolitionists had their own Bible proof texts. In Christ, there is no slave nor free person, appealing to the Apostle Paul in Galatians 3:28. But some, like Garrison, went further and grew impatient with such reasoning, eventually believing that the Bible itself stood in the way of genuine Christian morality and the abolition of slavery.

Proslavery advocates saw in such abolitionist rhetoric an attack, not simply on slavery, but rather on the authority of the Bible as a whole. They distrusted the abolitionist wing of the churches, where such an appeal to the “spirit” of the Bible, as the basis for emancipation, was thought to be an insidiously subtle way of undermining that same Bible. It is no wonder, that in the subsequent century, the so-called “Bible belt” ran along sectional lines where proslavery proponents were most vocal in the United States. In the minds of many American Christians,  slavery needed to be defended in order to defend Christianity[2].

However, as Mark Noll carefully observes, there was yet a third approach taken on the subject of slavery that was largely ignored by the two dominant intellectual parties in American slavery polemics. This third approach made the case that one need not abandon Scriptural authority to make a solid case against the uniquely American institution of slavery. For American slavery was a system based on racial distinctions that simply could not be supported by careful exegesis of Scripture[3]. It would take at least another hundred years before Americans would seriously address the question of the sin of racism in American society, during the Civil Rights Movement. Granted, slavery in general is not explicitly condemned in Scripture, but basing a system of slavery on the color of a person’s skin, often with very little opportunity to gain emancipation during one’s lifetime, can not be supported in this, more responsible approach to the Bible.

Mark Noll argues that there were a few Americans thinkers who did make these type of arguments, but it was mostly foreign observers, namely Christian thinkers in Canada and Europe, who could see the issues more clearly than could their American counterparts. If such arguments would have been taken seriously, one could imagine that the theological crisis of slavery might have been resolved by appealing both to the authority of the Bible and the elimination of an inherently corrupt system of racially-based bondage and servitude, without hinting of compromise.

Sadly, this third approach was largely neglected by the primary intellectual forces of mid-19th century America. Traditional proslavery conservatives were suspicious of such sophisticated approaches to the Bible, and the more liberal, abolitionist supporters lacked the patience for anything that did not suit their broad moral agenda. As a result, the question over slavery in the 19th century was resolved, not by genuine debate over the proper interpretation of Scripture, but rather by armies, guns, and spilled blood.

What Can We Learn?

I read Noll’s book as a seven-hour audiobook, running errands around town for several weeks, as I passed by parts of the Battle of Williamsburg defensive embankments. Each embankment made me consider the loss of hundreds of lives, during just this one military engagement. The loss was essentially due to a massive cultural failure to read the Bible properly and apply it in obedience to Christ, despite the voices of those faithful servants of God and wiser students of the Bible, who were drowned out by the noise of canon and gunfire.

You would be hard pressed to find any follower of Christ today who believes that racially-based slavery in 19th century America was somehow ordained, much less permitted, by God. Such consensus was not the case 154 years ago.

Is there anything we can learn from the theological crisis of the Civil War? The implications of Noll’s thesis are profound, as the American church today faces other issues that threaten to drive believers apart. Mark Noll effectively writes a cautionary tale, that Christians in the early 21st century would do well to learn from[4].

[^1]  On “taking the Bible literally,” please read this previous Veracity post. If you think about it, no one really takes the entire Bible “literally.” We all make decisions on how to read the Bible based on assumptions we make about how to best interpret the Bible. The question we need to ask is if our interpretive assumptions are indeed valid or not.

[^2]  Progressive Christian blogger, Rachel Held Evans, recalls the shock she had in learning how proslavery advocates viewed abolitionists in the churches, when she read Noll’s The Civil War as a Theological Crisis. You do not need to draw the same, progressivist conclusion that Evans does to appreciate the profundity of the theological crisis. Read New York City pastor, Timothy Keller, offer a counterpoint to the type of conclusion Evans draws, in Keller’s review of a different book on a related topic, that still reflects on Noll’s thesis.

[^3]  For a closer look at how a centuries long, irresponsible approach to one passage of the Bible led many Christians to wrongly believe that American, life-long, racially-based slavery was somehow “okay,” please read this Veracity posting on “Noah’s Curse.”

[^4]  For a great review of Mark Noll’s The Civil War as a Theological Crisis, I recommend this one by Robert Tracy McKenzie, another excellent evangelical historian.

Clarke Morledge -- Computer Network Engineer, College of William and Mary... I hiked the Mount of the Holy Cross, one of the famous Colorado Fourteeners, with some friends in July, 2012. My buddy, Mike Scott, snapped this photo of me on the summit. END_OF_DOCUMENT_TOKEN_TO_BE_REPLACED
This entry was posted on Thursday, May 5th, 2016 at 8:15 am and tagged with civil war, mark noll, rachel held evans, racism, Robert Tracy McKenzie, slavery, Tim Keller and posted in Topics. You can follow any responses to this entry through the RSS 2.0 feed.
« He is Risen!… (in the East)
Hugh Ross »

2 responses to “The Civil War as a Theological Crisis”