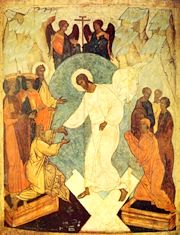 He is Risen! The Resurrection of Christ, by St. Isaac of Syria Skete (Boscobel, Wisconsin), credit: the Orthodox Wiki.

To all of my Eastern Orthodox friends, I say “He is Risen!” on this day when you celebrate Pascha.

For those evangelical friends who have no idea what I am talking about, Pascha is the original name for Easter. Pascha is essentially a transliteration of the Hebrew word for “passover,” or pesach. Way back at the Council of Nicea in 325 A.D., the famous church council that resolved the dispute over the deity of Christ, which made way for the mature formulation of the doctrine of the Trinity, the council also established a uniform method for calculating the date for celebrating the Resurrection of Jesus.

However, the church in those days used the Julian calendar, which proved to be flawed in its ability to keep track of the solar year. The Western churches later fixed this by going to the current Gregorian calendar. However, the Eastern churches still have retained the old, Julian calendar method of calculation for Pascha. Hence, this year, the celebration of Pascha falls on May 1st, instead of March 27.

There are some who reject Easter because of its supposed connection to Germanic paganism. But since Pascha is really the earlier name, maybe Christians in the West can drop “Easter” and adopt “Pascha” instead, for now on, and be rid of this fringe complaint.

How about this? I have an idea. Next year, Western Easter and Eastern Pascha will fall on the same date, April 16. How about if the West adopts the “Pascha” name and the East adopts the updated Gregorian calendar calculation system, so that we can all celebrate the Resurrection of our Lord on the same day, in future years? Would this not move us a step towards Christian unity?

Do I have any takers?

Clarke Morledge -- Computer Network Engineer, College of William and Mary... I hiked the Mount of the Holy Cross, one of the famous Colorado Fourteeners, with some friends in July, 2012. My buddy, Mike Scott, snapped this photo of me on the summit. END_OF_DOCUMENT_TOKEN_TO_BE_REPLACED
This entry was posted on Sunday, May 1st, 2016 at 12:03 am and tagged with Easter, pascha, passover and posted in Topics. You can follow any responses to this entry through the RSS 2.0 feed.
« Bono and Eugene Peterson on the Psalms
The Civil War as a Theological Crisis »