Did King James Order His KJV Translators to Conceal the True Meaning of Baptism? 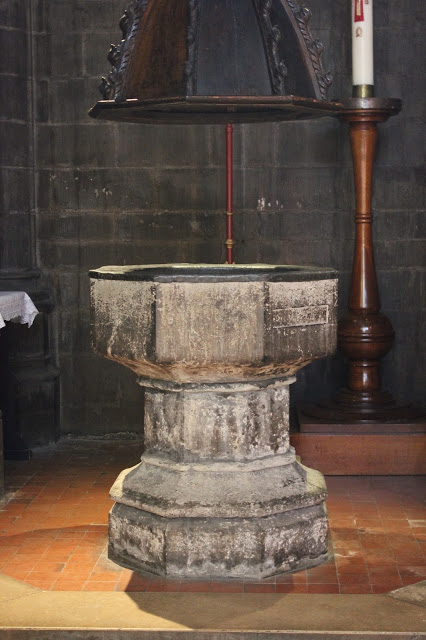 A baptismal font in England, dating back to 1405, large enough to be used for full infant immersion, throughout the Reformation period. Note the table top on the left hand side of the photo, to gain some perspective as to how big this baptismal font really is: Saint Bartholomew the Great Church in London.

This might be a bit nerdy, but it is a pet peeve of mine: Is the proper mode of baptism by pouring, sprinkling, or full immersion? What follows is an example of how an arguably plausible theological doctrine can be improperly justified with a flawed piece of historical “evidence.” The actual history of baptism is far more interesting, and it makes for a good rallying point for discussing the Scriptural mode of baptism.

I recently listened to a YouTube sermon whereby the pastor claimed that King James, the early 17th century English king, who authorized the famous 1611 King James Version translation of the Bible, purposely sought to obscure the true meaning of baptism. King James “did not allow [his Bible] translators to translate [the word] ‘bapto’” into English. The Greek word “bapto” is where we get the English word “baptism,” which is basically a transliteration from Greek into English. Most concordances, such as Strong’s, will translate “bapto” as to “dip” or “immerse.”

So, why did King James steer his translators clear from actually translating this Greek word into English?  The pastor went onto explain, “Because the Anglican Church did not practice what [baptism] means. The Anglican Church sprinkled.”

My ears perked up. But the pastor continued…

The problem with leaving “bapto,” or our “baptism,” untranslated is that it has encouraged people to interpret the word however we imagine it to mean. As a result, this ambiguity about “baptism” has led English-speaking Christians, since the time of King James, to be unsure as to how baptism should be practiced in the churches. Should we practice sprinkling, pouring, or full immersion? Readers of the King James Version of the Bible, the pastor concludes, are left in this state of confusion. What a tragedy.

Well, when I heard this, my fallacy-o-meter started to register near the red-zone. I will not link to his sermon, as this is pure bunk. Things like this just annoy me….

Obviously, this pastor rejects any form of baptism that is not full immersion, which would implicitly include most modern practices of infant baptism. My longtime pastor, Dick Woodward, from years ago, told the story of a Baptist kid, who had a cat that had gotten himself entangled in some pile of garbage, and the cat came out smelling just awful! The Baptist kid wanted to wash this cat, before letting him into the house. He tried to immerse the cat into a tub of water, but the cat resisted. He tried to pour water on the cat, but the cat kept dodging the water. Frustrated, to no end, and scratched up by the rebellious cat, the Baptist kid finally uttered, “Cat, you stink so much, that I will make a Presbyterian out of you, and just sprinkle you, and let you go to hell!“

The Mode of Baptism

Baptism is a frequently rehearsed discussion in the history of the church. I wrestled with this myself, as I was baptized as an infant, only coming to faith later as a teenager, unsure if it was permissible for me, or even necessary, to be baptized again as an adult. The growing trend, among evangelical believers today, only supports “believer’s baptism;” that is, baptism for believing adults, or older children, only. I get that. But my purpose here is not to argue one way or another regarding the proper timing of baptism. My point is this: There are some very strong evidences that one can cite to support believer’s baptism, by immersion alone. Unfortunately, this is not one of them.

This YouTube pastor’s particular argument, about the King James Version of the Bible, is sadly a prime example of using anachronism to make a case, that has no historical validity.

In the pastor’s defense, he might have read this particular argument, against infant baptism, by citing some source that claimed to be authentic. We can all thank the Internet for that.

But I have learned that it really pays to do your homework when you advance a particular claim like this, that has the ring of a conspiracy theory. Is there solid scholarship out there that confirms such a claim? Is there really any substance to the idea that King James purposely ordered the KJV translators, in 1611, to conceal the true meaning of baptism, in order to allow for the Anglican practice of sprinkling infants to go unchallenged?

Unfortunately for this pastor, the Church of England, otherwise known as the Anglican Church, did not think of baptism, nor practiced it, in the way that he supposed that it was done in the 16th and early 17th centuries. Here are some points of evidence, with links and/or references to the sources:

True, the Church of England did advocate infant baptism, as opposed to “believer’s baptism” alone, as practiced by the Anabaptists. But the standard had been to fully immerse infants, a practice that had been endorsed for centuries. The practice was moderated to allow for pouring, and eventually sprinkling, out of concern for the baby’s health, and not out of some desire to wiggle out of the supposed clear teaching of Scripture. Today, pouring or sprinkling might be preferred to avoid freaking out the parents.

If you really want to press the matter, you should blame the English Puritans, who followed John Calvin closely, for paving the way for the sprinkling of infants, and leave King James, who was not wholly enamored with John Calvin, out of it.

As mentioned above, this does not fully address the question of whether or not infant baptism is taught in the Bible, and space does not allow me to address this question. As to the mode of baptism, or how wet you get, it is of no consequence. There is no Scriptural source that indicates that certain persons will be barred from God’s heaven, simply because of a lack of water used at baptism. Immersion is preferred, but then, the baptismal pool in our church is fed with warm water, and I do not live near the Arctic Circle. Furthermore, I am not a “King-James-Only” person. Far from it.

My point is simply to say that if you are going to make a case for a particular doctrinal position, at least do your homework to make sure that the evidence you are trying to present has any verifiable substance to it. Otherwise, it makes your line of reasoning to support your larger argument sound foolish.

However, if you want to fault the Anglican Church, Presbyterians, or other traditions, that today rarely practice immersion and instead typically adopt either pouring or sprinkling for infants, go right ahead. The Eastern Orthodox, in comparison, are not so squeamish, as many, if not most, Eastern Orthodox practice full immersion for infants.

Clarke Morledge -- Computer Network Engineer, College of William and Mary... I hiked the Mount of the Holy Cross, one of the famous Colorado Fourteeners, with some friends in July, 2012. My buddy, Mike Scott, snapped this photo of me on the summit. END_OF_DOCUMENT_TOKEN_TO_BE_REPLACED
This entry was posted on Saturday, May 19th, 2018 at 7:00 pm and tagged with baptism, infant baptism, mode of baptism, pouring, sprinkling and posted in Topics. You can follow any responses to this entry through the RSS 2.0 feed.
« The Jerusalem Question: What is “Covenant Theology” vs. “Dispensationalism”?
What Did You Think of The Royal Wedding Sermon? »

2 responses to “Did King James Order His KJV Translators to Conceal the True Meaning of Baptism?”