One of the things I was excited about visiting Prague the most was learning more about Jan Hus. On this Reformation Day, I thought it appropriate to remember Jan Hus, and make a second blog post about the trip that my wife and I took to Europe this past October, to see the Passion Play in Oberammergau, Germany.

Jan Hus is a hero in the modern day Czech Republic. Czechs remember him as a courageous individual who stood up against the system. Hus was crushed for his efforts, but a lot Czech history was about being crushed by institutional powers. The story of Hus has inspired resistance efforts in the pursuit of freedom. At the end of World War One, the Czechs were able to throw off centuries of rule by the Habsburg Empire, which included an imposed Roman Catholicism and closing of Protestant churches. In 1938, the Western powers abandoned the Czech nation and delivered it into the hands of Hitler’s Nazi Germany, for the sake of an appeasement that never lasted. After that war, the Czechs eventually threw off the yoke of the Communist Soviet Union, by the early 1990s. Jan Hus has been an inspiration during each cycle.

Sadly, the Christian convictions that underpinned the spirit of Jan Hus have often been neglected in the story. In the early 15th century, Jan Hus was a priest who was able to get his hands on the writings of John Wycliffe. Wycliffe exposed Hus to the very ideas that eventually captivated the mind and heart of the German Reformer, Martin Luther, almost exactly one hundred years later.

However, the printing press had not been invented yet. It would be another 40 years before the Gutenberg Bible would roll off the first printing press. Luther used the new media technology, the 16th century version of the Internet’s social media, to great effect. Jan Hus, on the other hand, had no such media outlet. With no 15th century equivalent of Twitter or Instagram available to him, Jan Hus had very little resources available to advance his message. 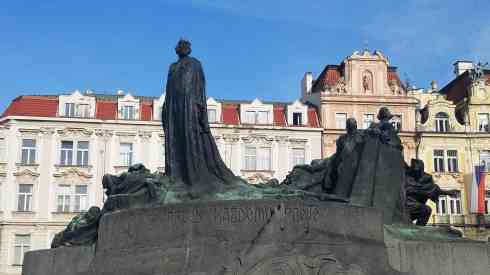 The monument stands as a symbol for resistance in the face of tyranny…. but it also stands for the principles of the Reformation, for the Scriptures that Jan Hus sought to teach the people.

In 1414, the popular Prague preacher was summoned to the Council of Constance, to report on what he had been teaching the people of Prague in his sermons. Hus was given a promise of safe conduct, that he not be harmed if he appeared before the council to defend his views about the Bible. He had been preaching to the people in the native Czech language, and not in Latin. He had championed the full authority of the Scriptures, and spoke out against church traditions that he believe contradicted the Bible. He taught that no bishop or pope had the right to call up men to take up arms against others in the name of the church, a direct critique of the Crusading mentality. He believed that Christians should be able to take communion in both kinds, the bread and the wine. He spoke out against indulgences. In many ways, Jan Hus was the Luther before Luther.

For these type of things, Jan Hus was deemed a heretic at the Council of Constance, which forfeited him the right of safe passage to Constance. Hus had been deceived. So much for such promises, heh??  On July 6, 1415, Jan Hus was burned at the stake.

Hus’ Czech listeners back in Prague were furious. What followed was the Hussite Wars, and eventually the Bohemian church enjoyed a measure of autonomy within the medieval church, joining up to a certain degree with the Protestant efforts of the German and Swiss Reformers, a hundred years later.

As our time in Prague was near the end of our trip to Europe, I was not able to make it over to Jan Hus’ church, Bethlehem Chapel. But I did get to see the great monument sculptured in his honor. The work of the artist, Ladislav Šaloun, was officially unveiled in the main town square of Prague, at the end of World War I, when the first Czech Republic was founded. The sculpture was completed just a few years earlier, at the 500th anniversary of Hus’ martyrdom (1915).

Though Jan Hus was surely a forerunner to the Protestant Reformation, he differed from the later Reformers on certain matters. While his theological mentor, John Wycliffe, denied the medieval Western doctrine of transubstantiation, Jan Hus was actually okay with transubstantiation. Hus affirmed the real presence of Christ in the communion elements, but he was adamant that Christians be given the opportunity to receive both the bread AND the wine in the Lord’s Supper, in a day when the church generally withheld the wine from the congregation.

So, in some ways, Hus occupied a middle ground between Roman Catholicism and the later 16th century Reformers, like Calvin, Zwingli, and Luther, who all rejected transubstantiation, but who moreover differed among themselves regarding how to think of the Last Supper. In this sense, Hus stands as a model for seeing a type of third-way through the Roman Catholic / Protestant divide. See my previous blogs posts about Jan Hus on Veracity (#1 and #2) for more.

Regardless of what one thinks about the nature of the Last Supper, it is clear that many of the reforms that Jan Hus argued for were surely needed in the medieval church. Sadly, Jan Hus came along at a time when the church was not completely ready to hear his message. However, in 1999, a symposium on Hus was held in Rome where Pope John Paul II issued a historic apology for his “cruel death” and praised him for his “moral courage.”On this Reformation Day, we would do well to consider the contribution of Jan Hus to restore our faith to a truly Biblical Christianity. 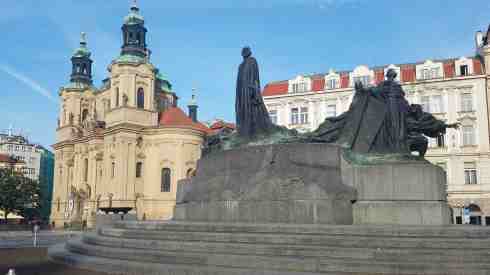 Several messages are displayed, but the one at the front is roughly translated: “You love the truth that everybody desires”

Clarke Morledge -- Computer Network Engineer, College of William and Mary... I hiked the Mount of the Holy Cross, one of the famous Colorado Fourteeners, with some friends in July, 2012. My buddy, Mike Scott, snapped this photo of me on the summit. END_OF_DOCUMENT_TOKEN_TO_BE_REPLACED
This entry was posted on Monday, October 31st, 2022 at 6:00 pm and tagged with europe, jan hus, Oberammergau and posted in Topics. You can follow any responses to this entry through the RSS 2.0 feed.
« Oberammergau – The Passion Play
Defenestration of Prague & The Thirty Years War »