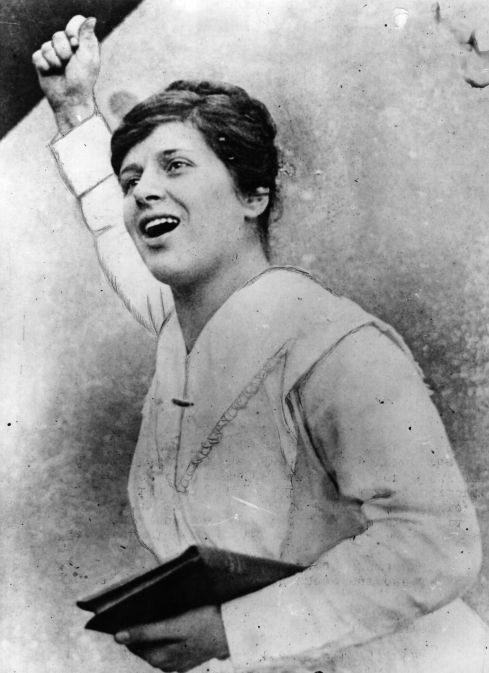 “Sister Aimee” Semple McPherson was the most famous female evangelist of the early 20th century. In an age when many Christians believed then (just as many still do) that women were not to be preachers, Sister Aimee broke all of the rules, becoming a founder of a leading Pentecostal movement, the International Church of the Four Square Gospel, and one of America’s best known and celebrated radio evangelists. Here is Sister Aimee speaking about prohibition:

She was not simply a leading church figure, she was a public celebrity, with a broad-based appeal. Take a look at this 90-second video news report of Sister Aimee returning to Los Angeles, from a preaching tour.

But according to historian Timothy Gloege, the author of Guaranteed Pure: The Moody Bible Institute, Business, and the Making of Modern Evangelicalism, Sister Aimee’s use of theatrics and elaborate props and costumes had overshadowed the more “respectable evangelicalism” headquarters on the West Coast, at the nearby Bible Institute of Los Angeles (BIOLA). Sister Aimee’s pomp and flair embarrassed the more reserved, yet still determinedly evangelistic disposition of those Christians, who found the vaudevillian drama of Sister Aimee’s style rather off-putting.

Sister Aimiee had become a symbol of what a certain strand of evangelicalism was becoming. She was a bolster to an emerging egalitarianism, affirming the validity of women serving in top positions of Christian leadership, a movement having its roots in the Holiness and Pentecostal traditions, of the late 19th and early 20th centuries.

But her ministry reputation was deeply tarnished due to a serious scandal. In May, 1926, Aimee Semple McPherson disappeared, while taking a walk near a California beach. After she had gone missing for five weeks, she reappeared in an Arizona hospital. Sister Aimee claimed that she had been kidnapped and taken to Mexico, where she was able to escape from her captors, and made her way by foot to the Arizona border, where she collapsed and became hospitalized.

Her most loyal supporters believed her story, but others were more cynical, believing that she had been having an affair with a married man. The folk song writer, Pete Seeger, takes the more cynical view in his “The Ballad of Aimee McPherson” (WARNING: SOME CONTENT MAY NOT BE SUITABLE FOR SOME AUDIENCES).

Regardless of the controversy, the story of Aimee Semple McPherson continues to fascinate to this day.

Read these other Veracity posts for more on Sister’s Aimee’s contribution to the egalitarian movement, and lingering questions about her personal reputation.

Clarke Morledge -- Computer Network Engineer, College of William and Mary... I hiked the Mount of the Holy Cross, one of the famous Colorado Fourteeners, with some friends in July, 2012. My buddy, Mike Scott, snapped this photo of me on the summit. END_OF_DOCUMENT_TOKEN_TO_BE_REPLACED
This entry was posted on Saturday, May 2nd, 2020 at 8:00 am and tagged with aimee semple mcpherson and posted in Witnesses. You can follow any responses to this entry through the RSS 2.0 feed.
« Blessed, by Kate Bowler: The Quandary of the Prosperity Gospel
Billy Sunday: Great American Evangelist of the Early 20th Century »