Why Keep the King James Version? (… Or Why the “Thee’s” and “Thou’s” Are More Important Than You Think)

I am a big advocate for modern English Bible translations. However, even though I am not a “King James Only” Bible person, I do think there is a good argument for hanging onto a copy of the King James Version for Bible study.

I read Mark Ward’s marvelous Authorized: The Use and Misuse of the King James Bible recently, and he makes a very gentle and persuasive case for using multiple Bible translations when studying the Bible. It is perfectly fine to have one Bible version as your “Go-To” translation of choice. But, if possible, we should make use of several versions when doing in-depth Scriptural study, to give us insight that our favorite translation might be missing.

For example, some might be tempted to ditch the old King James Version, as one among your versions, due to its archaic language. But there is a good case for why you should hold off on doing that.

As noted in my book review of Mark Ward’s book, the use of the “thee’s” and “thou’s” in the King James Version, might lead us to think that such language shows a special reverence for God, but this would be wrong. The problem has been accentuated in recent years, by the decision of those who produced the New American Standard Bible (NASB), back in the 1970s. The NASB kept the “thee’s” and “thou’s” with respect to referring to God, and ditched that language when addressing non-divine characters. Apparently, readers of the NASB liked the traditional language for God, so the NASB committee decided not to buck that tradition.

Unfortunately, traditions can easily confuse people. The NASB folks finally fixed that problem by getting rid of all “thee’s” and “thou’s,” by the time of their 1995 revision, but the stigma associated with “thee’s” and “thou’s,” as being formal and more reverent, was pretty well common knowledge by then, and difficult to uproot. Interestingly however, the original purpose for including the “thee’s” and “thou’s” in the King James Version,  in the first place, has been often missed.

When William Tyndale sought to translate the Bible from the original languages into 16th century English, the influence of the “thee’s” and “thou’s,” even in his day, was starting to vanish. But Tyndale noticed that, aside from the older way of distinguishing between formal and informal (or familiar) pronoun usage, as is done in languages like French and Spanish, the “thee’s” and “thou’s” served an additional purpose in English. It also allowed for distinguishing between singular and plural pronoun usage.

A lot of regional dialects try to make up for this deficiency with some rather awkward, at times, solutions. For example, I grew up in the South saying “you all” or “y’all,” if I wanted to specify a plural sense of a second person pronoun. A lot of my friends from up North, on the other hand, say “you guys,” instead.

It drives English grammar referees crazy. But that is just the way it is (Kind of like there is no third person, non-gender specific, singular pronoun. In the past we might have said “he” or “she,” but never “it.” But nowadays, it looks like the third person plural personal pronoun covers everything, with the awkward “they,” as the ultimate solution…. but that’s a completely different topic!). 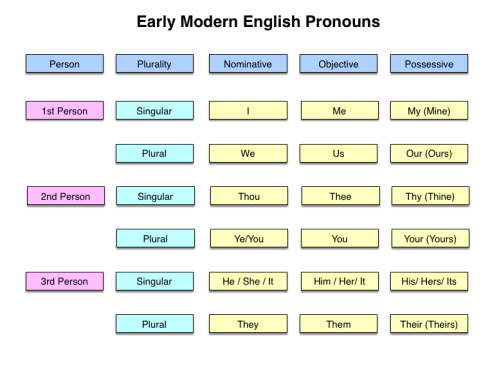 Tyndale pretty much threw out the formal/informal distinction for pronouns, and focused on the singular/plural pronoun instead, and the King James Version translators kept his efforts going, when the King James Bible was completed in 1611. It may not seem like a big deal, but consider Luke22:31-32. Here it is in the ESV:

“Simon, Simon, behold, Satan demanded to have you, that he might sift you like wheat, but I have prayed for you that your faith may not fail. And when you have turned again, strengthen your brothers.” (ESV)

The footnotes in the ESV do help you out here, but without them, you would be confused. Is Jesus speaking specifically ONLY to Simon Peter? Since “you” might be singular or plural, it is not clear.

Thankfully, the KJV helps you out, right away, to figure this out:

And the Lord said, Simon, Simon, behold, Satan hath desired to have you, that he may sift you as wheat: But I have prayed for thee, that thy faith fail not: and when thou art converted, strengthen thy brethren. (KJV)

Notice how the “you” takes on the early modern English sense of being a plural pronoun, whereby all of the disciples are being addressed, in the first part of the passage. But in the latter part of the passage, you clearly see how the “thee’s,” “thy’s,” and “thou’s” reveal that the pronouns are singular, showing that Simon Peter, as an individual, is being addressed, exclusively.

Now, the NIV, a modern translation. does help you, too, but it adds more words, with “all of you“:

“Simon, Simon, Satan has asked to sift all of you as wheat. But I have prayed for you, Simon, that your faith may not fail. And when you have turned back, strengthen your brothers.” (NIV 2011)

It turns out that the KJV is very consistent, adding a sense of clarity that is missing by default in modern English. When we dropped the “thee’s” and “thou’s” from contemporary English, it really did impoverish us a bit.

See some other examples, such as John 1:50-51, and Acts 13:34. While footnotes and slight rewordings can be helpful in modern versions, it is far from obvious as to how this all works. So, it is nice that the King James Version solves all of this by default.

Therefore, if you are ever tempted to look down upon someone who uses the King James Version, just be mindful that when it comes to the singular/plural second person pronoun distinction, the old KJV generally has the modern translations beat, even if the language is archaic.

The blogger referenced from this link may exaggerate a bit by calling some of these “KJV errors,” but the larger point is that there were times where the KJV translators made what appear to be anachronistic choices, regarding some Bible passages, that can easily mislead contemporary readers. Having a modern translation handy, helps to correct misunderstandings that are difficult to avoid when reading the KJV on its own.

Clarke Morledge -- Computer Network Engineer, College of William and Mary... I hiked the Mount of the Holy Cross, one of the famous Colorado Fourteeners, with some friends in July, 2012. My buddy, Mike Scott, snapped this photo of me on the summit. END_OF_DOCUMENT_TOKEN_TO_BE_REPLACED
This entry was posted on Thursday, December 6th, 2018 at 6:00 pm and tagged with bible translations, kjv and posted in Topics. You can follow any responses to this entry through the RSS 2.0 feed.
« A Fake-News Jesus? Why “Jesus Myth-ers” Should Take a Trip to Rome … (for Christmas)
Does N. T. Wright Deny Penal Substitutionary Atonement?? »

One response to “Why Keep the King James Version? (… Or Why the “Thee’s” and “Thou’s” Are More Important Than You Think)”