A Fake-News Jesus? Why “Jesus Myth-ers” Should Take a Trip to Rome … (for Christmas)

After Thanksgiving, I was greeted by the following Tweet message being passed around from Harvard psychologist, Steven Pinker:

Pinker is a brilliant cognitive psychologist, linguist, and popular science author, but apparently he needs some help with his history. This new book by R. G. Price is hoping to popularize the notion of “Jesus Mythicism,” namely that Jesus of Nazareth never existed. Perhaps such “Jesus Myth-ers” should consider taking a trip to Rome, and dig a little through history.

This idea that Jesus never existed has really taken off over the past few years, picking up a lot of intrigued interest among atheists, that apparently now includes Steven Pinker, even as early as two years ago!  If professor Pinker has no opportunity to go to Rome anytime soon, say in time for Christmas, he might want to consider reading material from Tim O’Neill, a fellow atheist, who gets his history right, as discussed months ago here at Veracity. The details are too much to go into here, but O’Neill’s series on “Jesus Mythicism” is simply fantastic, where he basically argues that “Jesus Mythicism” is roughly the atheist equivalent of the belief in a “Flat Earth,” being promoted by some conservative Christians.

I guess we all have our embarrassing, crazy family members to deal with at holiday family gatherings.

But why is Rome important when it comes to talking about “Jesus Mythicism?” (… and why Christmas?)

Price’s self-published book is a revisionist reading of the Gospels, but “Jesus Myth-ers” more commonly make a different, yet just as historically convoluted, argument. Long time Veracity readers would know that those who promote “Jesus Mythicism” often say that Christianity stole much of its belief system from the Roman cult of worshipping Mithras, popular among Roman soldiers during the first centuries of the Christian era. For example, “Jesus Myth-ers” typically contend that the Christian claim, of Jesus being “born of a virgin,” at Christmas, was actually taken from the Mithraic religion, which supposedly claimed that Mithras was also “born of a virgin,” on December 25th.

Tim O’Neill has a great (yet long) post about the cult of Mithras, that should effectively dismantle such spurious claims (O’Neill has another great post that critiques R. G. Price’s own, even more peculiar version of “Jesus Mythicism,” that does not address the Mithras religion). The evidence to support the claim, that Mithras was “born of a virgin” on December 25th, is either non-existent or terribly “stupid” at best (“stupid” is how Price’s “fellow” atheist, Tim O’Neill, describes it!).

So, when my wife and I had the opportunity to go visit Rome earlier this year, I was determined to find out more about Mithras myself…. just to make sure.

The Mithras cult was a big deal in ancient Rome, and there are several places in Rome where archaeologists have found Mithraic temples buried well below buildings from the later Christian era. The closest modern equivalent to Mithraism might be the Masonic movement. Imagine a fraternity of like-minded, Roman soldiers coming together to perform sacred rituals, with all of their secret handshakes, and whatnot.

It helps to have an idea of what Mithras looked like. I was able to get this snapshot below of Mithras stabbing the cosmic bull, at the Vatican Museums. It was hard to get a good, front-on shot, due to the crowds, but this is what I saw: That is a dagger in his right hand, being thrust into the right shoulder side of the bull: 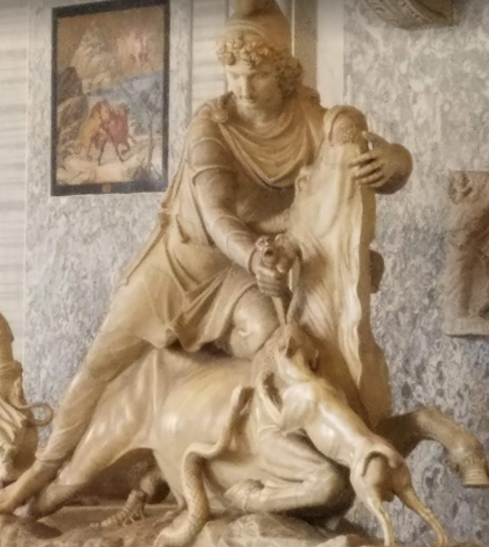 Tours to see the archaeological remains of these Mithraic temples were hard to get, as the spaces to get into these underground areas were pretty tight. Thankfully, we were able to go to the Basilica of San Clemente, a church in the Lateran part of Rome, which has a unique, multi-layered architecture. At the main entrance (see photo below), of the church, you enter the main sanctuary, built in the 11th century. 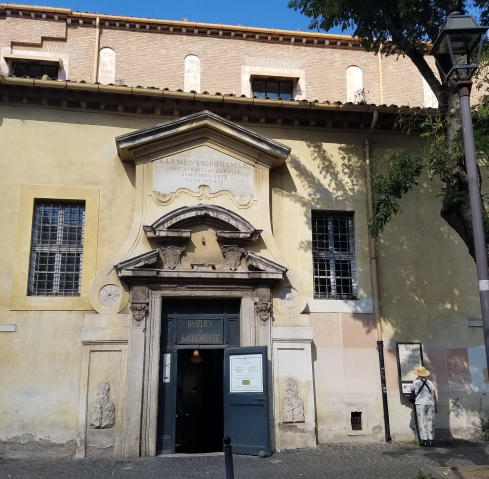 Entrance to the Basilica of San Clemente, in Rome, Italy (my wife has her back to me, as she is reading the entrance sign to the far right of the door).

From the sanctuary, I was able to walk to the church’s courtyard to get a better outside look, facing the entrance to the sanctuary:

Basilica of San Clemente courtyard, on a beautiful day in Rome (October, 2018)

Below that level is a 4th century church, which itself was built out of a home temporarily used for Christian worship, dating back to the 1st century. In the basement of this home, was a Mithraic temple, that was in use briefly in the 2nd century A.D.

Apparently, the Christians were here in this house first, before the Mithras worshippers got to the basement. The docent we had was pursuing graduate studies in Italian history, and she was a wealth of information about all things Mithras. Not one word about the supposed parallels between Christianity and Mithraism came up. We were not allowed to take photographs inside the church or underground, but this photo comes from the guidebook you can buy from the church’s bookstore:

Basement Mithraic temple, underneath the Basilica of San Clemente (from the church guidebook). Note the relief image of Mithras stabbing the cosmic bull, on the altar.

Once you do a little “digging” (pun intended!), you get the idea that far from being a copycat faith that stole from Mithraism, Christianity is actually quite different. Neither Mithraism nor Christianity lines up anything like what the “Jesus Myth-ers” imagine them to be.

Sure, the fact that Mithraism and Christianity are very different, does not necessarily mean that Christianity is true. A strong consensus of scholars is convinced that Jesus indeed did exist, even if many of these scholars reject the idea of God becoming Incarnate at Christmas. There are atheists, like Stephen Pinker, R. G. Price, and the more historically astute, Tim O’Neill, who do not “buy into” the Christian claim of Jesus being risen from the dead. I pray that God might touch their hearts and minds in a manner that they might see the Risen Jesus clearly.

But at the very least, the trip to Rome that my wife and I took helps to confirm that when someone says “Merry Christmas,” it is not just a clever way of saying “Merry Mithras” instead.

Listen to Nick Peters’ Deeper Water’s apologetics podcast, where Nick interviews Tim O’Neill discussing Jesus’ Mythicism. Tim O’Neill wrote a short review of Steven Pinker’s 2011 best-selling book, Better Angels of Our Nature, that should cause any Pinker enthusiast to pause. Steven Pinker and Nick Spencer debate one another, on the Unbelievable podcast, hosted by Justin Brierley, earlier in 2018, on the topic, “Have Science, Reason and Humanism Replaced Faith? (Youtube)” New Testament scholar N.T. Wright responds to Steven Pinker’s claim, that human rights were not derived from Christianity (Youtube).

Clarke Morledge -- Computer Network Engineer, College of William and Mary... I hiked the Mount of the Holy Cross, one of the famous Colorado Fourteeners, with some friends in July, 2012. My buddy, Mike Scott, snapped this photo of me on the summit. END_OF_DOCUMENT_TOKEN_TO_BE_REPLACED
This entry was posted on Saturday, December 1st, 2018 at 7:00 pm and tagged with Christmas, Jesus Mythicism, Mithras, Rome and posted in Apologetics. You can follow any responses to this entry through the RSS 2.0 feed.
« Is Belief Always a Prerequisite for Baptism?
Why Keep the King James Version? (… Or Why the “Thee’s” and “Thou’s” Are More Important Than You Think) »

One response to “A Fake-News Jesus? Why “Jesus Myth-ers” Should Take a Trip to Rome … (for Christmas)”