Clarke’s Books of 2016… and a Quick Year in Review 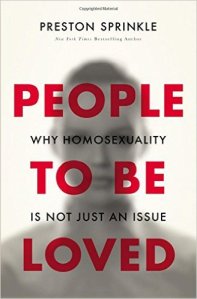 People To Be Loved: Why Homosexuality is Not Just an Issue, by Preston Sprinkle. My book of the year for 2016.

Christians are people of the “Word,” so it really is a good thing for Christians to practice the discipline of good reading. However, I do not get a chance to read as much as I would like to do. Thankfully, Audible.com and ChristianAudio.com supplement my hunger for good books, as I commute to work or try to knock out my “honey-do” list at home on Saturdays. So, I would like to offer a brief review of some of the books that have helped shape me over the past year (also, I have a quick year in review below):

People to Be Loved: Why Homosexuality is Not Just an Issue, Preston Sprinkle. The best book I have read this year on a controversial topic, and probably the best book ever on this particular topic. Sprinkle has the right combination of pastoral sensitivity to hurting people and an orthodox reading of Scripture, that I simply have not found in other books on same-sex attraction and same-sex marriage. If you care about people who struggle with gay and lesbian questions, or you struggle yourself, you need to read this book. I introduced the book here on Veracity.

When a Jew Rules the World, Joel Richardson. As with the topic of creation, I find that an obsessive preoccupation with the “End Times,” including the topic of national Israel, tends to invite a type of unnecessary dogmatism that preemptively shuts down conversation among Christians, where there is honest, principled disagreement regarding the interpretation of the Bible. Richardson’s book is a spirited defense of premillennialism, written at a popular level, with a definite future for national, ethnic Israel in view.  But Richardson does not fit the caricature of dispensationalism I learned some years ago in college, that sees itself as the one and only way to read the Bible. He shook my categories! Richardson has his convictions, but he seems willing to rethink certain elements of popular prophecy that do not have sufficient Biblical backing in his view. I am not wholly convinced by Richardson, in how he reads certain passages of Scripture, he is more obsessive about the “End Times” than I think is necessary, and he goes a bit over-the-top in linking amillennialism with antisemitism in church history. Nevertheless, I confess that he has given me a lot to think about, and he has encouraged me to keep a more open mind. I will hopefully get back to blogging on the topic of Christian Zionism in 2017. Look here for a detailed review I wrote on Veracity.

We Belong to the Land, Elias Chacour. Chacour is a Palestinian Christian in Israel, and nominee for the Nobel Peace Prize several times, who for the past fifty years has sought for justice and reconciliation between Palestinian Christians and non-Christian Israelis. This is a fairly brief book, composed mostly of short essays chronicling Chacour’s story since the 1960s. But it helps to give a different Christian perspective to the Middle East conflict, that most American Christians know next to nothing about. Chacour was instrumental in building schools for Palestinian Christian children, at a time when many Israelis resisted such efforts. If you are bothered by Joel Richardson, read Elias Chacour for an antidote.

The Fall of the Ottomans: The Great War in the Middle East, Eugene Rogan. I have become friends with some guys from Turkey, and I have wanted to learn more about World War One, and the Middle East. If you want to understand what is going on in that part of the world today, including some of the history behind the Israeli-Palestinian conflict, this British historian, Eugene Rogan, is a fascinating and yet still scholarly story teller, of how that part of the world has gotten into the mess that it is in right now.

NIV Cultural Backgrounds Study Bible: Bringing to Life the Ancient World of Scripture, John Walton and Craig Keener. An excellent resource that I use almost all of the time now in studying the Bible. A lot of popular Bible teaching today fails to properly appreciate the original context of the Biblical writer and the original audience. As John Walton succinctly puts it, “The Bible was written for us but not to us.” If you use this alongside a good study Bible, it will give you a lifetime of insight into understanding God’s Word. It serves as the perfect complement to my ESV Study Bible.

The Grammar of God: A Journey into the Words and Worlds of the Bible, Aviya Kushner. Written by an orthodox Jew, Kushner writes about the fascinating world of Bible translation, from the perspective of someone who grew up reading the Bible in Hebrew. She intersperses her discussion of different passages of the Hebrew Bible with a colorful and personal travelogue of sorts. Though not a Christian, I learned a lot about some of the ambiguities in Bible translation from Kushner, which ironically gave me a greater appreciation for God’s Word, the Bible. Some of Kushner’s family survived the Holocaust, making the story even more compelling.

When God Spoke Greek: The Septuagint and the Making of the Christian Bible, by Timothy Michael Law. In preparing a Bible study in Romans for both a small group Bible study and an Adult Bible class, I soon learned that the Old Testament Scripture quotations Paul makes in his letter do not always match the text we have in our English Old Testament translations. When God Spoke Greek opened my eyes to understanding the crucial role that the Greek Septuagint, that the Apostle used, has in helping us to understand things like Biblical inspiration. They did not teach me this stuff in seminary, but they should have. It was like a mini-revolution in how I looked at the Bible. It also helped me to see why some evangelicals have been drawn towards Eastern Orthodoxy, but that is another subject! See this review on Veracity.

Here I Stand: A Life of Martin Luther, Ronald Bainton. A classic that every Christian should read, particularly since we will celebrate the 500th anniversary of the Protestant Reformation next year

And to top things off, here is a quick review of the year 2016 for me. Last year, I put up a “Top Posts of the Year 2015,” but I only have a few things to add for this year, so this is why I focus mainly on the books I have read.

Of course, the biggest story of the year is the 2016 American Presidential election. Many Christians are optimistic, whereas others are apprehensive. I do not think anyone really knows yet for sure what it all means. I guess we will all start to know something within a few months. Here are just a few of the other notable, thoughtful events and Internet postings of 2016 that quickly come to mind:

Clarke Morledge -- Computer Network Engineer, College of William and Mary... I hiked the Mount of the Holy Cross, one of the famous Colorado Fourteeners, with some friends in July, 2012. My buddy, Mike Scott, snapped this photo of me on the summit. END_OF_DOCUMENT_TOKEN_TO_BE_REPLACED
This entry was posted on Saturday, December 31st, 2016 at 10:49 am and tagged with books and posted in Topics. You can follow any responses to this entry through the RSS 2.0 feed.
« Andy Stanley, and Critics Who Shoot First, and Ask Questions Later
Huston Smith and the Doctrine of Religious Pluralistic Experimentalism »