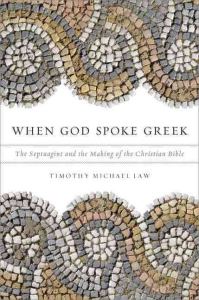 When God Spoke Greek: The Septuagint and the Making of the Christian Bible.

When I first started to read the Bible as a young Christian, I bought myself a study Bible. As I was reading the New Testament, I would run across quotations of the Old Testament. I rarely took the time to go back and read the various Old Testament references. But for the past two years, I have taken a “deep dive” into the Book of Romans, so I decided to look up some of those cross-references…finally. What I found at first surprised me, then it bothered me, and then it captivated me.

Are these typos in our Bibles?  Apparently not.

Not sure if you believe me? Come take a little trip with me into the Book of Romans, and I can show you…

For example, in Romans 2:24, the Apostle Paul is telling the church in Rome that the hypocrisy of the Jews who fail to keep the Law has brought disrepute upon the Lord among non-Jewish people:

As it is written: “God’s name is blasphemed among the Gentiles because of you (NIV 2011).”

The cross-reference is back to Isaiah 52:5. Here is the last part of the verse in Isaiah, from the New International Version, which translates the Old Testament primarily from the “original” Hebrew, based on the classic Masoretic text tradition, still in use today by Orthodox Jews:

“And all day long my name is constantly blasphemed (NIV).”

Now, it is quite possible that the Apostle Paul simply combined Isaiah 52:5 with an allusion to Ezekiel 36:20-22, as some Bible commentaries argue. True. But the early church, including Paul, primarily used a Greek translation of the Old Testament for their Bible, a translation that many Eastern Orthodox Christians still use today. When you read the same Isaiah 52:5 passage from this Greek Bible translation, otherwise known as the Septuagint, often abbreviated in the notes of popular study Bibles as LXX,  I found something quite shocking:

“On account of you my name is continually blasphemed among the Gentiles (Brenton translation of Septuagint).”

Why Christians Should Know More About the Septuagint

I recently finished Timothy Michael Law’s When God Spoke Greek, listening to it from Audible.com. Law does a great job explaining why Paul appears to be using the Septuagint in his quotations from the Old Testament in the Book of Romans. In fact, Paul quotes the Septuagint… A LOT.

Now, this is what initially bothered me: If the Bible is inspired in the original writings, why would Paul not stick with quoting the original Hebrew of the Old Testament to make his point? As a young Christian, I was always told that the Septuagint was merely a translation of the Hebrew, an inaccurate one that takes certain liberties that are not to be found within the “original” Masoretic text used by the Jews. Greek speaking Jews used the Septuagint for years, including the early Jewish and Gentile Christians. But by about the early medieval period, Jewish communities gave up on the Septuagint and focused their attention on using the Hebrew texts as being authoritative. The Masoretes were Jewish scholars who sought to preserve those Hebrew texts for hundreds of years, so they gave us the Masoretic texts that are still used today.

Most Bible translations today follow that rule established by Jewish tradition, leaning heavily on the Hebrew Masoretic text for translating the Old Testament into our modern languages. So, why would Paul resort to using a Greek translation, and embedding that translation within our inspired New Testament, instead of appealing directly to the ancient Hebrew? Why is the inspired Apostle Paul “breaking the rule?”

Reading Law’s book helps to answer these type of questions. The fascinating thing about it is that the argument presented by Law actually makes a lot of sense. Law suggests that the low reputation of the Septuagint is undeserving. The Septuagint, which effectively acted as “the Bible” for the early Christians like Paul, was the perfect vehicle for the apostle to use to relate New Testament truth to his Greek-speaking audience, including both Jews and Gentiles. As Law argues, it is quite possible that the Septuagint, at least in a number of places, could actually be based on an earlier version of the Hebrew text, as compared to the Masoretic Hebrew tradition that stands as the basis for our modern Old Testament translations.

I got over my sense of being “bothered” by this observation. While a number of possible explanations can be entertained to explain the relationship between the Septuagint and the Masoretic textual tradition, I concluded that it really is not up to me to decide how God would write His inspired Bible. If God wanted the Apostle Paul to use the Septuagint Greek translation to communicate His truth, then I simply need to accept that, and then try to understand what can be learned by what God has done here. At this point in my study of the Bible, I am captivated by how God would use the Septuagint to accomplish His purposes.

As it turns out, Paul is not the only one in the New Testament who makes an appeal to the Septuagint, or at least a Septuagint-like reading of the Old Testament.  Matthew’s prophecy of the virgin birth uses the prophet Isaiah much the same way. The book of Hebrews quotes from the Septuagint all of the time. I drew out some other extended observations about the Septuagint in this earlier Veracity post, when I first became aware of Law’s book.

I am surely no expert in the Old Testament, but it seems to me that the old idea that the Septuagint should have some “inferior” status within the church, simply because it is a translation, and not in Hebrew, needs to be seriously rethought by Christians today.

Nevertheless, When God Spoke Greek has its critics. Several of the reviews criticize Law for possibly making too much of the differences between the Septuagint and the Masoretic Hebrew text, as well as setting up a false dichotomy between “scripture” and “canon” in the early church era.  These criticisms are appropriate to consider. But as in this interview in FirstThings, despite whatever problems there are with Law’s argument, the narrative history that Michael Timothy Law tells is quite engaging, accessible, and eye-opening.

When God Spoke Greek is meaty, so it was a bit hard listening to it in Audible audiobook format. I always wanted to stop the car while I was driving, pull over, and look up the Bible verses myself. Nevertheless, just listening to the story Law tells is fascinating for a “Bible nerd” like me. If you have been a reader of the New Testament for awhile and are puzzled over the differences in Old Testament quotations, you will learn that the book addresses these concerns without going over your head. You do not need to be a Bible scholar to enjoy this book, but it sure helps to have a curiosity of what makes the Bible “the Bible.”

Clarke Morledge -- Computer Network Engineer, College of William and Mary... I hiked the Mount of the Holy Cross, one of the famous Colorado Fourteeners, with some friends in July, 2012. My buddy, Mike Scott, snapped this photo of me on the summit. END_OF_DOCUMENT_TOKEN_TO_BE_REPLACED
This entry was posted on Friday, June 3rd, 2016 at 5:11 pm and tagged with Romans, Septuagint and posted in Apostle Paul. You can follow any responses to this entry through the RSS 2.0 feed.
« Who is a “True” Jew?
The Wrong Jesus for the Right Young Graduate »