Why Liberal Christianity is a Dead End 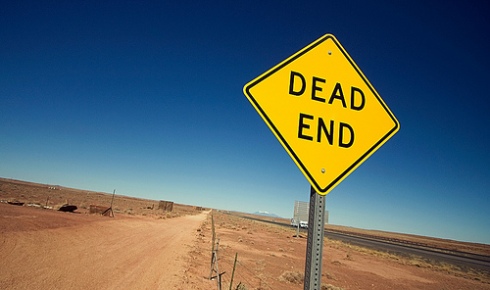 I appeal to you, brothers, to watch out for those who cause divisions and create obstacles contrary to the doctrine that you have been taught; avoid them. (Roman 16:17)

Back when I was in high school, I was a member of a “service club.” The service club provided assistance to the poor, cared for the needy, and fought hunger in our community. This was great stuff.

But to my knowledge, this group had no spiritual component to it. It appeared to function well without spirituality, so what was the point of mixing “God” up into the whole business?

So it was a really strange thing, when my church youth group back then decided that they wanted to become like this “service club.” The church group would no longer study the Bible or talk about Jesus. They wanted instead to focus on social service work, just like my service club.

My time was valuable, and so I simply could not justify being a member of two social service clubs that were doing the exact same thing. So I left the church group. If there was nothing distinctively “Christian” going on in the church group, what was the point?

I ran into a long time friend of mine this week at the hardware store, and this person had a similar story to tell me. My friend had started working for a church a few years ago, in a ministry that was doing great work caring for a needy group of folks in our community. But just recently, some of my friend’s colleagues in the ministry were offended by my friend’s sharing of “Jesus” as “the Son of God” with recipients of the church’s ministry. As the story unfolded, it turns out the church had also recently hired some people to work in the ministry, who did not believe in the classic doctrine of the Triune nature of God: Father, Son and Holy Spirit.  To deal with the division, my friend was asked by the church staff not to talk about “Jesus” anymore.

Keep in mind, this is not a government agency or a school we are talking about. This is a church.

“We have a vision statement that you can look at.”

“No, I want to see the statement of faith.”

Sadly, the church had no statement of faith. After my conversation, I checked the church’s website. And sure enough, there was not a single statement online as to what the church believed.

When a church begins to drift away from the “doctrine that you have been taught,” as the Apostle Paul puts it, what typically goes with it is the church’s statement of faith. I know that historically, the denomination associated with this church has for several hundred years taught the doctrine of the Triune nature of God. But like a lot of churches that tend to identify with “liberal Christianity,” communities like these put Bible doctrine off to the side. Instead, these churches put their focus on social type of ministries. These social ministries do great things for our community. These efforts must be commended.

But in the long run, the mission of such a church leads to a dead end. It becomes extremely difficult to “watch out for those who cause divisions and create obstacles,” when your community lacks a clear understanding of what is being taught. Sadly, “liberal Christianity” provides no moral or spiritual basis for why it is doing its work.

My friend learned a valuable lesson. Check out the church’s statement of faith before you sign up for the job. But my friend’s story is far from unique. It happens over and over again, hundreds of times in liberal churches across the globe. The Pew Research Center published a report last year, showing that Protestant mainline churches, which constitutes the bulk of “liberal Christianity,” is continuing to rapidly shrink year after year in America, with no sign of reversing.

Liberal Christianity is ultimately a dead end because there is effectively nothing different in this movement than what you would find in fully functioning social service clubs and organizations elsewhere in the community that make no mention of God. What is the point of a church disposing the “doctrine that you have been taught,” only to replicate what the rest of the world is doing? It just causes divisions and creates obstacles.

It is a dead end.

Clarke Morledge -- Computer Network Engineer, College of William and Mary... I hiked the Mount of the Holy Cross, one of the famous Colorado Fourteeners, with some friends in July, 2012. My buddy, Mike Scott, snapped this photo of me on the summit. END_OF_DOCUMENT_TOKEN_TO_BE_REPLACED
This entry was posted on Sunday, May 15th, 2016 at 10:42 am and tagged with liberal christianity, Romans and posted in Topics. You can follow any responses to this entry through the RSS 2.0 feed.
« Hugh Ross
On Disputable Matters »