In 1974, when Colbert was 10, his father, a doctor, and his brothers Peter and Paul, the two closest to him in age, died in a plane crash while flying to a prep school in New England. “There’s a common explanation that profound sadness leads to someone’s becoming a comedian, but I’m not sure that’s a proven equation in my case,” he told me. “I’m not bitter about what happened to me as a child, and my mother was instrumental in keeping me from being so.” He added, in a tone so humble and sincere that his character would never have used it: “She taught me to be grateful for my life regardless of what that entailed, and that’s directly related to the image of Christ on the cross and the example of sacrifice that he gave us. What she taught me is that the deliverance God offers you from pain is not no pain — it’s that the pain is actually a gift. What’s the option? God doesn’t really give you another choice.”

Charles McGrath, “How Many Stephen Colberts Are There?” (New York Times, January 4, 2012)

In Clarke’s post on today’s most influential skeptics, he listed Richard Dawkins, Bill Nye, Neil deGrasse Tyson, Bart Ehrman and Bill Maher as models of certain types of skepticism. All of them have wide spheres of influence gained through publishing and/or media exposure. Three of them have hosted their own television shows. All of them are intelligent, most are witty, and some have intellectual adversaries. But before we see how Daniel B. Wallace refutes the theories of Bart Ehrman, or how William Lane Craig can give Richard Dawkins a dressing down, let’s see what Stephen Colbert can do with them.

Huh? Stephen Colbert? Really? Okay…cards on the table—I’ve never watched the Colbert Report, probably because sarcasm has never been one of my favorite flavors. But in looking for online material about today’s most influential skeptics, I tripped across several Stephen Colbert video interviews where he took on these very skeptics. Colbert’s comedy can go blue in an instant, and his language at times is inappropriate for genteel company, but his wit is undeniably sharp. And as you may infer from the New York Times excerpt at the beginning of this post, there is a lot more going on with Stephen Colbert than his on-air persona might indicate.

Anyway, here are some cleverly complex interviews where Colbert takes on the skeptics. There is real tradecraft here—he confronts the skeptics boldly without humiliating them. Most of these guests show up for multiple appearances (he interviewed Richard Dawkins and Bart Ehrman twice, and Neil deGrasse Tyson nine times). Some of his quips poke fun at shallow arguments for the very epistemology Colbert seeks to support, while demonstrating an insightful appreciation for apologetic arguments and contemporary skepticism. As W.C. Fields once quipped, “Comedy is serious business.” (Click through to start the video clips, and sensitive ears may want to opt out at this point.) 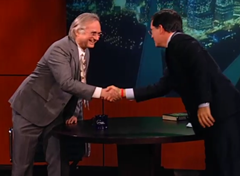 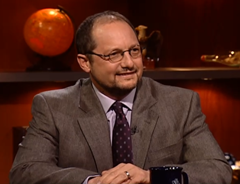 This blog is topical and devotional--we post whatever interests us, whenever. If you want to follow in an orderly fashion, please see our Kaqexeß page. END_OF_DOCUMENT_TOKEN_TO_BE_REPLACED
This entry was posted on Tuesday, February 17th, 2015 at 12:03 pm and tagged with Bart Ehrman, Personal Discipleship, Richard Dawkins, Skepticism, Stephen Colbert, veracity and posted in Apologetics. You can follow any responses to this entry through the RSS 2.0 feed.
« Why Study the Skeptics?
What is Lent? »