Were Adam and Eve Vegetarians?

Did God forbid Adam and Eve to include hamburger in their diet?

Many vegetarians and vegans would agree with that. But an even broader group of Christians today believe that Adam and Eve’s restricted diet demonstrates that there was no animal death before Adam and Eve sinned in the Garden. Young Earth Creationists, whether they be vegetarians themselves or not, claim that in God’s good Creation there would be no animal suffering or death. This all changed once Adam and Eve fell from God’s grace. It was not until the time of Noah and the Great Flood that humans were finally allowed to expand their diet to include the eating of meat.

But Adam and Eve were not the only ones required to have such a restricted diet. Visitors at the Creation Museum in Kentucky have at times taken a photo of a sign that asks, “What did dinosaurs eat?” Unlike what you see in all of those Jurassic Park movies, T-Rex would not have been a carnivorous, meat-eater. Instead, he would have feasted primarily on perhaps flowering plants. 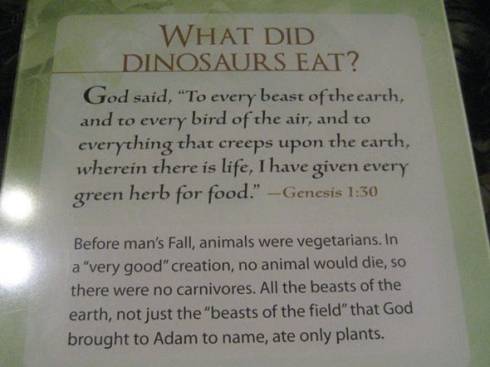 No Animal Death and Suffering Before the Fall: Rationale for Adam and Eve’s Vegetarianism?

After all, it really is hard for many to imagine how God could create the animal world, and then allow for animal death and suffering to exist, and still call such a creation “good.” It is reasonable to conclude that God’s good plan for the redemption of humanity would also include a solution for the suffering experienced in the created world of the animals.  As the Apostle Paul tells us:

For the creation waits with eager longing for the revealing of the sons of God. For the creation was subjected to futility, not willingly, but because of him who subjected it, in hope that the creation itself will be set free from its bondage to corruption and obtain the freedom of the glory of the children of God. For we know that the whole creation has been groaning together in the pains of childbirth until now (Romans 8:19-22 ESV).

The argument is summarized by Ken Ham, the President of Answers in Genesis, on a rainy Kentucky day by a graveyard:

END_OF_DOCUMENT_TOKEN_TO_BE_REPLACED

John Wesley (1703-1791) and George Whitefield (1714-1770) were the most well-known Christian leaders in the English-speaking world of the 18th century. They struggled with each other regarding some significant points of Christian doctrine, and through their dialogue they introduced the notion of “agreeing to disagree” into Christian discourse.

Sometimes “agreeing to disagree” with fellow believers can be difficult. I know. I have been there. But first, let me give you some historical background…

In 18th century England and America, two of the most celebrated figures were George Whitefield and John Wesley. Whitefield and Wesley would travel up and down the American Eastern seaboard and across the British Isles preaching in the open air. The first “Great Awakening” can largely be attributed to how God used these two men to lead many thousands into a relationship with Jesus Christ, perhaps one of the greatest spiritual revivals in the history of the church.

But Whitefield and Wesley had some rough spots in their relationship with one another. In one important matter, they differed in terms of some significant Christian doctrine. George Whitefield, a Calvinist theologically, believed that when Jesus Christ died on the cross, He died only for the elect who would come to know Christ. If you were not among the predestined elect, Whitefield concluded that the Bible taught that Jesus had not died for you. John Wesley, an Arminian theologically, vehemently rejected this teaching. For Wesley, Jesus Christ died for all of humanity, whether someone received Christ or not. Though these men clearly differed on the extent of Christ’s atoning work on the cross and how that related to predestination, they were united in many more things in terms of doctrine than over that which they were divided.

The prolonged controversy between Whitefield and Wesley was at times very tense. Though I do not recall the reference, my understanding is that John Wesley was the more quarrelsome of the two men. But it is to John Wesley’s credit that eventually when he was asked to deliver a memorial sermon when George Whitefield died, he was extremely charitable to his evangelistic counterpart. In that sermon, Wesley uttered a most memorable phrase:

“There are many doctrines of a less essential nature … In these we may think and let think; we may ‘agree to disagree.’ But, meantime, let us hold fast the essentials…”

Since that remarkable sermon, Christians over the years have recalled Wesley’s words that he at times exchanged with his colleague Whitefield about “agreeing to disagree.” Though these men still had their points of conflict, in the end, they were able to consider each other not as enemies but rather as friends, as brothers in Christ, despite their disputes over some points of doctrine.

It is a lesson that the evangelical church today still needs to hear.
END_OF_DOCUMENT_TOKEN_TO_BE_REPLACED