Atlanta Megachurch pastor Andy Stanley is in trouble again with a number of his fellow evangelical leader friends… or have his “friends” succumbed to a “Shoot First, Ask Questions Later” approach to evaluating his preaching?

Do you “fact check” what you read on social media, or any other source of news and information, particularly when it involves a controversial matter of grave concern?

I had just come back from a Christmas trip to visit family, when I ran across a Patheos blog article with the alarming title, “Andy Stanley: Please Relent or Step Down from Pastoral Ministry.” Mmmm…. Yet another scandal among God’s people? A megachurch pastor gone astray? What embarrassment for the Christian faith is it this time?

In this article, the author compares Andy Stanley, a megachurch pastor in Atlanta, and son of popular Bible-teacher Charles Stanley, with the mid-20th century liberal minister, Henry Emerson Fosdick, and a modern-day prosperity doctrine guru, Joel Osteen. Wow! If you know anything about evangelical theology, these are serious charges to lay against any evangelical pastor.

Andy Stanley’s preaching faux pas, per the Patheos blogger, was taken from an early December 2016 sermon delivered by Andy Stanley, regarding Christmas and the difficulty that many people in our secularized culture today have believing in the Virgin Birth of Jesus. Our scientific world has tested the credibility of such miracles, and so, many wonder if the Virgin Birth is not some type of man-made fiction. In responding to the doubts of many, Stanley was partially quoted in a Washington Post article as saying, “If somebody can predict their own death and resurrection, I’m not all that concerned about how they got into the world.”

What does that mean?

The Patheos blogger I was reading, along with a wide variety of other Internet bloggers and Christian media outlets, since early December, took this to mean that Stanley believes that the Virgin Birth is not an essential matter of Christian faith. Others interpret this by saying that Stanley was “questioning the significance of the virgin birth.” Even the venerable president of Southern Baptist Theological Seminary, Al Mohler, took exception to Stanley’s statement as quoted by the Washington Post, on a recent “The Briefing” podcast (though it should be noted to Dr. Mohler’s credit that he did not name Stanley directly):

“If Jesus was not born of the virgin then the Bible cannot be trusted when it comes to telling us the story of Jesus, and that mistrust cannot be limited to how he came to us in terms of the incarnation. The fact is that biblical Christianity and ultimately the Gospel of Christ cannot survive the denial of the virgin birth. Because without the virgin birth, you end up with a very different Jesus than the fully human, fully divine savior revealed in scripture.”

Now, I agree with folks like Al Mohler that the Virgin Birth is an essential doctrine to Christian faith. It is one of the historic, fundamental beliefs of Christianity, not to mention the entire foundation for the Christmas story. But is it accurate to say or imply that pastor Andy Stanley is now denying the essential doctrine of the Virgin Birth?

Upon reading and hearing these things, I harkened back to another controversy that pastor Andy Stanley had earlier in 2016, a story covered here at Veracity (part #1 and part #2).  In that controversy, Stanley was accused of denying Biblical inerrancy. Yet strangely enough, Stanley made his own defense by appealing to one of Stanley’s teachers and mentors, Norman Geisler, who was glad to offer support for Stanley. Norman Geisler was one of the primary architects behind the Chicago Statement of Biblical Inerrancy, articulated in the 1970s. So, it really is strange to imagine that Andy Stanley, an enthusiastic student of Geisler’s, would find himself accused of denying Biblical inerrancy, then defended by Norman Geisler, and then still be accused by some of his fellow evangelical leaders as being “dangerous.”

It reminds me of something Yogi Berra might have said: It is like “deja vu all over again.” END_OF_DOCUMENT_TOKEN_TO_BE_REPLACED

Is the Virgin Birth Prophecy a Mistranslation? 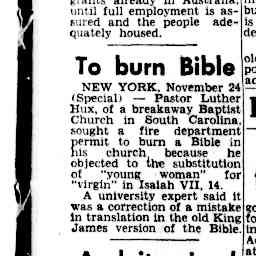 The media coverage of the burning of the RSV, the “Revised Satanic Version” of the Bible. From the November 25, 1952 edition of the Courier Mail, Brisbane, Australia. Luther Hux made quite a news splash all over the world.

“Behold, a virgin shall conceive and bear a son, and his name shall be called Emman′u-el” (Matthew 1:23 RSV)

Therefore the Lord himself will give you a sign. Behold, a young woman shall conceive and bear a son, and shall call his name Imman′u-el. (Isaiah 7:14 RSV)

“Luther Hux knew full well that the RSV was unholy, and accordingly he announced his intention to burn a copy of the new Bible,” so reports historian Peter Johannes Thuessen, from his In Discordance with the Scriptures: American Protestant Battles over Translating the Bible (p.96). Hux, a North Carolina Baptist pastor, had recently received a copy of the new “Revised Standard Version” of the Bible, published that year in 1952. In his fury over what he saw as a “mistranslation” of Isaiah 7:14, Luther Hux was determined to make a show over this “Bible burning” in front of as many press reporters as possible. Isaiah 7:14 is the famous prophecy of the virgin birth, as referenced by the Gospel writer Matthew. All previous English translations of this verse referred to a “virgin,” not a more generic “young woman,” as the new Revised Standard Version had done. Thuessen continues:

On the night of 30 November Hux delivered a two-hour oration and then led his congregation from the white-frame Temple Baptist Church into the cold autumn air, where every member received a small American flag. Climbing onto the bed of a waiting truck, Hux held aloft a copy of the RSV on which he had written the word “fraud.” Instead of burning the whole book, however he ripped out and ignited the page bearing Isaiah 7:14. “This has been the dream of modernists for centuries,” he shouted, ” to make Jesus Christ the son of a bad woman.” (p. 97)

Burning part of a Bible? It would hardly register a blip on the 24-hour news cycle at CNN today. But back in 1950s North Carolina, the “Buckle of the Bible Belt,” you just did not do things like that.

Well, at least he was being patriotic about it.

But what if Luther Hux was right? Was the Revised Standard Version (RSV) a fraud? Was the RSV, from Hux’s own word’s, “the Master Stroke of Satan?”

I am not approving of “Bible burning,” but actually Luther Hux was onto something. What Hux did not know at the time is that he had stumbled upon an issue that has puzzled Bible scholars now for decades,… if not centuries.
END_OF_DOCUMENT_TOKEN_TO_BE_REPLACED