The year 2020 will be known for many things, notably the coronavirus pandemic. But it will also be known for “Black Lives Matter” protests, all over world, not just the United States. Why all of the protests?

For an explanation, one could point to a number of essays, books, blog posts and Twitter tweets, chronicling the history of racism, and the sad story of how the Christian church has been complicit in furthering problems related to skin color. Christians in my generation and older think of Martin Luther King Jr. (MLK), and his efforts to try to get the white church involved in overcoming racism.

The amount of literature on these type of topics is staggering. Many of these sources of information are insightful and helpful. A number of other sources are not. So, I was looking for a resource written by a seasoned veteran in the black struggle, who might have wisdom gained over the years, to give some necessary perspective, in our present day and age. What does it mean to carry on MLK’s legacy, in the first half of the 21st century? 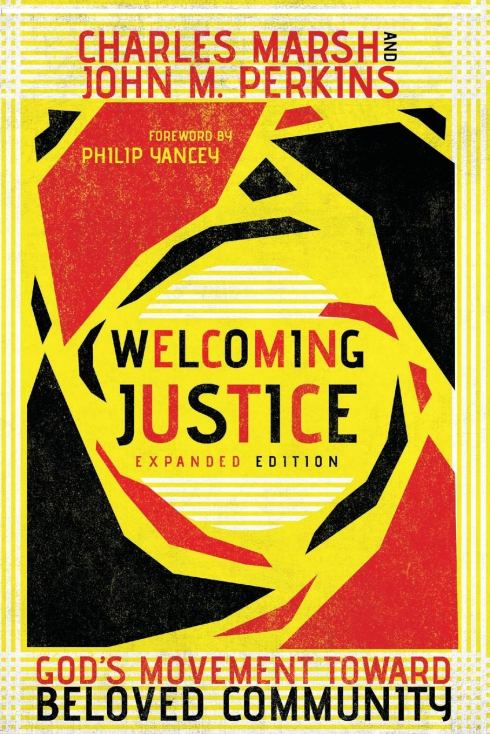 When I saw Welcoming Justice: God’s Movement Toward Beloved Community, co-written by John M. Perkins, I knew I had found the book I needed to read. It was the perfect book to read during Black History Month. An African American, Perkins came to Christ in the late 1950s at age 27, and then founded a Bible institute in his home state of Mississippi. Perkins was almost beaten to death by white police officers in 1970, an experience which gave him a deeper and renewed vision for his ministry calling.

Perkins framed this as the “three R’s”: relocation, redistribution, and reconciliation, all fundamentally grounded in the life of the church. His work in Bible teaching soon grew to address social issues in racially divided Mississippi, and the ministry grew as Perkins and his wife moved to California. His first book in 1976, Let Justice Roll Down, established him as a leading voice in evangelicalism, calling his fellow evangelical believers to expand ministry efforts towards racial reconciliation, instead of focusing narrowly on saving souls. At age 90 now, Perkins has the breadth of insight to give to a new generation of Christians, who struggle with how to best continue this type of reconciliation work.

Co-author Charles Marsh, lives in Charlottesville, Virginia, where America’s racial divide was on full display just a few years ago, nearly 50 years following MLK’s death. Those events in Charlottesville prompted an expanded reprint of this book. Both Perkins and Marsh offer a summary of insights, gained from years of ministry and writing on the topic of racism. Marsh, a scholar of the life of German 20th century theologian, Dietrich Bonhoeffer, and a white Baptist, is a generation younger than Perkins. Perkins mentored Marsh, and the debt owed to Perkins’ experience and wisdom clearly shows in Welcoming Justice. Both Marsh and Perkins are convinced that the greatest strength of the movement towards racial reconciliation is to be found in the roots of the Christian church. Whenever efforts to combat racism have failed, they have failed because they have lost the Civil Rights movement’s original vision rooted in the Christian faith.

Sadly, much of the movement to combat racism today has indeed left the church. Yet without that spiritual vision, today’s efforts to deal with racism have often exacerbated the problems instead of providing sustainable solutions. MLK’s vision of a colorblind society is being replaced with a philosophy of antiracism, which makes practically everything an issue of race. Just meditate on the thought of John McWhorter, a professor of linguistics at Columbia University, and leading African American intellectual today, who warns that 21st century antiracism is becoming a greater threat to society, more so than the 20th century racism, that to a certain degree still plagues us.

Through a series of anecdotes covering the decades following World War 2, Welcoming Justice is a renewed call for the church to reclaim a biblical vision for racial reconciliation, one founded on the idea of a colorblind church. There is still much work to be done to expunge the sin of racism from our society (not just the church), but Perkins and Marsh give us encouragement for the task that still lies ahead. This is not a doctrinally rigorous book, but it does not intend to lay out precise and detailed theology. It does not seek to address some of the larger cultural problems associated with the secular rise of critical race theory and wokeness, that divides Christians today. But it does challenge Christians to engage in God’s program, to bring about reconciliation among persons of different skin color. A fairly short series of essays, Welcoming Justice communicates a vision for the beloved community, that seeks to carry on Martin Luther King Jr.’s dream.

For more on what the Bible actually teaches about racism, please read this previous Veracity blog post. For more on Martin Luther King, Jr., look up these previous blog posts (#1 and #2) For more on the dangers of critical race theory, read about those topics here and here. If you want to know more about the story of John M. Perkins’ life, here is a biographical film made about him:

Clarke Morledge -- Computer Network Engineer, College of William and Mary... I hiked the Mount of the Holy Cross, one of the famous Colorado Fourteeners, with some friends in July, 2012. My buddy, Mike Scott, snapped this photo of me on the summit. END_OF_DOCUMENT_TOKEN_TO_BE_REPLACED
This entry was posted on Saturday, February 27th, 2021 at 8:00 am and tagged with Charles Marsh, John m Perkins, John McWhorter, racism and posted in Topics. You can follow any responses to this entry through the RSS 2.0 feed.
« NASA Perseverance on Mars! The Most Awesome Thing You’ll See Today!
More QAnon Nonsense: March 4 as Trump’s True Inauguration Day? »

One response to “Welcoming Justice: Carrying on MLK’s Legacy”