I had the privilege of joining the University of Berkeley legal scholar, Phillip E. Johnson, for dinner with some friends, several years ago, before he gave a lecture at our church on Intelligent Design. Johnson, who wrote the 1991 landmark book, Darwin on Trial, died in early November, 2019. Professor Johnson, a gracious and kind gentleman, nevertheless puzzled me. Why would Johnson, as a lawyer, spend so much of his intellectual energy, challenging Charles Darwin’s theory of biological evolution? Why would a lawyer bother with biological science?

Johnson had a been a successful legal scholar, rising to the top level of his career, when in his 30’s, his life began to fall apart. His marriage failed, and he felt like he was going nowhere in his academic career. He then became a Christian, he remarried, and he gradually decided to invest his life in something more, something that really mattered.

When he read Richard Dawkins’ The Blind Watchmaker, he was baffled by the logical argumentation employed by Dawkins’ all-encompassing evolutionary worldview. Johnson then made it his mission to understand and expose Dawkins’ logical flaws. In many ways, Phillip E. Johnson was the “godfather” of the contemporary Intelligent Design movement, reinvigorating the late 18th century (early 19th century) Christian apologetics of the British clergyman, William Paley, who first articulated the watchmaker analogy, promoting intelligent design. 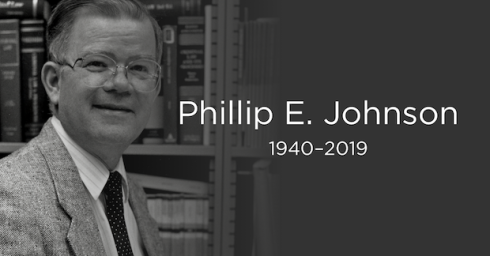 By observing the behavior of the Ichneumonidae group of parasitoid wasps, that devour their hosts alive from the inside out, Charles Darwin had rejected William Paley’s argument: “I cannot persuade myself that a beneficent and omnipotent God would have designedly created the Ichneumonidae with the express intention of their feeding within the living bodies of caterpillars.” Darwin was most well-known for his Origin of Species, but he also extended his arguments in works like his The Descent of Man, suggesting that evolution was an “unguided” and “undirected” process.

Johnson believed that the “unguided” and “undirected” elements of Darwin’s theory had horrific implications that extended beyond the domain of biology. The “purpose-less-ness” advocated by modern defenders of Darwin, like Richard Dawkins, tore at the very fabric of Judeo-Christian culture. Johnson marshaled his legal training against Darwin, combatting against the pro-Darwinian trends within academia.

Johnson’s counter-arguments to Darwin gained sympathy among a growing cadre of intellectuals, including Christians like Michael Behe and Stephen Myers, and many non-Christians as well, including Jonathan Wells, a member of the Unification Church (the Moonies). This eventually encouraged the growth of the Discovery Institute, a think-tank dedicated towards refuting Darwinian evolution. In this sense, Phillip E. Johnson’s “Intelligent Design” movement is not specifically a Christian, biblically-based movement. Technically speaking, the “designer” in “Intelligent Design” need not be the God of the Bible. It could even be some super-intelligent life-form, from the reaches of outer space. Rather, “Intelligent Design” is but one apologetic strategy, that has been used by at least some Christians to defend a Christian, biblical worldview. Yet in many ways, Johnson’s broadly argued case for “Intelligent Design” has been a rallying point, a unifying effort to break the impasse that divides Young Earth Creationists and Old Earth Creationists.

Nevertheless, Johnson’s critique against Charles Darwin has been very controversial, even within the church. For one thing, even atheistic scientists concede that there are a number of elements of Darwin’s theory of evolution that are no longer accepted within the larger scientific community. For example, Darwin knew nothing about genetics. We have Austrian monk Gregor Mendel to thank for giving us the contemporary scientific consensus as to how genes actually work… NOT Darwin.

But among Christians, the controversy over Johnson’s work centers around the definition of that slippery word, “evolution.” By “evolution,” does one actually mean “micro-evolution,” whereby small changes within species happens? Or does one mean “macro-evolution,” with large scale biological changes among plants and animals? What is meant by “directed” or “undirected” evolution?

Most Christians are willing to concede the principle of “micro-evolution.” Yet even the most ardent Young-Earth Creationist will argue that “macro-evolution,” at the level of biological families (though NOT beyond that!), indeed did happen, in a highly accelerated manner, after the global flood of Noah, as a means of explaining the extraordinary biological diversity we see today. Proponents of “Intelligent Design” have fashioned themselves as opponents of “theistic evolution,” despite the claim that Michael Behe, one of “Intelligent Design’s” greatest advocates, is actually a “theistic evolutionist” himself! Christians are all over the map when it comes to defining what they mean by “evolution.”

Phillip Johnson’s efforts to see the Intelligent Design movement expand more into popular education stalled in 2005, when a judge in a Pennsylvania federal court, against the Dover School District, ruled that the teaching of “Intelligent Design” violated the Establishment Clause of the First Amendment to the U.S. Constitution.  But “Intelligent Design” still lives on, as a vital intellectual force, as evidenced by the popularity of such films as Ben Stein’s “Expelled: No Intelligence Allowed.”

Phillip Johnson’s arguments for “Intelligent Design” will surely survive his death. How well they will convince those living in the next generation yet remains to be seen. The larger consensus among academic scientists still rejects “Intelligent Design” as pseudo-science. Some theologians, who possess scientific training, such as Oxford’s Alister McGrath, are concerned that “Intelligent Design” leaves Christian apologetics vulnerable to a type of “God of the Gaps” theology, that does not adequately serve as the best way to defend the Christian faith. Nevertheless, best-selling books by Intelligent Design advocates, such as Stephen C. Myers, continue to be enthusiastically read. All the while, many Young Earth Creationists regard “Intelligent Design” as a halfway attempt to uphold Christianity, that does not go far enough in defending the Bible. I still have lingering questions myself, following my dinner with Phillip E. Johnson, some years ago. Nevertheless, the legacy of Phillip E. Johnson will continue to give many a lot to think about, for years to come.

Clarke Morledge -- Computer Network Engineer, College of William and Mary... I hiked the Mount of the Holy Cross, one of the famous Colorado Fourteeners, with some friends in July, 2012. My buddy, Mike Scott, snapped this photo of me on the summit. END_OF_DOCUMENT_TOKEN_TO_BE_REPLACED
This entry was posted on Sunday, November 10th, 2019 at 8:28 am and tagged with creation, Creationism, Phillip E. Johnson and posted in Witnesses. You can follow any responses to this entry through the RSS 2.0 feed.
« His Dark Materials: The Seductive Power of Atheist Children’s Novels
Dois Rosser, Founder of ICM, Moves Onto Glory »