How the Reformation (Almost) Killed Christmas 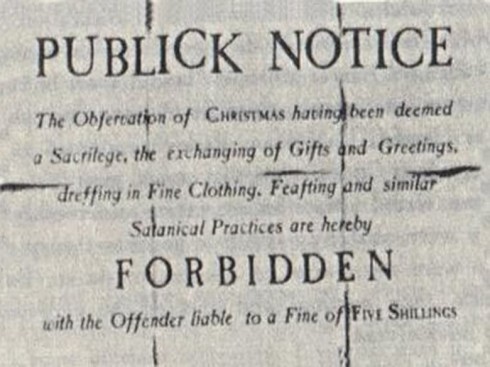 New England Puritans, in 1659, sought to ban Christmas celebrations, as they were thought to be “Satanic practices.” Only the most contrarian Christians are that severe today. How did Christmas win against Puritan opposition?

It was Christmas Day, 1550, in Geneva, Switzerland. A larger than usual crowd gathered at church that day, and the preacher, John Calvin, was rather annoyed.

“Now I see here today more people than I am accustomed to having at the sermon. Why is that? It is Christmas Day. And who told you this? You poor beasts. That is a fitting euphemism for all of you who have come here today to honor Noel.”

Calvin was not exactly trying to be like Charles Dickens’ Scrooge. Instead, he was bothered that so many of his church people were so superstitious, that they thought Christmas to be more important than the weekly Lord’s Day gatherings, held every Sunday. Calvin would be appalled by the contemporary practice of keeping shops open on Sundays, while closing those same shops on Christmas!

Calvin was not alone in his suspicions about Christmas, with some seeking to kill Christmas altogether. From Ulrich Zwingli’s Zurich, Switzerland, to the post-Elizabethan era of English Puritanism, in the early 17th century, many in the Reformation movement sought to abolish all feast and saints holy days… including Christmas.  The Bible gave no command and made no explicit provision for celebrating Christmas, and the Roman Catholic practice of celebrating Christmas was associated with so many superstitious beliefs (kissing under the mistletoe?), that it was better to be rid of all things that even hinted at “ole’ Saint Nick.” Even in colonial America, the Puritan settlers of New England sought to ban Christmas celebrations outright.

On the other hand, the German Reformer, Martin Luther, was one of the holdouts, who liked keeping Christmas traditions. Since the Bible never specifically prohibited Christmas celebrations, he saw no reason to forbid them. Luther gave his children toys and honey cakes on Christmas day. He popularized the Christmas tree. But for the English forebearers of Protestant reform, inspired by those like Geneva’s John Calvin, few Bible preachers and teachers on the British Isles cared that much for Christmas.

It was mainly during the long reign of Elizabeth I, the 16th century “Virgin Queen,” that Christmas managed to hang on, and even flourish, among the Protestant English. Christmas was a festive time at Elizabeth’s court.

Elizabeth I of England (1533-1603). The queen who saved Christmas for English Christians.

Elizabeth was determined to steer a middle course between the traditionalism of Roman Catholicism, which she abhorred, and the exuberant, reform-minded preaching of the Puritans, who wanted to strip the legacy of choral music, candles, and visual arts from the churches. The 1559 Elizabethan Settlement sought to marry Protestant theology with a collection of traditional, Roman Catholic worship practices. Elizabeth’s Protestant, yet not-so-rigid faith, gave space for the continued celebration of Christmas, during the tumult of the 16th century Reformation. Despite the efforts by Puritan partisans, to stamp out Romish traditions, the English populace loved Christmas.

By the late 18th and early 19th centuries, the red hot conflict between Protestantism and Roman Catholicism had finally begun to cool somewhat, and the Elizabethan embrace of Christmas eventually won over even ardently skeptical Bible-believers. The less confessionally-oriented growth of the evangelical movement, started by popular evangelists, like George Whitfield and John Wesley, made it possible once more for enthusiastic Protestants to consider Christmas as a genuinely Christian celebration, among English-speaking peoples. Towards the end of the 19th century, the popularity of English Christmas carols, ranging from “I Heard the Bells on Christmas Day,” to “O Holy Night,” to “Go Tell It on the Mountain,” helped to cement the reception of Christmas among English-speaking Christians.

Christmas did not merely survive. It thrived.

I am very much a child of the Reformation, sola fide, sola gratia, and all of the rest. Yet even though I do get rather burned out on the barrage of Christmas carols on the radio and in shopping malls, by about mid-December, I am nevertheless thankful that the Protestant Reformation did not ultimately succeed in killing off Christmas. In our increasingly secular American society, Christmas is still a festive time of year, where even the most skeptical non-believers are willing to enjoy a Christian celebration. Sure, many have no real understanding of the meaning of Christmas. Yet some are open to discuss spiritual things. Thanks to folks like Martin Luther (for Germans) and Queen Elizabeth I (for the English), the season of Christmas remains a time of year where we can focus on the mystery of God’s incarnate mission and presence on earth, through Jesus Christ.

For a broader look at the “War on Christmas” in history, read this Veracity posting from a few years ago. The above blog post was inspired by reading David Swartz’s post, on the same topic, at the Anxious Bench blog. 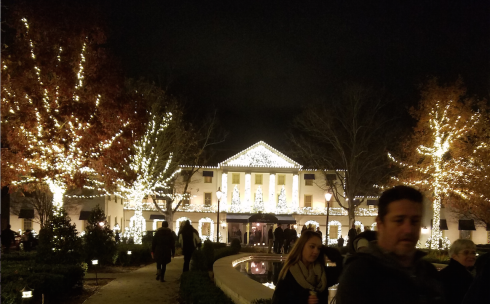 The Williamsburg Inn, at Colonial Williamsburg’s Grand Illumination, 2017, celebrating the coming of the Christ, during the Christmas Advent season.

Clarke Morledge -- Computer Network Engineer, College of William and Mary... I hiked the Mount of the Holy Cross, one of the famous Colorado Fourteeners, with some friends in July, 2012. My buddy, Mike Scott, snapped this photo of me on the summit. END_OF_DOCUMENT_TOKEN_TO_BE_REPLACED
This entry was posted on Friday, December 8th, 2017 at 11:07 pm and tagged with Protestant Reformation, queen elizabeth, reformation and posted in Topics. You can follow any responses to this entry through the RSS 2.0 feed.
« Ravi Zacharias and Christian Integrity
Reformation: R. C. Sproul »