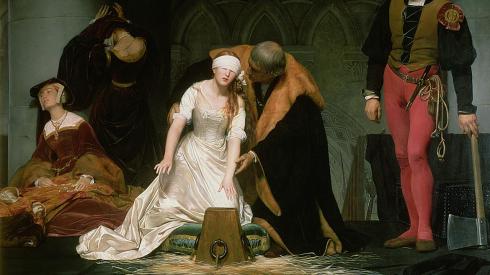 Though the legendary 1833 portrait, by French Romantic artist Paul Delaroche, is somewhat sensationalized, the story of Lady Jane Grey’s execution reveals a young woman with great faith in Christ.

The history of the Reformation was written largely by men, about men. But women often played a crucial role in the spiritual turmoil of 16th century Western Europe. What led to the execution of Lady Jane Grey is one of those stories.

King Henry VIII made it his life goal to obtain a male heir to the English throne. He finally had one son, Edward, who did succeed him. But Edward VI suffered terrible health problems, and he died at age 15, in 1553, after serving as king only since the age of 9.

Anticipating the worst ahead of time, Henry VIII had made provision that his oldest daughter, Mary, would succeed Edward VI, in the event Edward’s illnesses might eventually shorten his life. But young Edward VI had other ideas of his own.

Edward VI had been raised by Protestant tutors, and he firmly held to an evangelical faith. His older half-sister, Mary, was a devoted Catholic. Edward VI did not want England to be ruled by a Catholic queen. He did have a cousin, not too much older than himself, who might be a better fit for Protestant England. Lady Jane Grey had received an education similar to Edward’s, sharing his firm Protestant faith.

Edward’s adult Protestant advisors had steered the Church of England away from Roman Catholicism, in a more Reformed, Protestant direction. Edward feared that Mary would undo these changes, and he had good reason for his fears. He trusted that Lady Jane would keep England on a Protestant course, so he made arrangements for Lady Jane to succeed him, upon his death. 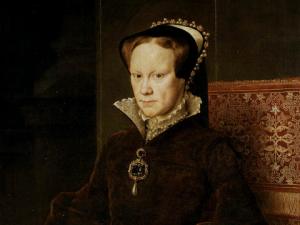 Mary I, Catholic queen of England, who cut short the reign of Lady Jane Grey.

Lady Jane Grey became queen, once Edward die. But the political bickering erupted, and she did not remain queen for long. The young teenage queen had become a pawn in the hands of those who sought great power and influence. Mary, recalling her father’s wishes, asserted her right to become queen. In less than a couple of weeks, Lady Jane Grey had been deposed, and imprisoned in the Tower of London.

However, this is where the story takes on a more spiritual, rather than political, significance. Lady Jane Grey was directly opposed to Mary’s Catholicism. Viewing Lady Jane as a threat, Mary sought to have Lady Jane executed. But in hopes of persuading Lady Jane to disabuse herself of her Protestant ideas, Mary sent her personal chaplain, a man named Fecknam, to go see Lady Jane Grey, to see if she might recant and return to Catholicism. John Foxe, in his Book of Martyrs, recalls the record of the conversation that took place.

Fecknam.–“What is … required of a Christian man?”

Jane.–“That he should believe in God the Father, the Son, and the Holy Ghost, three persons and one God.”

Fecknam.–“What? Is there nothing else to be required or looked for in a Christian, but to believe in him?”

Fecknam.–“Why? then faith justifieth not, nor saveth not.”

Fecknam.–“Why? St. Paul saith, If I have all faith without love, it is nothing.”

Jane.–“True it is; for how can I love him whom I trust not, or how can I trust him whom I love not? Faith and love go both together, and yet love is comprehended in faith.”

When Fecknam quizzed Jane on the subject of the Lord’s Supper, she responded with equal firmness:

Jane. The sacrament of the Lord’s supper, offered unto me, is a sure seal and testimony that I am, by the blood of Christ, which he shed for me on the cross, made partaker of the everlasting kingdom.”

Fecknam.” Why? what do you receive in that sacrament? Do you not receive the very body and blood of Christ?”

Jane.–“No surely, I do not so believe. I think that at the supper I neither receive flesh nor blood, but bread and wine: which bread when it is broken, and the wine when it is drunken, put me in remembrance how that for my sins the body of Christ was broken, and his blood shed on the cross; and with that bread and wine I receive the benefits that come by the breaking of his body, and shedding of his blood, for our sins on the cross.”

Fecknam.–“Why, doth not Christ speak these words, Take, eat, this is my body? Require you any plainer words? Doth he not say, it is his body?”

Jane.–“I grant he saith so; and so he saith, I am the vine, I am the door; but he is never the more for that the door or the vine. Doth not St. Paul say, He calleth things that are not, as though they were? God forbid that I should say, that I eat the very natural body and blood of Christ: for then either I should pluck away my redemption, or else there were two bodies, or two Christs. One body was tormented on the cross, and if they did eat another body, then had he two bodies: or if his body were eaten, then was it not broken upon the cross; or if it were broken upon the cross, it was not eaten of his disciples.”

Fecknam was unable to persuade the 16 year old teenager to reconsider, and finally gave up.

After this, Fecknam took his leave, saying, that he was sorry for her: “For I am sure,” quoth he, “that we two shall never meet.”

Jane.–“True it is,” said she, “that we shall never meet, except God turn your heart; for I am assured, unless you repent and turn to God, you are in an evil case. And I pray God, in the bowels of his mercy, to send you his Holy Spirit; for he hath given you his great gift of utterance, if it pleased him also to open the eyes of your heart.”

Two days later, Lady Jane Grey was led to the scaffold, where she recited Psalm 51. She handed off her prayer book to another person, and then received the blindfold. Unable to see, she was not able to reach out to the executioner’s stone block. Fecknam himself is said to have assisted her, in placing her hands on the block, as she laid her neck upon the stone. The axe ended her life just moments later.

Clarke Morledge -- Computer Network Engineer, College of William and Mary... I hiked the Mount of the Holy Cross, one of the famous Colorado Fourteeners, with some friends in July, 2012. My buddy, Mike Scott, snapped this photo of me on the summit. END_OF_DOCUMENT_TOKEN_TO_BE_REPLACED
This entry was posted on Tuesday, December 5th, 2017 at 6:31 pm and tagged with Bloody Mary, Lady Jane Grey, Protestant Reformation, reformation, women of the Reformation and posted in Witnesses. You can follow any responses to this entry through the RSS 2.0 feed.
« John Calvin and the Servetus Affair
Ravi Zacharias and Christian Integrity »