The Great American Eclipse of 2017 brought a few hundred, enthusiastic observers to a viewing party at the College of William and Mary. I really want to see a total solar eclipse, next time, in 2024!!

Living in Williamsburg, Virginia, I was given the privilege of seeing a partial solar eclipse on August 21, 2017, along with many other Americans. But as several of my friends all said, who made the trek down to South Carolina, to witness the totality of the Great American Eclipse of 2017, the difference between witnessing a partial eclipse versus a total eclipse is tremendous. Some have said it is like the difference between getting a negative report on a pregnancy test versus getting a positive report on a pregnancy test.

Inhabitants of the planet earth have the incredibly unique opportunity to observe perfect solar eclipses, that have enabled the rapid advancement of modern science. In a perfect solar eclipse, like the one that crossed America in August, 2017, the disc of the moon perfectly and exactly covers the disc of the sun in the sky, for just a few minutes. This unique phenomenon led to one of the greatest scientific discoveries, nearly one hundred years ago.

Albert Einstein was a fairly unknown figure, in 1916, when he published his theory of general relativity. The reigning theory of cosmology at the time suggested that there was no beginning to the physical universe, an idea that contradicts the teaching of the Bible, that in the beginning, God created the heavens and the earth (Genesis 1:1). Einstein’s theory would indicate that there indeed was a beginning, and that this made sense scientifically. To prove his theory, Einstein predicted that you could make measurements during a perfect solar eclipse, to demonstrate that the gravitational influence of the sun bends the rays of light emanating from distant stars.

A colleague of mine brought a colander to the eclipse viewing party, where you can make out dozens of crescents from the partial eclipse (click on image to expand, to get a closer look).

In May 1919, British physicist, Sir Arthur Eddington, led an expedition to Brazil to observe a total solar eclipse. Eddington’s observations confirmed that the predictions made by Einstein were 100% correct. Albert Einstein became a household name after that discovery. This eventually led to the contemporary understanding of Big Bang cosmology, with its emphasis on a specific, unique beginning of the universe, in alignment with what the Bible teaches.

This discovery would have been impossible without perfect solar eclipses, that enabled Eddington, and other physicists after him, to make precise measurements that could test Einstein’s theory. There are four basic conditions that need to be met in order to have a perfect solar eclipse:

Christian astronomer Hugh Ross notes the low probability of all of these factors coming together. In a recent interview for the Christian Broadcasting Network, Ross said, “The sun is 400 times farther away from us than the moon. But the sun is 400 times bigger. So that’s why you get a perfect solar eclipse.” Yet despite the extreme low probability, some atheistic astronomers believe that the exact combination of all of these factors is merely a “coincidence.”

Taking the view of these atheistic astronomers is close to believing that you can win a multi-million dollar lottery rather easily. As a Christian, I believe that it is far more reasonable to consider the possibility that the God of the Bible, in His providential way, made the exact conditions possible for us to observe perfect solar eclipses, thus enabling the remarkable growth of modern technology, in the 21st century. The existence of these four, exactly precise conditions, helped to me worship God as Creator, as I witnessed August’s solar eclipse, even a few hundred miles from where the path of totality occurred. 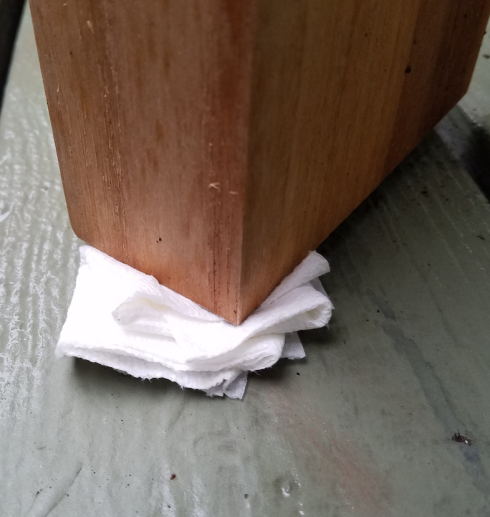 Looking for a napkin to prop up that short table leg? You might be better off with a different, more sturdy table.

Strangely however, some Christians seem content to have a wobble in their thinking on this topic. Consider this: Have you ever been out to a restaurant, where the table wobbles on the floor? It can be a rather annoying experience.

You fumble around for a book of matches, or a napkin, to place under the short table leg, trying to even the table out. You hope that you are not flipping your dining companion’s plate, as they try to eat their meal, when you lean over your side of the table to eat yours.

Prior to that 300 million year window, the moon would be too close to the earth, such that the disc of the moon would greatly exceed the disc size of the sun, thus making the exact measurements made by Sir Arthur Eddington difficult to obtain. After that 300 million year window, humans would not be able to even see a total solar eclipse, since the disc of the moon would be much smaller than the disc size of the sun. In other words, humans needed to appear on earth at exactly the right time in the 13 billion year history of the universe, which is a low probability event (unless you believe in a God of providence!).1

However, if the universe is less than 6,000 years old, as many of my Young Earth Creationist friends insist, you are effectively shortening the leg of the four-legged table of this argument, for demonstrating God’s providential action in the history of the universe. From a Young Earth point of view, the window for viewing a perfect solar eclipse far exceeds the time-span of the life of the universe, at least up to this point in time. In other words, we are not really living in any particularly unique period of time to be able to view perfect solar eclipses, at all! From that angle, the appearance of humans in earth history is no big deal, when it comes to viewing perfect solar eclipses.

Do you see how that table wobbles now?

True, if the universe is less than 6,000 years old, you still have the other three legs of the argument, that support the idea of the uniqueness of having perfect solar eclipses, in God’s created universe. So, I can not completely dismiss a 6,000 year old universe, as at least a theoretical possibility.

But I am still left with a short leg, on the fourth leg of the argument, and that leaves me with a rather wobbly table.

When your matchbooks, napkins, or your car keys fail to prop up that wobbly table in the restaurant, most people would probably just give up and ask for another table at the restaurant. Sadly, there are many people who grew up with a belief in Young Earth Creationism, as the one and only possible option for the Christian, and when some realize that their “table” is rather wobbly, more than a few have left the “restaurant” of orthodox Christian faith altogether, to go to a completely different “restaurant,” if you follow my analogy.

What a needless tragedy!!

As I have argued elsewhere on Veracity, belief in a Young Earth remains at least a theoretical possibility, and I respect that. But if the evidence from modern science, that has thus far concluded that the universe is 13 billion years old, creates in us a sense of incredible awe and wonder, at how God uniquely put us in the exact, precise time in earth history, to be able to view perfect solar eclipses, and enjoy the majesty of God, why would we reject that?

1. There are other factors that make the current moment in universal history so unique, with respect to observing perfect solar eclipses, such as the interference of supernova, in making observations during total solar eclipses, and the existence of telescope technology, that enabled folks like Sir Arthur Eddington, to make his observations. If you do the math, you will see what I mean. ↩

Clarke Morledge -- Computer Network Engineer, College of William and Mary... I hiked the Mount of the Holy Cross, one of the famous Colorado Fourteeners, with some friends in July, 2012. My buddy, Mike Scott, snapped this photo of me on the summit. END_OF_DOCUMENT_TOKEN_TO_BE_REPLACED
This entry was posted on Saturday, September 2nd, 2017 at 9:19 am and tagged with 2017 solar eclipse, big bang theory, solar eclipse, Young-Earth Creationism and posted in Apologetics. You can follow any responses to this entry through the RSS 2.0 feed.
« The Book of Malachi: In Seven Minutes
Pray for Nabeel Qureshi »

3 responses to “Perfect Solar Eclipses . . . (and the Wobbly Table of Young Earth Apologetics)”