Are Eclipses Signs from God? 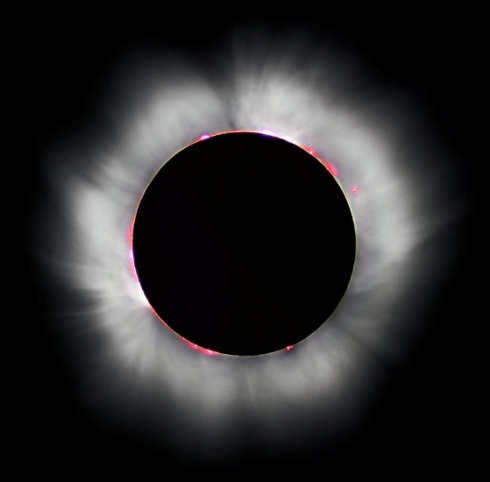 Some are calling it the “Great American Eclipse,” when the moon covers the disc of the sun, racing across from Oregon to South Carolina, on Monday, August 21, 2017. The last time this happened in the U.S. was 1918. But is God trying to tell us something with this event?

Some Christians might think so, but is such a belief warranted? The Bible does report some unusual astronomical phenomena, such as the darkness that covered the earth, on the afternoon of the Crucifixion.

It was now about the sixth hour, and there was darkness over the whole land until the ninth hour, while the sun’s light failed. And the curtain of the temple was torn in two”(Luke 23:44-45 ESV)

Interestingly, one popular Bible translation tries to tell us how this happened:

“It was now about noon and darkness came over the whole land until three in the afternoon because of an eclipse of the sun….“(Luke 23:44-45a NAB)

A solar eclipse? While the translators of the New American Bible might be good Bible scholars, they need a refresher in astronomy. Let me explain why.

First, the movement of the moon’s shadow across the face of the earth, across a single point, travels much faster than three hours. The moon’s shadow will book across the United States, at the speed of at least 1000 mph. For example, in Columbia, SC, in the path of Monday’s total eclipse, the duration of the totality will be 2 minutes, 30 seconds.

Secondly, the timing of the lunar calendar is completely off, to support the idea of a solar eclipse. The Crucifixion happened near the time of the Jewish Passover, which happens during a full moon, midway through the Jewish month of Nissan. Total solar eclipses only occur during a new moon, when the moon’s surface facing the earth, is completely within the sun’s shadow, which is at the opposite time of the month from a full moon.

The math simply does not work. Whatever darkness happened on Good Friday, trying to tie it strictly to a natural event of a solar eclipse is pure folly. Sure, God can use these things, for His purposes, and He can produce supernatural events. But whether it be solar or lunar eclipses, or planetary alignments, caution is in order before drawing too much from naturally occurring, astronomical events.

Astrology and the Bible Do Not Mix

In the history of the church, some Christians have read too much from the “signs in the heavens.” I remember watching the movie Elizabeth: The Golden Age, just shaking my head. Queen Elizabeth, the monarch who set the theological course for the Church of England, for at least the next 400 years, consulted her astrologer, John Dee, about how her navy would fair against the Spanish Armada.

Or there is the influential colleague of Martin Luther, the German Reformer, Philip Melanchthon, who consulted astrological horoscopes, to help him decide on when to take long journeys.  Even Huldrych Zwingli, the early Swiss Reformer of Zurich, dabbled in believing in various “signs and portents” in the heavens.

However, it would be anachronistic to judge Christians from earlier generations, who appropriated ideas from astrology, before the age of modern astronomy. But when some Christian leaders today, speculate on whether or not the “Great American Eclipse” is a sign of God’s impending judgment against America, it is cringe-worthy. To her credit, daughter of evangelist Billy Graham, Anne Graham Lotz, is being pretty vague, but it bothered me that she uses the prophet Joel to encourage people to look for heavenly “signs”:

“The sun shall be turned to darkness, and the moon to blood, before the great and awesome day of the Lord comes.“(Joel 2:31 ESV)

Lotz neglects to tell the rest of the story. While the Bible does employ cosmologically rich language to refer to God’s judgment, the Bible also warns us not to look to the heavens for prophetic signposts. For the prophet Isaiah, astrology is condemned, lumping it along with all forms of occultism and sorcery:

“12 Keep on, then, with your magic spells
and with your many sorceries,
which you have labored at since childhood.
Perhaps you will succeed,
perhaps you will cause terror.
13 All the counsel you have received has only worn you out!
Let your astrologers come forward,
those stargazers who make predictions month by month,
let them save you from what is coming upon you.
14 Surely they are like stubble;
the fire will burn them up.
They cannot even save themselves
from the power of the flame.“(Isaiah 47:12-14a)

So, for those planning on braving the traffic, to places like South Carolina, next Monday, enjoy the eclipse for what it is, a really cool display of God’s wonder and creation. It demonstrates the reliability, predictability and beauty of nature, which only a God of order and elegance can create. What a great opportunity to talk with friends about how awesome God is, as Creator!

But as for applying prophetic significance to the eclipse, as a reason why you might want to pull your money out of the stock market, to avoid financial ruin,… well, leave that to the astrologers.

Christians have other, better things to do.

Clarke Morledge -- Computer Network Engineer, College of William and Mary... I hiked the Mount of the Holy Cross, one of the famous Colorado Fourteeners, with some friends in July, 2012. My buddy, Mike Scott, snapped this photo of me on the summit. END_OF_DOCUMENT_TOKEN_TO_BE_REPLACED
This entry was posted on Thursday, August 17th, 2017 at 6:07 pm and tagged with 2017 solar eclipse, anne graham lotz, philip melanchthon, queen elizabeth and posted in Apologetics. You can follow any responses to this entry through the RSS 2.0 feed.
« Remembering Robert E. Lee, A Plodding Journey Towards Christ
The Book of Haggai: In Five Minutes »

4 responses to “Are Eclipses Signs from God?”