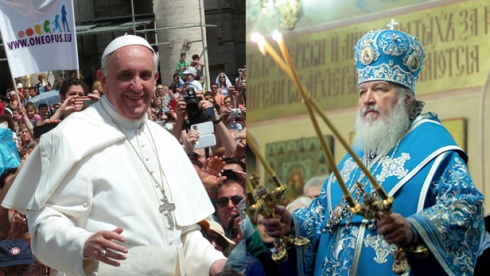 I recently attended a Roman Catholic funeral mass for a neighbor of mine. It had been years since I had attended a Catholic memorial service. Catholic worshipers genuflected, as the sanctuary filled up with smoke from the priest’s incense, an ancient practice of the church, things that you would never see in my Protestant Evangelical church. It reminded me of just how disconnected Protestant Evangelicals can become from other traditions within greater Christendom….

In my town, the two largest churches are made up of Protestant Evangelicals (my church) and the Roman Catholics, respectively. A number of decades ago, a group of families from Greece settled in the area, and opened up a bunch of restaurants. These families became the backbone of a relatively new Greek Orthodox church in town, opened just a few years ago.

Roman Catholics, Eastern Orthodox and Protestants make up the three great wings of Christianity, and yet these traditions are often isolated from one another. In general, Protestant Evangelicals know about Roman Catholics, but their reactions to Catholicism are mixed. Some are curiously fascinated with the traditions associated with Catholicism, and they are drawn to certain aspects of Catholic piety. They read their Henri Nouwen, Thomas Merton, and J.R.R. Tolkien, and they like the idea of going off to a Catholic monastery once in awhile for a retreat. But they do not always understand the whole “transubstantiation” thing… much less the incense. On the other side are those who have run as far away as they can from Rome, ditching their rosary as an “instrument of Satan,” believing that not a lot has really changed since the sixteenth-century Protestant Reformation. But probably, most Evangelicals stand somewhere in the middle, curious… yet cautious… about the Roman pontiff and his followers, … and those funny looking hats the Pope wears.

Evangelicals know even less about the Eastern Orthodox, such as the Greeks who have those restaurants in town. The Orthodox have the funny hats, too. The Orthodox have their “smells and bells,” which for the typical Protestant Evangelical leads to great bemusement. “But are they really Christians?,” many perplexed Protestant Evangelicals will honestly ask. That is what you get when you rely on movies like My Big Fat Greek Wedding for information about the Eastern church.

This sense of unfamiliarity is probably why last week’s meeting between Pope Francis and Russian Orthodox Patriarch Kirill does not register on the typical Protestant Evangelical radar. But it really should.

When Pope Francis and Patriarch Kirill embraced one another in Cuba, it was the first time in about 1,000 years since the chief leader of the Roman Catholic church met with one of the highest ranking leaders in Eastern Orthodoxy. In 1054, the Eastern and Western churches split, technically about a relatively obscure dispute over a line in the Nicene Creed, the filioque controversy, but mostly it was over who was really leading the church: was it the bishop of Rome, the Pope, or was it a college of bishops, as advocated by the great churches of the East?

The closest analogy in the Protestant Evangelical world that could come to mind is if cessessationist Bible teacher, John MacArthur, would have a meeting and a handshake with charismatic evangelist, Joyce Meyer. Now, that would rock a lot of people’s worlds!

It is difficult to say what might come of this meeting between the Pope and the Russian church leader. It was not like the Pope was meeting with all of the Eastern Orthodox leaders.  The balance of influence wielded by the Greek, Russian, Antiochene, and various other Eastern churches is a sensitive matter. Both leaders made a joint plea  for unity and a call to aid Syrian and other Christians, enduring hardship due to war, and the threat of terrible persecution.

Nevertheless, it was historic. Could this be the start of some real reconciliation? Christianity Today’s coverage of the meeting is worth reading.

Clarke Morledge -- Computer Network Engineer, College of William and Mary... I hiked the Mount of the Holy Cross, one of the famous Colorado Fourteeners, with some friends in July, 2012. My buddy, Mike Scott, snapped this photo of me on the summit. END_OF_DOCUMENT_TOKEN_TO_BE_REPLACED
This entry was posted on Friday, February 19th, 2016 at 5:50 pm and tagged with eastern orthodox, ecumenism, protestant, roman catholic and posted in Topics. You can follow any responses to this entry through the RSS 2.0 feed.
« The Fellowship of Christian Athletes and the Story of Don McClanen
Charles C. Ryrie and His Study Bible »