Oxymoronic: On How (Not) to be a Moron 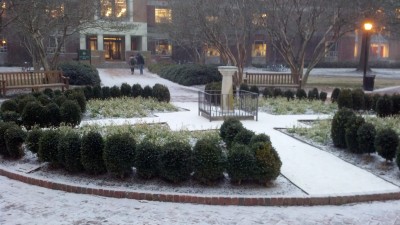 Light snow falling on the sundial, in front of Swem Library on the campus of the College of William and Mary, early evening, January 28, 2014.

It is snowing in Williamsburg, Virginia this evening. We do not get that much snow here, so when it does snow it can be memorable. But some memories can trigger some other embarrassing memories.

It was another rare snowy night last year when I went with some friends to hear Terry Mortenson of Answers In Genesis speak at the College of William and Mary defending his position for Young Earth Creationism. The title of the talk was “Was Darwin Right?” (Check here and here for the YouTube videos recorded elsewhere from an earlier presentation). As the snow was melting down my neck in the auditorium, I was captivated by a back and forth dialogue between Mortensen and a skeptical college student who obviously knew more about genetics than I did. I had read enough of Francis Collins’ The Language of God to follow along in the discussion at a modest level, but it became apparent that after about 15 minutes…. this was the longest engagement during the entire hour-plus Q&A period… that Mortensen was completely out of his league here. Mortensen is a historian of science and theology, but he is not a genetic biologist. Mortensen was gracious and kind… but not very persuasive.

John Paine this morning left a thoughtfully engaging yet brief response to my last, and not-so-brief, Veracity post on “An Evolutionary Creation: Oxymoron?“ I could not simply respond with a brief comment (John gives me a lot to think about… there goes my lunch break), so with the snow as a tickler to my thoughts, here goes the rest of my rejoinder…..

A little bit of knowledge can be dangerous.

I left the auditorium that snowy evening thinking about that interchange between Terry Mortensen and the young skeptic. As I was slowly making my way home across the near icy roads, I was painfully reminded of something I had done a little more than ten years ago. I had recently finished reading Michael Behe’s Darwin’s Black Box and a whole series of essays on Intelligent Design. Like many Christians, I was finding myself disturbed over the increasing blizzard of secular materialism enveloping our culture. The Dover High School fiasco over Intelligent Design was not yet on the cultural radar. I was convinced by the Intelligent Design arguments. I thought I had all of modern biology figured out. I had my William Dembski and Phillip Johnson quotes in hand. I was ready to defend my faith against the onslaught of the secular infidel.

Did I tell you that a little bit of knowledge can be dangerous?

I got involved in an online debate on an Internet site with some atheistic skeptics. We were talking about Darwin’s finches. We hit on the Cambrian explosion. We went at it on irreducible complexity. I was confident that I had poked holes in evolutionary theory.

But after several back and forth sessions, I soon realized that I was out of my element. I am a computer engineer anyway. I love science stuff, but I am merely a layman when it comes to evolutionary biology. I was confronted by evidence that I was not able to respond to intelligently. I simply was not able to continue to engage my atheistic counterparts without following down an endless rabbit trail. Time was slipping away. I was not keeping up with my household chores. My wife had other things for me to do. Now I was in real trouble.

Perhaps an Old Earth creationist, ID proponent, or better prepared Young Earth creationist who actually knew what they were talking about would have faired better defending the Gospel and interacting with the evolutionary genetics concerns held by that skeptical college student on that snowy night last year or with my online antagonists some years ago (thankfully, I can not find those Internet dialogues embarrassingly preserved on the WayBackMachine… whew!!!… I was not as nice as Terry Mortenson, nor was I as gently skillful as my Veracity cohort, John Paine, is in his comments).

It was only a small consolation to know that some of the counter-arguments presented against me were just as shortsighted as some of my faulty displays of supposed evidences and logic. It is not just supposedly “fundamentalist” Christians who know very little about how “evolution” actually works. Frankly, there are plenty of biology majors and professionals out there who know very little about “Darwinian evolution”.

All I know is that from my online misadventures, I knew I had really missed it. I felt like I had come across as being some sort of a moron.

No, I will go stronger than that.

I was a moron.

Instead of honoring the Lord and being a witness for His glory, I was merely displaying my ignorance. I still want to have engaging conversations with others, trusting that the Lord will use it: on-line, or much, much, much better, in person! But I really have no more interest in trying to score debating points like I was a few years ago. I learned a lot about myself but it was frankly counterproductive to the mission of Gospel proclamation, though I can surely appreciate God’s sovereignty in all things. Besides I have more important things to do.

Like many Veracity readers, I simply do not have the time for a graduate level appreciation of the subject of evolutionary biology. But given the current cultural climate where so many in and out of the church perceive the warfare that currently exists between the field of genetics and evangelical defenders of the Bible, I think it would behoove the Bible-believing Christian to invest at least some energy into learning some things about evolutionary biology and genetics, such as from some of the folks at BioLogos who defend Evolutionary Creationism, like Dennis Venema (highly recommended!!!).

At the same time, it is important to consider some of the more thoughtful critiques of Evolutionary Creationism by those in the Young Earth, Old Earth, and Intelligent Design communities that John and I have continued to put forward here on Veracity.

For me, the goal is not to develop an arsenal of apologetic snowballs to toss at your agnostic or atheist neighbors and friends. Nor does it mean that we should launch an avalanche against other Christians who do not share our point of view. Partly however, it does suggest that we should at least work towards having conversations with others that are… shall I say… informed. At least be honest that your expertise in an area needs some refinement. You do not need to learn the hard way like I did in how to (not) be a moron.

Most importantly, we need to consider these things because the more we learn about something the more we realize how much we really do not know.

And that can be a good thing.

Spiritually speaking, we can know some things about God, but the more we progress in our Christian walk, the more we will ironically discover how little we know of the ways of the Lord. As we grow in our journey towards Christ, we are continually faced by a God whose ways are simply beyond all that we can even think of or even imagine.

I do not know how much it snows in your neck of the woods. But if it does, you might want to think about this the next time it snows:

A little bit of knowledge can be dangerous.

Clarke Morledge -- Computer Network Engineer, College of William and Mary... I hiked the Mount of the Holy Cross, one of the famous Colorado Fourteeners, with some friends in July, 2012. My buddy, Mike Scott, snapped this photo of me on the summit. END_OF_DOCUMENT_TOKEN_TO_BE_REPLACED
This entry was posted on Tuesday, January 28th, 2014 at 7:52 pm and tagged with Darwinism, Evolutionary Creationism, Irreducible Complexity, veracity and posted in Topics. You can follow any responses to this entry through the RSS 2.0 feed.
« An Evolutionary Creation: Oxymoron?
Which Science Do You Trust? »

2 responses to “Oxymoronic: On How (Not) to be a Moron”