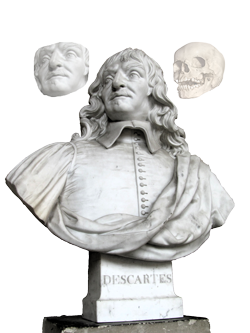 Have you ever thought about your thoughts? This may seem like a ridiculous question, but it turns out there is a powerful apologetic argument for life after death that derives from simply understanding that humans have a body and a soul, and that the immaterial element (the soul) is spectacularly different from the material element (the body).

Continuing our review of the Areopagus Journal issue dedicated to Life After Death (Fall 2011), in this post we will explore what apologetics can bring to bear on the subject using philosophy, logic, and history.

The blog text below in italics is entirely the writing of Chad V. Meister.  I have edited out quite a bit of material to fit this format, without (I hope) misrepresenting his beliefs and positions.

Mind, Body, and the Possibility of Life After Death

Various conceptions of the human self have been held in the West, the two foremost being dualism and materialism.  Historically, dualism has been the more prominent of the two.  There are different conceptions of dualism as well, but on one main account the human person consists of two substances, one material (the body) and the other immaterial or mental (the soul or mind).  Rene Descartes (1596-1650) is perhaps the most widely recognized defender of substance dualism.  On his account, sometimes called the Cartesian view of the soul, the soul is an unextended, non-spatial substance, and it is contrasted with the body, an extended, spatial substance.  The soul and body are (somehow) connected to one another, but how an immaterial substance can connect to and interact with a physical substance is a bit of a mystery—a mystery which has often been castigated as the problem of the “ghost in the machine.”

Another version of dualism is the Thomistic view, derived from the work of Thomas Aquinas (1225-1274), in which the soul is understood to be a unity of inseparable parts, including mental states (such as feelings, thoughts, and sensations), capacities, powers, and structures.  On this account the soul, although immaterial, is what animates, unifies, and develops the biological functions of the physical body.  The soul is more deeply integrated with the self than on the Cartesian view, for the soul is the essence of a person; it is an individual’s source of life as well as the ordering principle of the person.

In one form or another, many of those in the Western religions have been dualists as the Hebrew Bible, the New Testament, and the Koran all seem, on a straightforward read at least, to affirm the reality of body and soul.  Most of the major Western philosophers have also held to some form of dualism.

Furthermore, most dualists maintain that there is life after death.  For some, immortality involves an embodied state, and the Jewish, Christian and Islamic views of the resurrection of the body are cases in point.

A second defense of dualism is the knowledge argument.  The following story is intended to demonstrate the heart of the argument:

Mary is a brilliant scientist who is, for whatever reason, forced to investigate the world from a black and white room via a black and white television monitor.  She specializes in the neurophysiology of vision and acquires, let us suppose, all the physical information there is to obtain about what goes on when we see ripe tomatoes, or the sky, and use terms like ‘red’, ’blue’, and so on.  She discovers, for example, just which wavelength combinations from the sky stimulate the retina, and exactly how this produces via the central nervous system the contraction of the vocal chords and expulsion of air from the lungs that results in the uttering of the sentence ‘The Sky is blue’…. What will happen when Mary is released from her black and white room or is given a color television monitor?  Will she learn anything or not?  It seems just obvious that she will learn something about the world and our visual experience of it.  But then is it inescapable that her previous knowledge was incomplete?  But she had all the physical information.  Ergo there’s more to have than that, and Physicalism [or materialism, the view that everything which exists can be completely described in terms of physical information] is false.

Since there are different kinds of experiences (subjective and objective) and different kinds of information (physical and non-physical) which a person can have, there’s a difference between the physical and mental.  So, the argument continues, some form of dualism makes more sense than materialism as a general account of the self.

A third argument for dualism comes from personal identity….  All, or at least most all, of the cells in a human body are regenerated or replaced every seven years.  At the quantum level things are even more in flux!  But are we not yet the same person since birth?  Is not that person in your childhood photos you?  Substance dualists argue that we maintain absolute identity through change because our essence—our immaterial substantial soul—remains the same throughout bodily changes.

There are a number of arguments specifically defending immortality.  Given space restraints we will limit our examination to three.

The Nature of the Soul

…J.M.E. McTaggart (1866-1925) has also offered an argument for the immortality of the soul based on its simplicity.  He contends that the soul is probably immortal since (1) it is not constituted by separable parts, and so cannot be destroyed through a separation of its parts (as material objects are destroyed), and (2) it probably cannot be annihilated since there is no evidence that anything is ever annihilated (even material objects don’t just cease to exist).

The Nature of God

For most theists across the religious spectrum, God is understood to be infinitely good, loving, wise, and just.  As such, God is not the kind of being who would create human persons with the longings and aspirations we have, including the hope of life after death, and then have these aspirations go forever unfulfilled.  Furthermore, if you love someone, you would not want that person to cease to exist.  Since God loves us with an infinite and perfect love, he surely would not want us to cease existing.  So, the argument goes, we can rest assured that if God exists, there will indeed be life after this life.  Given the very nature of God, he will make it so.

There is much debate in the recent literature and religious and biblical studies on the meaning of and historical evidence for the resurrection of Jesus.  Most biblical scholars—both those who believe that Jesus was resurrected from the dead and those higher critics who do not—agree with the following: (1) Jesus died on a cross and was placed in a tomb, (2) Jesus’ body was gone from the tomb soon after his death (or at least the disciples believed this), (3) Jesus’ disciples believed he was resurrected from the dead and appeared to and spoke with them, and (4) key Jewish leaders, including Saul of Tarsus (who became the Apostle Paul) and Jesus’ brother James, were converted to belief in and worship of Jesus shortly after his death.  Given these historical events, the question then becomes what best explains this data.  My own research has led me to conclude that the historical evidence for Jesus’ resurrection is quite persuasive, especially when considered within a theistic worldview.  But don’t simply take my word for it; explore this evidence for yourself on both sides of the debate.  Gary Habermas, Stephen Davis, and William Lane Craig are notable scholars who argue that Jesus’ bodily resurrection provides the best explanation of the historical facts; Michael Martin, Anthony Flew, and Robert Price are notable scholars who argue that a naturalistic account provides the best explanation of the historical facts about Jesus’ body after his death.

Just as there are arguments for immortality, there are also a number of arguments against life after death.  Two of the most significant ones are explored next.

The Dependency of Consciousness on the Brain

One response to this argument is that while having a live, functional, physical brain may be a sufficient condition for consciousness, it is not a necessary condition. As I argued above, a number of dualists maintain that the soul (or mind) is not identical to the brain and continues to exist in a conscious state even after the death of the physical body.  Another response is to agree that the individual human cells do need a live, physical brain to be conscious, and that they will not be conscious following the death of the body unless, say, God gives them a new body.  Nonetheless, they will be conscious once again when they are resurrected bodily from the dead.

Another argument against life after death directed at the dualist has to do with personal identity.  If souls continue to exist in a disembodied state after the death of the physical body, then what would identify them as unique, individual persons?

A dualist could respond by claiming that, even if it were not possible for one to identify a disembodied soul, or to distinguish one soul from another, it does not follow that such disembodied souls could not exist.  While there might be an epistemic (knowledge) problem, it does not follow that there is an ontological (being) problem.  Furthermore, as Christians (and many other monotheists) have historically believed that human immortality will entail embodied life, it could be the resurrected body which constitutes the criterion for re-identification after death (from an external, third person perspective) while the immaterial soul would constitute the survival criterion (from an internal, first person perspective).

Several notable philosophical arguments for dualism have been offered here.  If dualism is true, then life after death is at least plausible…. While none of this argumentation proves that there is life after death, it certainly shows that a solid case can be made for it.  Belief in the afterlife need not be based on blind faith.

When I was young and teachers would talk about Descartes, philosophy, and other cerebral things my mind would wander out the window to the football field or some other place—I simply wasn’t interested. It’s amazing what a little time can do to season our ability to reason. This was a pretty heady article, but one that is well worth the read.  I hope you found it to be as encouraging as I did.

In our next post on Life After Death (part 3, and the end of this series) we will see what we can glean from near death experiences, address the existence or nonexistence of ghosts, and wrap up with a summary of all three posts.

Clarke and I  will be participating in a Facts & Faith symposium (along with Ken Petzinger, Dave Rudy, Dick Terman, and  David Thompson) at the Williamsburg Community Chapel, Sunday evenings November 10, 17, and 24, 2013 at 6:30 pm.   Please see our post on the symposium for details, and please bring a friend if you’re in the Williamsburg, Virginia area.  Click here to register (it’s free).

This blog is topical and devotional--we post whatever interests us, whenever. If you want to follow in an orderly fashion, please see our Kaqexeß page. END_OF_DOCUMENT_TOKEN_TO_BE_REPLACED
This entry was posted on Wednesday, October 9th, 2013 at 9:05 pm and tagged with Christianity, Descartes, Dualism, Heaven, Hell, Life After Death, Thomas Aquinas, veracity and posted in Apologetics, Topics. You can follow any responses to this entry through the RSS 2.0 feed.
« Facts & Faith Symposium
Jonathan Edwards on Charity Towards the Poor »