Ivor Noël Hume, and the Evidence for Faith 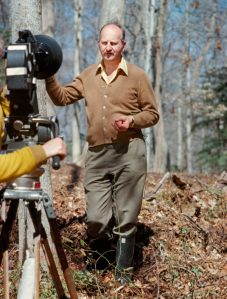 Ivor Noël Hume, actor turned famous archaeologist, in the filming of “Search for a Century,” a 1970s Colonial Williamsburg production.

Ivor Noël Hume, a pioneering archaeologist of colonial America, died on February 4, 2017. As the New York Times tells it in their remembrance, Hume was an “accidental, self-taught English-born archaeologist who unearthed the earliest traces of British colonial America.” He was the director of archaeology at the Colonial Williamsburg Foundation from the mid to near late 20th century, excavating 18th century Williamsburg, as well as 17th century settlements in the area, notably, Wolstenholme Towne, at the Carters Grove estate. Most locals now know of the place as part of Martin’s Hundred, in the neighborhood of the Kingsmill community subdivision.

I only met Mr. Hume a few times growing up as a kid, but my late father, George Alan Morledge, worked with him at Colonial Williamsburg. My dad, an historical architect, had been hired by Colonial Williamsburg vice president, Ed Kendrew, to assist in the team effort with the archaeologist Hume. From digging below ground to restoring 18th century structures above, these historians across various disciplines enjoyed the pursuit of evidence that helped to reconstruct Williamsburg, and other local, historical sites, to paint a portrait of what life really looked like in the early years of colonial Virginia.

Many consider Hume to be the “father of historical archaeology.” As I remember him, mostly through my dad, Ivor Noël Hume was quite a character.
END_OF_DOCUMENT_TOKEN_TO_BE_REPLACED