Imagination. Is there such a thing as godly imagination in the life of a believer in Christ?

Is there a place for imagination in the spiritual life of the Christian?   Some critics argue that Christian faith stifles human creativity.   Does the use of imagination in worship and prayer lead to spiritual transformation or spiritual depravity?

On the one side, the Bible consistently warns that a misplaced imagination will distract the Christian from true worship.  For example, everywhere in the classic King James Version, in contrast with more modern translations, the English word imagination from the original Hebrew and Greek phrases always carries a negative meaning (then contrast with ESV). For example:

But they hearkened not, nor inclined their ear, but walked in the counsels and in the imagination of their evil heart, and went backward, and not forward (Jeremiah 7:24 KJV).

Clearly, it is possible to become so engrossed in our own imagination, or someone else’s imagination projected towards us, that we fail to hear God. In our television-saturated world and ultra-realistic CGI animation movies, the massive feast before our eyes can easily clog up our ears to God’s Word. Even in the church, if in our Sunday morning services we find ourselves remembering more about the vivid illustration used by the preacher, and yet still unable to recall what Bible passage was being expounded upon, then I think we have a deadly serious problem.

OK.  So far, given this overview, the concept of imagination does not bode well in the life of a Christian.   But does this mean that all imagination is contrary to God’s purposes? Is there a more positive, biblical, even godly approach to imagination? Sometimes, in an effort to fight off counterfeit spirituality, we can easily throw out the baby with the bathwater.
END_OF_DOCUMENT_TOKEN_TO_BE_REPLACED

I spent a couple of weeks writing this post, adding and removing parts, only to end up with an over-spiritualized, not-very-good penultimate result.  After some painful edits, how about I just get right to the point?

The original idea for this blog was to have a place for “Sharing resources that corroborate the Bible.”  While we remain quite committed to that theme, we’re finding our voice in a slightly different major chord.  Consequently we are changing the tag line for Veracity to “Sharing the Joy of Personal Discipleship.”

What is personal discipleship?  It’s an answer to the darkness of man we see all around us every day.  It’s keeping our eyes on the only thing that counts—faith expressing itself through love (Galatians 5:6b, NIV84).  We define personal discipleship as the process in which a believer or seeker takes personal responsibility for investigating the claims and content of the Bible. END_OF_DOCUMENT_TOKEN_TO_BE_REPLACED 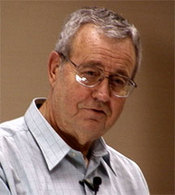 Dallas Willard. Pioneer for the renewal of spiritual formation in the contemporary church.

Can you tell the difference between someone who says that they are a Christian, and someone who is not?

The Apostle Paul challenges us:

Examine yourselves, to see whether you are in the faith. Test yourselves. Or do you not realize this about yourselves, that Jesus Christ is in you?—unless indeed you fail to meet the test! (2 Corinthians 13:5, ESV)

Whoa.  I am not sure I like this type of test. Do you meet the test? Or does it only apply to the really “spiritual” people out there?

The existence of many people who are Christian “in name only” is a serious problem in the contemporary church, even among so-called “Bible-believing” congregations. Dallas Willard, who died on May 8, 2013, believed that he had pinpointed the source of the problem.
END_OF_DOCUMENT_TOKEN_TO_BE_REPLACED