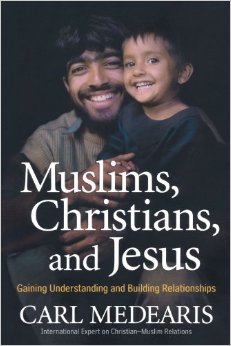 My wife and I just finished reading a book written by Carl Medearis, Muslims, Christians, and Jesus: Gaining Understanding and Building Relationships. Little did we know that when we first started to read the book that current events surrounding the world refugee crisis would make our reading of the book into quite a big conversation starter.

Some voices in our culture say that Islam and Christianity are basically equal pathways to God, just using different language. Therefore, Christians should not bother trying to share their faith in Jesus with Muslims. On the other side, some say that Muslims can not be trusted, because of their association with terrorism.

Carl Medearis avoids the pitfalls of those two extremes. He focuses on the person of Jesus. I reviewed my first Carl Medearis book, Speaking of Jesus: The Art of Non-Evangelism, here on Veracity. Medearis and his family spent 12 years in Beirut, Lebanon, building relationships with Muslims in the Middle East, talking with them about Jesus. As in his other books, including Muslims, Christians, and Jesus, Medearis recounts some of his conversations with Muslim leaders that challenged me to rethink my own prejudices against Muslims as real people, who need Jesus just as much as I do. In addition to giving a helpful overview of what Islam is, Medearis provides some very useful tips in making friends for Jesus with Muslims. As a read geared towards a popular audience, it is a fairly short book, too.

For example, according to Medearis, did you know that Muslims often think that Christians do not properly honor the Bible as God’s Holy Word? Sure enough, this past Christmas, I invited a few Muslims friends to a concert at our church. In our church, we put our pew Bibles in metal trays attached underneath the seat in front of where we are sitting. My Muslim guests were appalled that we stored our Bible down low, underneath people’s rear-ends, instead of lifting God’s Word up high, as a sign of honor and respect.

I had never thought about that before.

In early 2017, a new American President implemented a temporary travel ban on citizens from several Islamic countries, including an indefinite ban on refugees from Syria coming into the United States. Several million people have been fleeing civil war in Syria, including not just Muslims, but Christians as well. Refugee resettlement programs can take a very long time to work through, so the recent moratorium complicates the situation. Veracity blogger John Paine and I have made our views known before here on Veracity, on which we both agree, regarding the Syrian refugee crisis, and how Christians should respond.

Christians all over the world, and especially here in the United States, are divided over this issue. Hundreds of prominent Christian leaders oppose the refugee ban, while others support it. World Relief, an evangelical relief agency working with churches to settle refugees, has drafted an open letter, as a full-page in the Washington Post in February, 2017, calling upon conservative evangelical Christian leaders to speak out. It is a delicate balance between being obedient to the Gospel’s call to love and care for the refugee, with the requirement for national security and protecting American borders. We need to have a conversation among Christians today, as to how believers are to pray and be faithful in God’s calling to best assist the refugee, in a dangerous world.

Might I suggest that you grab some copies of Carl Medearis’ Muslims, Christians and Jesus, read it together with Christian friends as a group, discuss it, and then, do something about it?

When A Jew Rules the World: Joel Richardson’s Defense of Future Israel, An Extended Review

Prophecy teacher and author, Joel Richardson, makes a measured yet passionate plea for a premillennial view of the End Times, that includes a definite future for ethnic, national Israel. But hold onto your Bible: Is this an antidote to Christian Antisemitism?

And now, time for an in-depth book review… so pour yourself a beverage, before you dive in…

According to New York Times bestselling author, Joel Richardson, the answer is “yes.” Joel Richardson is a fairly young, articulate spokesperson promoting Christian Zionism, hosting an Internet biblical prophecy program, “The Underground.” Joel Richardson travels widely in the Middle East, with a genuine excitement about God’s mission to proclaim the Gospel in that part of the world. He is passionate about keeping Christians informed about the Middle East through various books and films. Nevertheless, Joel Richardson is deeply concerned. In a promotional advertisement for Richardson’s 2015 book, When a Jew Rules the World: What the Bible Really Says About Israel and the Plan of God, we read, “In the past thirty years, the trend among American evangelical’s view of Israel has shifted dramatically.”

As Richardson’s ad continues on later, “A new generation of Christians are not only turning away from traditional support for Israel, but from the very belief that there yet remains any ongoing calling and election upon the Jewish people. As this portentous shift is seen on a growing number of evangelical seminaries, and even on Facebook, are Scripturally-grounded Christians prepared to provide solid responses?”

Prophecy teacher Joel Richardson impresses me as an articulate, well-informed defender of an Israel-centric view of the End Times, which stands at the heart of the concern over “replacement theology.” This is a hard-hitting book, and it deserves wider exposure, for those not familiar with the arguments proposed by folks like Richardson. But I would be careful before you raise the issues that concern Richardson in your small group Bible study. For example, in that same Richardson ad, there is also an extraordinary claim: “There is a sudden rise of anti-Israel and anti-Semitic sentiment among Christians today. ”

There is? Really? In the wider culture, I thought being Jewish was cool. In a post-Holocaust era, with movies like Steven Spielberg’s Schindler’s List permeating popular consciousness, have Christians bucked the cultural trend and grown more hateful towards Jewish people in recent years? END_OF_DOCUMENT_TOKEN_TO_BE_REPLACED

Thomas Aquinas, by Fra Bartolomeo. During a period of Islamic ascendancy in medieval Europe, Aquinas led the way as a follower of Jesus to transform history.

According to the U.S. Census of 2010, Islam is the fastest growing religious movement  in America, increasing 66.7% over the previous ten years, as compared to only a 1.7% increase among evangelical Protestants. How do we best relate the Gospel to Muslims? Here is a nugget from church history on Thomas Aquinas and the influx of Islam into medieval Europe with lessons for today.

So, how did the medieval church respond to the overwhelming cultural influence carried by the Arab Muslims into Christian Europe? Enter in Thomas Aquinas. Aquinas was a young Dominican monk in the 13th century as he thought about the growing influence of Islam throughout the known “Christian” world. But Aquinas knew that the famous ancient Greek philosopher, Aristotle, was perhaps the most important thinker enlisted by the Muslims to support Islamic belief. Aquinas began a nearly lifelong study of Aristotle. His magisterial Summa contra Gentiles was written in about 1264 largely as an apologetic treatise for use by Christian missionaries when explaining the faith to Muslim critics. In Summa contra Gentiles, he comments extensively on Aristotle, the great pagan thinker, in an effort to defend the Gospel.

END_OF_DOCUMENT_TOKEN_TO_BE_REPLACED

Zero. Have numbers ever helped you in your life? If so, go thank your local Muslim neighbor, today!!

Muslim countries. The Undeveloped World. Kind of go together don’t they? Except for oil-rich places like Dubai, this is a typical impression held by Christians in the West. But what if you were from a Muslim country? Would that impression make you feel very good? Probably not. You might feel a little like a ZERO.

In the wake of current tensions in Egypt, Syria, and Iran, Carl Medearis has been getting me to rethink some things here on Veracity.   If you know of anyone who has done missionary work among Muslims, you will learn from them that there is a long history of mistrust between Christians and Muslims that you simply have to work through if you hope to make any progress in sharing your faith. A huge part of that story is how the tables have been flipped over the centuries with respect to cultural influence.
END_OF_DOCUMENT_TOKEN_TO_BE_REPLACED

Call Yourself a “Christian”?

What does it mean to “follow after Jesus” as opposed to simply being a “Christian”? Carl Medearis has some thought-provoking ideas.

I have a missionary friend of mine who supports the ministry of Carl Medearis. I had heard of Medearis before, and I have a book by him in my library that remains unread, Muslims, Christians, and Jesus: Gaining Understanding and Building Relationships. Like many folks today with tight schedules, I simply have not had the time to read the book. But I am a cheap guy, and so when my missionary friend sent me a link to download a **FREE** copy of Medearis’ latest book as part of a limited time offer, I thought “Sure, I’ll get it…. but I’ll probably never read it.” So I downloaded an electronic copy of Speaking of Jesus: The Art of Not-Evangelism. It is a fairly small book, so I just happened to glance at the title of the last chapter, “Gays, Liberals, and Muslims“….. Say whaa??