Over the past week, I have been thinking about the death of the United Kingdom’s sovereign, Queen Elizabeth II. There might be some lessons for Christians in this time of mourning. 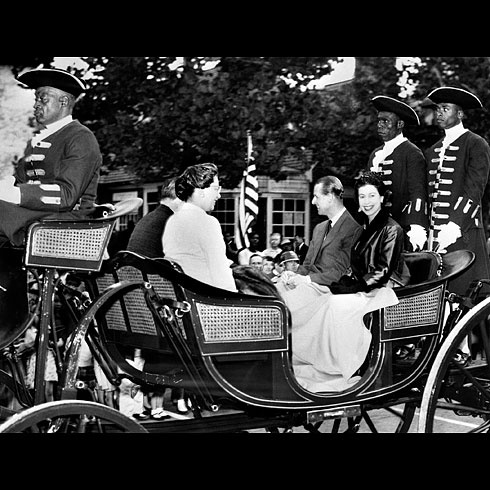 First, a quick and curiously fun anecdote: The right-most carriage attendant, in a tricorne hat, in the above photograph was a dear friend of my parents. His son works in my building, where I work at the College of William and Mary today. This man had the opportunity to accompany the carriage that carried Queen Elizabeth II through Colonial Williamsburg some 65 years ago. Elizabeth is seated, smiling and facing the camera. Her husband, Prince Philip, is seated to her right.

At age 31, in 1957, just five years after she was declared as Queen of the British Empire (1952), Elizabeth II made this visit to Williamsburg, Virginia, to commemorate the 350th anniversary of the founding of the English colony at Jamestown. My parents’ friend years later told me that it was quite a spectacle to be with the Queen, and ride down Duke of Gloucestor Street, through the center of town.

During those years, Elizabeth II had begun to oversee the dissolution of the British Empire, as one-by-one, former colonies declared their independence from the English island. This led to the modern creation of the United Kingdom, with its associated British Commonwealth of Nations. Some today still protest that the British monarchy has not done enough to apologize for the injustices inflicted during those centuries of British colonial rule. After all, the monarchy is not very democratic. The whole idea of having a “king” or a “queen” seems really quirky to some, even unfair…. even unjust!

Perhaps this will pigeon-hole me, and typecast me as a hopeless traditionalist, but I have been profoundly moved by the Queen’s death. Elizabeth’s first prime minister, Winston Churchill, was born during the Victorian era in 1874. Elizabeth’s last prime minister, the current Liz Truss, was born in 1975, just over a hundred years later. The span of time that Elizabeth II has served has been breath-taking. The events during her lifetime, from her service as a driver and mechanic for the Auxiliary Territorial Service, during the crisis of World War II, to the 2020 Coronavirus pandemic have been world changing.

Her life encompassed 30% of the entire history of the United States.

She even parachuted into the London 2012 Olympics with James Bond…. well, sort of...

But as an American, Queen Elizabeth was not my sovereign. So, I am left trying to figure out why I have been so emotionally struck by her death. Why have I been so choked up about her? I have a few thoughts, so I await your comments in the comment section of the blog.

What strikes me the most about Queen Elizabeth II was that she served out of a profound, even sacred sense of duty, even in the most spiritual way. She assumed her role in the most sacramental manner, in the best sense of the word. She was a type of guardian of traditional values over a long period of time, during a period of great cultural upheaval. For 70 years as chief monarch, she was able to rise above partisan politics, surviving many prime ministers and political shifts. But there she stood, resolute in her duty, and in every Christmas message, she was quite explicit in making her Christian faith known.

During the darkest days of the pandemic, the Queen served as a symbol, a steadiness, empowered by her Christian faith, that reassured us that “everything will be all right.” In one address, as we were all hunkered down at home, she famously said, “We will meet again.”

I found her testimony comforting. Was this sense of comfort completely rational? Probably not. Does the idea of a monarch in a democratic society makes sense today? Not really. But intuitively, I believed that the Queen was right. I believed that she carried with her a strange sense of moral authority…. kind of weird, if I think about it. But the sacramentality of it all is indeed real.

We Americans have something to learn from our former overlords in the U.K. In many ways, the institution of the monarchy today in the U.K. is merely a figurehead type of reality. Most of the real work that gets done in the U.K. is in Parliament. Nevertheless, the role that Elizabeth II served reminds us that we need something, or someone, to help lift us out of our never-ending political scandals, squabbling, and social media frenzies.

We Americans on the other hand have responded differently. We scrapped the monarchy, but what have we gained from it? Instead of Kings and Queens, we have Presidents. But each and every President has appeared to be captured by some form of partisan politics.

I am not saying that we should go back to a monarchy. I like my baseball and American apple pie, thank you very much. But sadly, we have tried to substitute the notion of duty, that Elizabeth II so ably embodied, with a kind of celebrity culture that continues to disappoint. Elizabeth II, on the other hand, managed to rise above it all.

OK. She was not perfect. No one is. No one, but Jesus, that is. But for most of her time as the United Kingdom’s Queen, she was held above reproach.

Sadly even more still, Christianity particularly in America suffers from the same type of celebrity culture, that knocks us down when Christian leaders fail us. Unfortunately, the celebrity culture system in our churches has created a crisis where many have left Christianity, not because they no longer really believe in the Christian faith to be true, but rather, because they no longer trust that our churches are being led by godly, loving people.

The democratic ethos that drove the Great Awakenings in America’s Christian history has not been without its faults. The celebrity culture system, especially in Protestant evangelical circles of Christianity, has and continues to put enormous pressures on pastors of churches and ministry leaders. They are expected to be superhuman, when they are not. So, when we read about yet another megachurch pastor or evangelist falling from grace, or find out about yet more reports of spiritual or other abuse perpetrated by burned out Christian leaders, it demoralizes us.

See what you think.

Elders exist out of a sense of duty, to make sure that the teachings of the Christian faith are being passed down from one generation to the next, rising above the challenges posed to us by celebrity culture. Elders, or to use the New Testament Greek term, presbyters, are there to act as guardians of sacred tradition. It is a sacramental duty that they perform. It has been that way since the days of the early church.

Sadly, we have forgotten or obscured this aspect of Christian teaching and practice in our day. Too many elder church boards have adopted the mentality that they are first and foremost like a board of directors for a corporation, where the head pastor is like the CEO. The local church looks more like a business than a spiritual family.

Now, every institution does need a board of directors. Every organization needs something like a CEO. Administrative decisions still need to be made. It is still a noble and crucial calling to serve in that capacity. But when this administrative aspect of being an elder crowds out the New Testament requirement that an elder be above reproach, to be that spiritual guardian of the faith that was once handed down to the saints, to make sure that the traditions of historically, orthodox faith are properly being passed down to a new generation, then we risk missing out on why the New Testament teaches that local churches need to have elders to begin with.

It is not about power. It is not about exerting control. It is about being a spiritual example. Perhaps the New Testament understands something about how human psychology and sociology really works, at a deeply mysteriously spiritual level.

Being a Queen of a Commonwealth is not the same as being an elder of a local church, as the New Testament teaches. Far from it. But there is some overlap of ideas here.

What the U.K. has been able to figure out is something Christians churches need to figure out. We need spiritual “Queens” that offer stability in a rapidly changing world. Perhaps this is partly why the New Testament teaches that a local church needs elders.

Just something to think about. Let the comments section below be filled the voices of those decrying me as a hopeless traditionalist!

Clarke Morledge -- Computer Network Engineer, College of William and Mary... I hiked the Mount of the Holy Cross, one of the famous Colorado Fourteeners, with some friends in July, 2012. My buddy, Mike Scott, snapped this photo of me on the summit. END_OF_DOCUMENT_TOKEN_TO_BE_REPLACED
This entry was posted on Friday, September 16th, 2022 at 7:30 pm and tagged with queen elizabeth and posted in Witnesses. You can follow any responses to this entry through the RSS 2.0 feed.
« The Queen of England Has Died
Divine Violence and the Character of God: by Claude Mariottini. A Review »