Have We Finally Found Sodom, the Ancient City Destroyed By Fire and Brimstone?

Those interested in biblical archaeology have perked up recently, as a paper published in the scientific magazine, Nature, suggests that “A Tunguska sized airburst destroyed Tall el-Hammam a Middle Bronze Age city in the Jordan Valley near the Dead Sea.”  Some archaeologists and other scholars identify Tall el-Hammam as the ancient site of the city of Sodom, where its destruction by “fire and brimstone” is recorded in Genesis 19.

The Nature paper describes evidence that shows that a large meteor, roughly the size of the Tunguska 1908 meteor strike in Russia, devastated a region on the eastern side of the Jordan River, around 1650 BCE.  Research shows that melted pottery and other artifacts found at Tall el-Hammam indicates that an explosion 1000 times more intense than the Hiroshima atomic bomb, wiped out the population of the region, and even deposited a large amount of salt, making the area uninhabitable for decades. 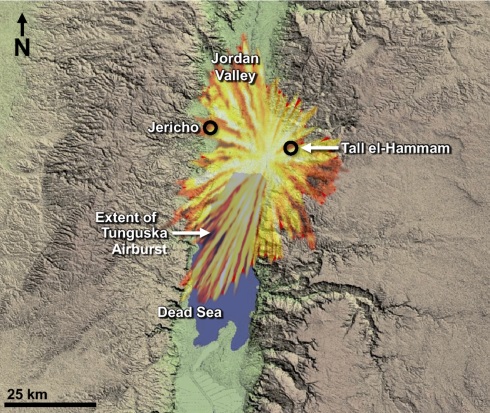 Some Christians have concluded from this paper that we now have strong scientific evidence, demonstrating the historical accuracy of this particular episode from the Bible. However, other Christian archaeologists and scholars are not persuaded. Archaeologist Todd Bolen, for example, argues that the location of Tall el-Hammam does not line up with the standard interpretation of Genesis 18:16, which some suggest indicates that Sodom was located nearer towards the southern end of the Dead Sea, as opposed to Tall el-Hammam’s location, north of the Dead Sea.

A more problematic objection to the story associated with the Nature paper comes from Dallas Seminary Old Testament bible scholar Eugene Merrill, who argues that the timeline for Tall el-Hammam’s destruction in about 1650 BCE does not line up with biblical chronology. Dr. Merrill follows what might be called a strict, literal interpretation of the numbers found in much of the Old Testament, which would place the destruction of Sodom much earlier, about 2067 BCE.  Dr. Merrill’s approach to biblical chronology is consistent with a belief in “Young Earth Creationism”, which places the creation of the world roughly 6000 years ago. He also adopts what is considered to be an Early Date theory of when the Exodus for Egypt occurred, in the 15th century BCE. Dr. Merrill identifies several problems with the 1650 BCE date for Sodom’s destruction:

Dr. Merrill suggests that the 1650 BCE date for Sodom’s destruction would require a chronology that fits within something like the following framework, a framework that Dr. Merrill believes does not fit within the Bible. Non-literal numbering estimates are highlighted below:

Dr. Steve Collins is perhaps the leading archaeologist who has studied the site at Tall el-Hammam, a committed evangelical Christian, and professor at Trinity Southwest University. Collins fully accepts the 1650 BCE date and location of Sodom at Tall el-Hammam. Collins argues that the arithmetic interpretation of numbers by Dr. Merrill is misleading, and that other biblical evidence lines up better with the 1650 BCE date and location of Sodom at Tall el-Hammam (from a YouTube video recorded at Tall el-Hammam). Much of Collins’ reasoning is aligned with arguments presented by the esteemed Egyptian archaeologist Kenneth Kitchen, and author of the comprehensive On the Reliability of the Old Testament., though it must be noted that Collins does not accept the so-called Late Date theory of when the Exodus happened, dated to the 13th century BCE.

This analysis begs the question: Is a bird in the hand worth two in the bush?

Nevertheless, the debate over the timing and location of Sodom’s destruction and whereabouts has not been settled by the Nature paper. But it does lend some credence to the argument that the basic historical chronology of the Bible is still credible, in an age where skepticism is the order of the day.

Clarke Morledge -- Computer Network Engineer, College of William and Mary... I hiked the Mount of the Holy Cross, one of the famous Colorado Fourteeners, with some friends in July, 2012. My buddy, Mike Scott, snapped this photo of me on the summit. END_OF_DOCUMENT_TOKEN_TO_BE_REPLACED
This entry was posted on Friday, September 24th, 2021 at 7:00 pm and tagged with sodom and posted in Apologetics. You can follow any responses to this entry through the RSS 2.0 feed.
« The Death of John Shelby Spong… (But His Ghost Lives On)
The Unseen Realm: Rediscovering the Supernatural World with Michael Heiser »

10 responses to “Have We Finally Found Sodom, the Ancient City Destroyed By Fire and Brimstone?”