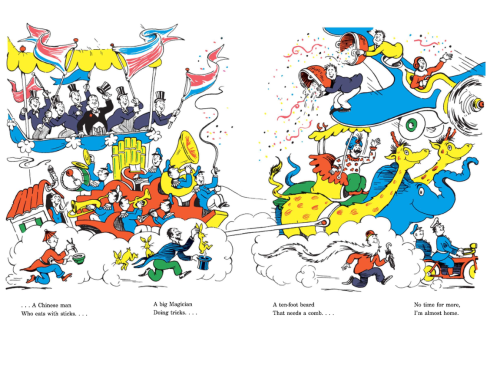 Critics of Dr. Seuss find the “Chinese man, Who eats with sticks” (lower left) to be racially offensive, found on this page from And to Think That I Saw It on Mulberry Street, recently taken off the market, due to pressure from woke-ness critics.

Did Dr. Seuss really get canceled? As with all of these “woke-ness” controversies, there is some grain of truth in every complaint.

In his earlier years, of the 1930s and 1940s, Theodor Seuss Geisel, a.k.a “Dr. Seuss,” did advertising and political cartoons, featuring some occasional racist themes, which was not terribly unusual during those times. But his greatest legacy was the series of children’s books, that I feasted on as a kid. Over time, Seuss’ cartoon books matured, overcoming earlier missteps, and have continued to have tremendous staying power, for newer generations of children.

Perhaps the Dr. Seuss Enterprises took the step to cease publication of certain titles, such as Seuss’ first children’s book And To Think That I Saw It On Mulberry Street, to preemptively assuage Seuss’ anti-racism critics. After all, The Cat and the Hat has for years received accusations of promoting racist stereotypes. But it would be a shame to cancel The Cat and the Hat.

The trend towards taking certain written materials out of the marketplace is deeply disturbing. Private companies have the right to do what they want, but it does not bode well for instilling the value of freedom of speech, for rising generations. As a Christian, where freedom of speech is threatened, the threat against the freedom of religious expression is not too far behind.

Thankfully, there are others, who would not consider themselves conservative Christians, who share the same concerns. The Intellectual Dark Web is a loose collection of mainly (though not exclusively) classic liberal thinkers who believe that the contemporary fascination with “woke-ness” and various forms of critical theory present the greatest threat to Western civilization, in our day. Among them is Brett Weinstein, an evolutionary biologist, who makes no particular claim to having a Christian faith. But Weinstein has served us well by offering his own Seussian verse, in less than 4-minutes, in an effort to stem the tide against unfettered “woke-ness.” I hope you enjoy this.

The woke-mob may think that they know what is best and morally correct for the rest of us, but I would rather make those decisions for myself, thank you very much.

By the way, speaking of the Intellectual Dark Web, Jordan Peterson is back!! Here is an interview Jordan has with Jonathan Pageau, an Eastern Orthodox icon-carver. Great, thoughtful conversation!

Clarke Morledge -- Computer Network Engineer, College of William and Mary... I hiked the Mount of the Holy Cross, one of the famous Colorado Fourteeners, with some friends in July, 2012. My buddy, Mike Scott, snapped this photo of me on the summit. END_OF_DOCUMENT_TOKEN_TO_BE_REPLACED
This entry was posted on Monday, March 8th, 2021 at 6:30 pm and tagged with brett Weinstein, dr. seuss, free speech, intellectual dark web, jordan peterson and posted in Topics. You can follow any responses to this entry through the RSS 2.0 feed.
« More QAnon Nonsense: March 4 as Trump’s True Inauguration Day?
Women Should Keep Silent in Church? : A Corinthian Conundrum Considered »

2 responses to “Let Loose The Seuss!!”