Who Was Lilith? Did Adam Have a First Wife Prior to Eve?

Readers of the Book of Genesis will know that Adam’s first wife was Eve. But some have suggested that the story of Genesis was deliberately changed by the Christian church to hide the fact that Adam had a wife prior to Eve, and her name was Lilith. Is there any truth to this conspiracy claim?

It is true that according to medieval Jewish folklore, that there is a story about a Lilith, who was Adam’s first wife. The most obvious problem with the conspiracy claim is that one of the first Jewish writings to definitively tie Lilith to Adam was a mystical text, the Alphabet of Sirach, composed somewhere between the years 700 C.E. to 1000 C.E.  This is several hundred of years after the New Testament was already completed, and well over a thousand years after the story of Adam and Eve made its way into the Bible. 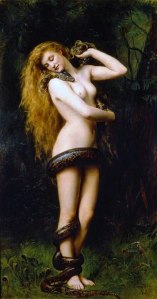 What gives a little bit of life to the conspiracy claim is that a legend about a female demon, Lilith, did originate in Sumerian and Babylonian writings, centuries before Christ. Tales about Lilith crept into later Jewish writings. But the Alphabet of Sirach was one of the first written works to have made any serious connection between Adam and Lilith, and the Christian church had already been in existence for several centuries.

Dr. Michael Heiser has a 13-minute video explaining the full story about Lilith, including why medieval Jewish scribes invested in the Lilith story, and why the conspiracy theory about her existence as Adam’s first wife being suppressed can be easily dismissed.

Clarke Morledge -- Computer Network Engineer, College of William and Mary... I hiked the Mount of the Holy Cross, one of the famous Colorado Fourteeners, with some friends in July, 2012. My buddy, Mike Scott, snapped this photo of me on the summit. END_OF_DOCUMENT_TOKEN_TO_BE_REPLACED
This entry was posted on Tuesday, August 25th, 2020 at 6:00 pm and tagged with Adam and Eve, Lilith, second temple judaism and posted in Apologetics. You can follow any responses to this entry through the RSS 2.0 feed.
« Angels, by Michael Heiser, a Review
Was Jesus an Essene? »

4 responses to “Who Was Lilith? Did Adam Have a First Wife Prior to Eve?”