In this time of racial unrest, where genuine, peaceful efforts at positive reform get intermingled with violence and ideologically-driven “critical theory” gone mad, it is difficult to parse through what Christians can actively support, versus those things we should reject. However, today marks an emerging holiday celebration that we can all get behind: Juneteenth.

On June 19, 1865, Unions troops led by Major General Gordon Granger, entered Galveston, Texas, to officially deliver and enforce the Emancipation Proclamation. The Emancipation Proclamation had been first declared in January, 1863, but the Civil War delayed efforts to effectively announce that enslaved persons throughout the “slave states” had been freed. Now that General Robert E. Lee had surrendered his Army of Northern Virginia at Appomattox a few months earlier, the way was now clear to more peacefully correct the injustice endured by countless African Americans.

It is important to remember, though, that Juneteenth was but one step towards racial reconciliation. When the Emancipation Proclamation was first made, in 1863, it ironically did not apply to Union-held territories in the South, at that time during the war. For example, in my hometown, Williamsburg, Virginia, the Emancipation Proclamation had officially freed slaves living in James City County, in Confederate territory, but it did not free slaves living in York County, which was then in Union territory. Therefore, slaves living south of Duke of Gloucestor Street, in James City County, were free, but slaves living north of Duke of Gloucestor Street, in York County, were technically not! It was not until the passing of the Thirteenth Amendment to the Constitution, later in December of 1865, that slavery was officially ended everywhere in the United States, without exception.

In a way, the incompleteness of what Juneteenth accomplished underscores the fact that official proclamation might be one thing, but the reality on the ground can be something else altogether. Considering that America is still undergoing race related trials over 150 years after the end of the Civil War confirms this fact. The ramifications of racial-based slavery, that many Christians were complicit in, supported by the acceptance of some really bad misinterpretation of the Bible, has had far reaching effects beyond questions about race, that plague us today. We as Christians would do well in continuing to remember Juneteenth.

On my bike ride today, I rode near the Charles City County, Virginia courthouse. Charles City County is one of the oldest communities, founded by the English in the early 17th century. It is also home to several stately plantations, that dot along the James River, a few of which are open to visitation today. These plantations were supported by hundreds of African American slaves, whose descendants make up the majority population in the county. Below is a photograph I took of the Confederate war memorial, with the newer courthouse building in the background. Below that is another photograph, taken only a few hundred feet from the courthouse, where Isaac Brandon, an African American with a wife and eight children, was awaiting trial, after being charged with assaulting a white woman. Brandon was taken from the jail and lynched by a white mob, in 1892, on a tree, on this hillside. No one from the mob was ever charged or arrested for their activities. 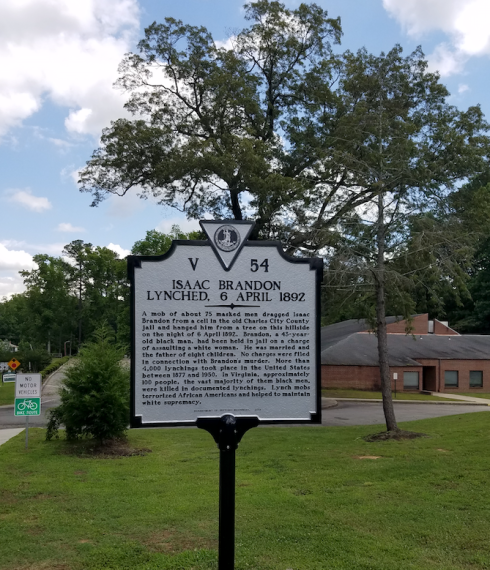 Clarke Morledge -- Computer Network Engineer, College of William and Mary... I hiked the Mount of the Holy Cross, one of the famous Colorado Fourteeners, with some friends in July, 2012. My buddy, Mike Scott, snapped this photo of me on the summit. END_OF_DOCUMENT_TOKEN_TO_BE_REPLACED
This entry was posted on Friday, June 19th, 2020 at 2:38 pm and tagged with juneteenth, racism and posted in Topics. You can follow any responses to this entry through the RSS 2.0 feed.
« Carl Trueman on Critical Theory, and J.K. Rowling as the Victim of Cancel Culture… and More on Race
A Genetic or Genealogical Adam and Eve? (… An Alternative to “Deconstruction”) »