Carl Trueman on Why I Am a Protestant

Carl Trueman, a professor of history at Grove City College, the alma matter of several of my Christian forefathers, has written a brief essay, explaining “Why I Am a Protestant,” particularly as it relates to our current cultural situation. Trueman sums up pretty much where I stand on the Protestant question. For a deeper look, may I suggest Kevin Vanhoozer’s work towards a “Mere Protestant” statement of faith, for a “A Reforming Catholic Confession.”

Nevertheless, I am quite fine with the Nicene-Constantinople Creed (sans the Filioque) and the Apostle’s Creed, too, as great summaries of what C.S. Lewis called, “Mere Christianity.”

OK. Trueman’s essay does have a wee bit of snark to it, but he does appeal to the recently sainted, John Henry Newman for support:

As the years go by, being a Protestant becomes easier and easier for me. Pope Francis is, after all, the gift that keeps on giving. What with his apparent desire to turn the Roman Catholic Church into a standard form of liberal Protestantism (but with a bit more color), his program is less than compelling to anyone who, to borrow a phrase from Newman, is deep in history.

However, Trueman is not soft on the problems of Protestantism:

The myriad magisteria of multitudes of parachurch ministries offer tin-pot spheres of influence for a plethora of popelets. And doctrinal orthodoxy is at a premium: A narrow focus on scriptural authority has led to a neglect of the catholic creedal dimensions of the faith.

Trueman highlights why we need a truly more “Catholic” expression of faith today, in a world where secularism reigns supreme:

Reformation Day … brings the temptation of nostalgia… that it often looks to the wrong eras for guidance in the present. The real analogs to today are not found in the High Middle Ages or the sixteenth and seventeenth centuries. Reformation Protestantism occurred within the cultural context of Christendom. For all of the important differences between Luther and Leo X, Calvin and Trent, Catholics and Protestants shared a common assumption that some form of Christianity would provide the dominant culture…But that is not our world today. In modern society, few have time for Christianity of any flavor. The basic Christian context of our Reformation forefathers is long gone and, if not completely forgotten, utterly despised. We must look to an earlier time for help: Specifically, to the second and third centuries.

Sober words for sure. Read the whole essay here.

Bottom line: There are still some very good reasons to be Protestant. But in many ways, Protestants and Roman Catholics (along with Eastern Orthodox) have a lot more in common with one another, that is often given credit. Healing the gaps that exists between Protestants, Roman Catholics, and Eastern Orthodox will go a long towards enhancing the witness of the church in an increasingly secular world. 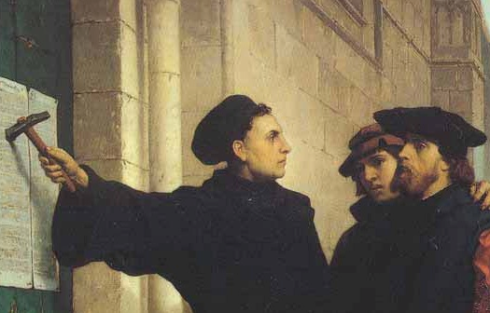 Clarke Morledge -- Computer Network Engineer, College of William and Mary... I hiked the Mount of the Holy Cross, one of the famous Colorado Fourteeners, with some friends in July, 2012. My buddy, Mike Scott, snapped this photo of me on the summit. END_OF_DOCUMENT_TOKEN_TO_BE_REPLACED
This entry was posted on Friday, November 1st, 2019 at 8:00 pm and tagged with Carl Trueman, Mere Protestantism and posted in Apologetics. You can follow any responses to this entry through the RSS 2.0 feed.
« Bishop Robert Barron at the Graves of Tolkien and Lewis
When A Theologian Goes Rogue: David Bentley Hart’s Universalism »